Today is a sad day that Hubby and I have lived through numerous times in the last few years. Despite having to go through the wrenching pain of separation and saying good-bye, we hope that our decisions are for the best and that those we left behind will remember us with affection if and when we see them again. I am, of course, talking about our cars.

The first, and probably most difficult parting took place in the Midwest back in 2005 when we left the flat, brown prairies for the sweltering heat of New Delhi. Trinity, our 2004 Toyota Matrix XRS, was a beauty of engineering – a six speed manual transmission with all the bells and whistles deserving of a first true love. (Not that we didn’t love our first car, a Ford Contour named Sporty, but deep down I loved Trinity more.) Trinity was purchased back by the dealer and all we have left of her are our tear-stained memories.

Perhaps that’s why we made a promise to ourselves not to become too emotionally attached to Red, the Honda City we drove in Delhi. Technically, Red belonged to the Organization that Hubby worked for but since he lived with us, we considered him ours for the year we lived there. (Yes, we not only give names but also assign sexes to our cars. Sporty, in case you were wondering, was also a boy.) 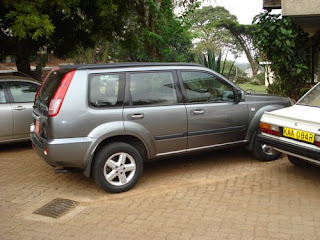 Upon our arrival in Nairobi, we discovered that taxis were stupid expensive, which meant that we needed to purchase a car post haste. We took into account the pot holed roads and our budget and eventually decided that a Nissan X-Trail was the car for us. The station wagon-like SUV had great clearance, got good mileage, and fit in our budget. As my father would say, it was a done deal.

We purchased our X-Trail several months after the release of the debacle that was “X-Men the Last Stand.” As a longtime comic book geek and given the X-Name, I immediately decided that our new car would be named after an X-Man, preferably Storm or Rogue. The latter has always been my favorite X-Man but the former, whose real name is Ororo Munroe, is Kenyan. I explained my thought process to several men in the transportation department of Hubby’s office and they voted to name her Storm.

After two great years together, Hubby’s new job took us away from Kenya to Egypt where cars drive on the American side of the road. Sadly, this meant that we would have to 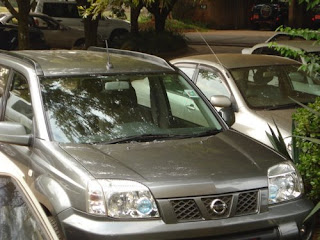 say good-bye to Storm. We posted notices in newsletters, bulletin boards, and even with random strangers hoping to find her a good home. Unfortunately, we were unable to do so before we left East Africa.

Earlier this week, Hubby called me from work and told me that the deed was done. We had finally sold Storm to a friend of a friend, of a friend. Even though I haven’t seen the grey X-Trail in months, I am still somewhat vaklempt about the break.

Several people have asked us why we don’t have a car here in Cairo and we’ve given them the usual answers about the insanity of driving in this city, the utter lack of parking in our neighborhood, and the cost of buying a car without the duty free privileges we have become used to in recent years. But when all is said and done, I think that Hubby and I are simply afraid to love again.

Goodbye Storm. We knew you when.
Posted by MsTypo at 1:31 AM

We do not usually name our cars, but we do grow very attached. I suggested we name our current SUV Dora, because she's an Explorer, but it just hasn't stuck. I used to own the ugliest car in the world - my friends called it Thumper... not for the cute rabbit, but for an unfortunate involvement in a multi-vehicle (not my fault) accident involving a body... kinda awful, but yea... I even had a hard time letting go of that car. Left it sitting there forlornly at the dealer as I drove off in a shiny new Amigo... sigh... I can still see it looking at me.

I feel your pain. Bye-bye Storm, hope you have a great new home.

Oh - those are some of the funniest and sweetest love stories ever! LOL!

We have a red Citroen that we call Grodan - that's Swedish for 'The Frog'... I don't get attache to cars, but the kids were very sorry when we sold Frog the First in the summer and got ourselves a new one, Frog the Second...

The Norwegian customs service used to allow new residents to ship cars into the country without duties and taxes. We were originally planning on bringing my Nissan Versa, Stewie, over to Oslo. Now we've found out that this no longer applies, and anyone shipping a car has to pay the tariffs, which are so expensive! So we had to give Stewie to my father, who loves him, but still... he was mine!!!! I feel your pain, it is hard to leave a great car behind.

I get it... the only thing that made me break down and cry when packing up to leave Australia - - when they came to pick up my Grand Jeep Cherokee... I loved that car!

Even though a vehicle is handy, there is also something freeing about not having one. Especially in a big city.

Do you know how much I love that you name your cars???? I'm currently driving Naughty Audi. It goes too fast. Before that, it was JET BLACK ~ finest truck in all the land. I was sad to see JET BLACK go.

Storm was one of my favorite X-men as well. I once had a doll that looked just like her, with the glorious skin and white hair. (Before she existed, so that probably predisposed me to like the character.)
I have never named my cars (due to an unfortunate incident with my first, a Firenza that died in traffic on a highway, but we all miss our Toyota Siena desperately. We are test driving a Passat next week, but it will not replace the Siena in our hearts.

We left a car behind to move to Venezuela and I still weep over that. But, I am now in love with our gas-guzzling SUV because it only costs $1.50 to fill the tank.

The Grizemobile was one of our favourite family cars for many years but someone in the family didn't seem to want to have her at the wedding, so she had to leave.
The yellow Honda whose floor disintegrated and, if you were in the back seat, you had to keep your feet up or run along the road like the Flintstones, was also another family favourite. When he died, he provided a little yellow dress for our little daughter. Nice...
merthyrmum

Food shortages in Venezuela will never be as bad as they have been/are in parts of Africa of Russia after the cold war. And, for that I am grateful, but I'd just as soon live without them entirely...if possible.

We have an X-Trail and I totally understand your feelings! This is the first vehicle that I love completely and it would be very hard for me to sell. Luckily we have no plans to.
But I loved the story of your past "loves"!

Awwww! I felt the same way when I gave up my Honda Element when we moved to Germany!. Still not over it.

I have never been attached to any of my cars, though I always look forward to buying a new one!!

My parents had a car named Booger because it was the color of boogers.

Sorry for the loss and congrats on the Sale ;)!

aw! the pain of letting go! I let go of my 1st car and I was sad but then I got a better one, then just last week, we let go of my hubby's car because he is old- we called him Jimmy. We're down to one car but who knows, we might find a different "pal" to love too! And yes, I agree with you not having any car in that part of the world. Drivers there are C-R-A-Z-Y!!!

but srsly, i do miss my little purple '96 geo tracker. it didn't have a name per se, but friends called it the barbie car.

congrats on the sale!