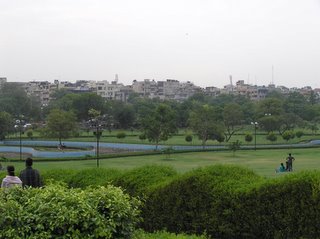 Every so often I look around me and notice that Delhi isn't really all that bad.

The people who put Delhi together wanted a city that was beautiful to the eye as well as the spirit. The photo to the left was taken back in June near the Gandhi Smriti. Does this look like a developing country to you? Me neither.

Beautiful trees showing off more shades of green than a flock of peacocks line almost all the major roads here. Shabby buildings are almost hidden by the intense grandeur of foliage that shades the dingy streets of Delhi. The odd brown and grey squirrel can be seen 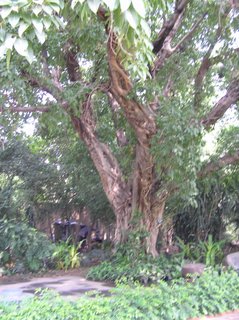 hopping from branch to branch. Hubby says that they're actually rats but, romantic that I am, I prefer to think that they're squirrels.

The tree to your right grows in an unassuming corner of the gardens at the Nehru National Museum. I admit that I'm a bit of a tree nut but you must admit that the knarly bark of this wizened tree makes for a beautiful spot to lunch under.

Don't get me wrong, Delhi can be ugly. There are days when I want to cry when I see the beggars on the streets that come up to my window asking for a spare Rupee. Children with missing or broken limbs tap on my window each day; their plaintive expressions tearing into my heart.

One of my favourite streets in all of Delhi is Niti Marg. It borders the back of some of the larger embassies on one side and Nehru Park on the other. During the day this street reminds me a lot of Mississauga for some reason. Mississauga but nicer. Just a few blocks away at the intersection of Africa Avenue and Ring Road are some of the most persistent beggars in town... and the ones that most often break my heart.

Yes, Delhi is beautiful city but hides a sad underbelly of poverty.
Posted by MsTypo at 6:49 AM

Squirrels are a menace when they eat the bird seed. They do however keep the dog from going to fat. Perhaps they are different out there?
Merthyr