Already There and Long Gone

Thanks for the memories, Australia.
I’ll see you again soon. 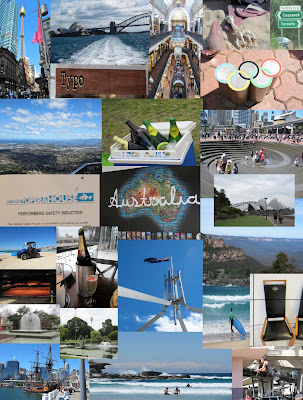 Filling in the Blanks

A few weeks ago, one of my friends called me Carmen and asked “where in the world” I was that day. I laughed aloud when I typed my response and explained I was still in Sydney, Australia. Although I may no longer live the life of an Expat Princess, I still haven’t given up my wandering ways and if I had my druthers I never would. Reality, however, is a horrible affliction that has invaded my life and bank account like succubus on the prowl.

I have put off that dreaded fun-sucking demon for at least another few months for the sake of my Devoted Readers. Over the past five years, I have written about and lived on five continents and that seems a little lazy to me. What kind of blogging tour guide would I be if I couldn’t tell you about life in South America? So for the sake of the blog, that’s where I’m headed next.

Argentina and Brazil are my first stops followed by a super special Christmas pit stop that I’m keeping secret as a surprise. So please continue to watch this space and forgive the occasional silences as I look for Internet cafés while I’m on the road.

I’m still not sure where all this traveling is leading me. Nor do I know when I’m going to give in to the necessities of adulthood, head home to grow up, and get a job. For now, I’m enjoying living out of my suitcase and through this blog. I am literally living my dream and don’t plan to wake up any time soon.

South America better prepare itself because Hurricane Typo is on her way.
Posted by MsTypo at 12:17 AM 8 comments:

Of Hats and Horses 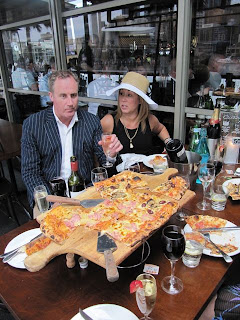 I grew up in a house that paused every year for the Kentucky Derby. Every year since I can remember, my father has made the trek South to join the “Run for the Roses” to see the year’s best 3-year-olds cross the line at Churchill Downs. The North American community may follow the Triple Crown like a pack of teenage girls on the hunt for Sparkle Vamps, but they have nothing on Australia’s almost 150-year obsession with the first Tuesday of November.

They call it “the race that stops a nation” and they aren’t kidding. Before post-time, office buildings empty and nationwide productivity drops to nil as everyone gravitates to the nearest television to watch the only thing on TV that matters – the Melbourne Cup. Aussies love their racing so much that the day is even a holiday in Melbourne. For weeks in advance, ladies can be found trying on cocktail dresses and, more importantly, finding the perfect hat to wear to one of the thousands of viewing parties held across the country. 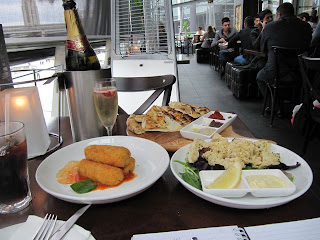 Ever a vigilant reporter of local customs, I naturally threw myself into Melbourne Cup fever. On the morning of the big race, I primped and preened before donning a new dress, borrowed heels, and a fluffy white floral headpiece. I probably looked like a reject from a bridesmaid-themed prom but I felt pretty as I made way across Darling Harbour to Criniti’s for brunch.

I put a great deal of thought and research into choosing my Cup Day brunch. A good meal at a fair price is important but all you can drink sparkling wine trumps all. After being seated on the balcony, I quickly put in my order for my first course of munchies and a bottle of bubbly to get me started. I dug into my plate of flat bread and dips and was amused to note my solo table received plates piled with as much food as the ones bound for the larger groups around me. This soon became a little intimidating as a plate of calamari and a second of croquettes soon followed. 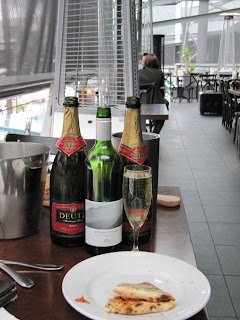 The tables around me filled quickly with smartly dressed men and fantastically hatted women. Well into my first bottle of sparkling wine, and halfway into my incredibly tasty plate of pasta, the table next to me sent their men off to place bets on the race. Never one to shy away from not having to things for myself, I asked them to place one for me too. After all, the restaurant may have taken it amiss if I had disappeared with my purse halfway through the meal. It was at this point when the ladies took pity on my solo status and insisted I join them.

The brilliantly amusing women, it turned out, were flight attendants on a 56-hour layover. They kept refilling my glass while we chatted about everything under the sun and continued to nibble. Shortly after the boys returned with our bets, my pizza course arrived and I shared the huge board with my new friends while they waited for their own pizza to arrive. 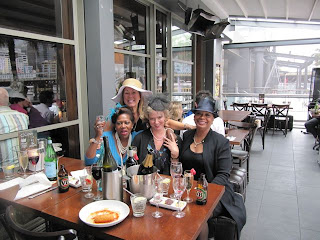 Soon one of the waiters came out to tell us the big moment had finally arrived – the horses were ready at the post and the race was about to begin. Everyone rushed inside to find a spot in front of one of the large flat-screen televisions. And then they were off! I yelled at the screen, I stamped my foot, I cheered, I clapped; I became a temporary Aussie joined in spirit with millions of others hooked for two minutes on one goal – the finish line at Flemington Racecourse.

My horse, I should state for the record, did not win, place, or show yet I still can’t find it in myself to be disappointed in the outcome of the day. I skipped the final course and stumbled home to pass out on my bunk content in the knowledge that I drank too much, ate too little, made some wonderful new friends, and had a fantabulous day.
Posted by MsTypo at 12:54 AM 4 comments:
Newer Posts Older Posts Home
Subscribe to: Posts (Atom)