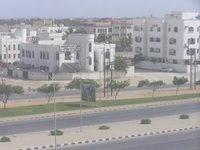 As you may (or may not) know our weekend in Kenya was planned so that we would return on Monday. Then Hubby wouldn’t lose any work time, as I would drop him off on our way home. Well the best-laid plans and all that…

We left Nairobi on Sunday evening somewhat late as our Kenya Airways flight was delayed by a couple of hours. Engrossed in “City of Djinns” (yeah, I know I was supposed to read this months ago), the delay didn’t bother me all that much. Two hours after our scheduled departure time, they finally initiated the scrum.

The scrum, for those of you who may not be knowing (as they say in Delhi), is what inevitably happens despite an airline’s best attempts to have an organized progression to board the plane in an orderly fashion. Instead, everybody runs and elbows their way to the gate in an attempt to be the first ones in their seats. Amateurs. Hubby and I, as you would expect, elbowed AND followed the rules and were among the first to be seated. Cheating, when accompanied with rules, really does pay!

But back to the real story…

Tired as I was, I pulled the unusual-for-me maneuver of napping after take off. About an hour or two into the flight, I heard the oddest thing just outside of my dream: The captain was calling the head steward to join him in the cockpit. That couldn’t be good. 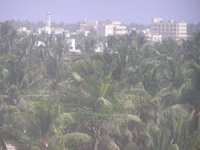 Ten minutes later, Hubby was now snoring quietly next to me when the captain came over the speakers once again. The cockpit window had cracked in two places and we would be making an emergency landing in Salalah, Oman. But we shouldn’t worry because everything was OK and the landing was just a precaution.

Well I was certainly awake now!

Rumor later had it that when we turned around for Oman, we were actually somewhere out over the Indian Ocean. I don’t know for sure if this was true, but it did take almost an hour from announcement to touch down. It wasn’t until the plane’s wheels finally hit the tarmac that Hubby finally awoke and found out what had been happening.

Salalah has a tiny little airport that proved unsuited to housing, even temporarily, 200-plus people. It took two hours for the Captain to announce that the earliest they could get the needed part was 12:30 that afternoon. Since dawn was just breaking over the sandy dunes of the desert this wasn’t really great news to me or the other sleepy passengers.

A promise of a comfy hotel to hole up in while the plane was being fixed was easier said than done. Hubby and I were two of only a handful of people who wouldn’t require a visa to legally enter Oman. After another hour or so of negotiating, a decision was finally reached: everybody would surrender their passports before they left the airport. This would, in theory, ensure our desire to get back on the plane of doom and go back home. Hubby and I agreed to this against our better judgment because were really tired and wanted a bed to lie down in.

The hotel proved to be a big of auction. “Family of 5!” “I need a single – just 1!” “Double – me and my wife! Please double!” The calls down the length of the hotel’s check-in counter and became more and more insistent as people began to walk away with their hard won keys. Hubby’s height once again worked in our favor and we were given a room (a double for me and my husband) with surprising expediency.

Having fallen asleep only minutes after opening the door to our large if dingy room, Hubby and I totally misse 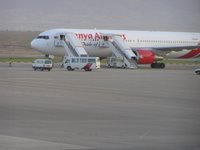 d breakfast. A refreshing nap and relaxing shower completed the package and were ready for lunch and then to leave.

I feel that I should note here that Oman is really quite nice if you’re into desert countries. The people were extremely kind and solicitous in making sure that we were made comfortable and had whatever was needed to get us through our interminable sojourn in their country. Although it was too far from our hotel to actually eat there, we even saw a KFC. I wonder if the Omani people prefer Original Recipe or Extra Crispy?

Long story short (way too late), we didn’t leave the hotel until 11:15 that evening. As the bus dropped us off in front of the airport, we both took note of the Kenya Air jet on the tarmac and hoped that it was good to go. (Of course, if they had called Apple Auto Glass like I suggested, we would have been out of there hours ago!) As our luck for the day would have it, the plane didn’t actually take off until after 2 a.m.

Adding a new country to our list was fun but we were ready to go home. The beggars, blistering heat, and dust of Delhi were calling to us like the Sirens of legend. Well, like the Sirens but less good looking and desirable. Anyways, ahead of us, still lay four hours to Mumbai plus the negotiations to get us back to Delhi.

I may never travel again.
Posted by MsTypo at 7:20 AM

Only one other country? Boo Hoo--I thought you wanted to go to Egypt?
And ummm,something tells me you'll be "wandering the World" again soon!
Merthyrmum

You sound remarkably not-pissed-off about it all!!!!!