On Thursday night Hubby and I had dinner and drinks with a potential new inmate, Dane. Dane is in town interviewing for a job of some sort with Hubby’s Organization and was suitably pessimistic about his chances while we dined. His biggest concern wasn’t an offer letter but rather if his wife would want to uproot herself and the kids to move to a foreign country just so her husband could take this job. 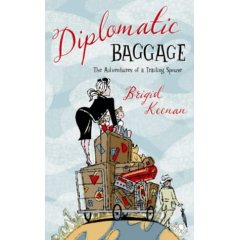 This is the question that confronts many of we so-called “trailing spouses” (or TS for short). I won’t comment on the male trailing spouses because I sincerely think that it is, in so many subtle ways, harder on them than we women but I don’t know their story: I only know mine. The difficulties facing the trailing spouse are summed up rather nicely in the pre-moving for the first time for Hubby book “The Expert Expatriate.” And once you’ve been in the life for a while the next absolute must read is “Diplomatic Baggage” by Brigid Keenan, which I now rank among my favorite books. (Props to the Twisted Threads Ladies back in Delhi for turning me on to it last May.)

Dane felt that his wife wouldn’t mind the move -- it was the giving up her job part she was having troubles with. I looked at him and Hubby each for about a minute while they commiserated and then let into them. “Of course that’s hard! Look at you two. You identify yourselves as Nuclear Underwater Basket Weavers but you expect your wives to give up that part of their identities so that you can pursue your latest whim of a job!” They made jokes about their jobs being their identities and ignored the fact that I made have actually had a point.

I don’t for a minute regret giving up my job so that Hubby could pursue his dreams. When I met him, he was talking about living and working in developing countries; so I knew going in that this would be part of the deal eventually. But it doesn’t mean that it isn’t difficult to be seen as someone who came with him, much like the TV, the books, and the fridge with an importance found somewhere in the middle of that list. Not by him, mind you, but by the people we meet.

We often go out for dinners or drinks and meet people who pay attention to me for a few moments and ask what I do. I must then explain that I currently am setting up house, volunteering and keeping busy with various clubs, organizations and board duties. (Back in Delhi this was true and will eventually be true here in Nairobi.) The strangers then smile at me blandly and talk about their incredibly amazing job that brought them to this part of the world and, after a few moments, turn to the next person in the conversation line.

The trailing spouse has no identity past that of her husband. Never mind that some of the ladies I know were once teachers, nurses, doctors, or call center gurus; they are now Mrs. Husband. They are seen as extensions of the man who brought them to the expat party rather than individuals unto themselves. I would, I realize, be granted a few extra points if I could say I was raising our children: then I’d be a Mother (capital M applies). Instead I’m just Useless wife (capital U applies).

Before you get on me, yes I realize that I could get a job and hope to do so in the new year. But it isn’t that easy: many companies won’t hire the TS because they know we’re going to leave, we probably don’t have the correct visas, and they feel we won’t agree to local wages which is likely what we’d have to accept. People attached to embassies have it slightly easier as the embassies will often hire the wives in a myriad of positions that aren’t open to the public. By the same measure, I also know wives who simply and flat out aren’t permitted to work by virtue of their husband’s contracts.

I always thought it would be a dream come true to not have to work and be able to sit around and have time to myself. Be careful what you wish for, young Jedi, lest that dream turn into reality. Don’t get me wrong, this is a great lifestyle and I enjoy traveling around the world and experiencing different cultures. I wouldn’t trade what Hubby and I have been through and will go through over the next many years of living abroad for anything. But some day I’d like to have the chance to figure out what I’m doing here other than supporting him and his dreams.

It’s like a line from a song whose title I don’t remember, “I’ve been paradise but I’ve never been to me.”
Posted by MsTypo at 2:18 AM

If the apt. deal works out (stairs and all) and a car gets chosen and the visitors leave, perhaps you will get an identity you'll like??
You are still perfect so stop wining--whoops--whining.
Merthyr in Windsor