Since arriving in Nairobi, Hubby and I have discovered a new program for which to build small shrines and center our lives around. The most surprising part, for those of you who know us well, is that the new show isn’t one of our typical WB or Fox mind melters. Which is not to say that we aren’t keeping up with the latest seasons of “The OC” and “Gilmore Girls” but rather that our hearts have been stolen by the Discovery Channel.

Yes, you read that last part correctly: we are obsessed with a show from the Discovery Channel and aren’t ashamed to scream it from the highest heights or blog about it on the Internet. We discovered (if you’ll pardon the pun) our new 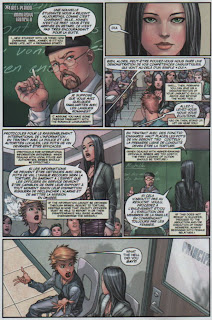 sweetheart by accident and now find ourselves rushing home from dinner or the bar so that we can catch the latest three-year-old episode of this especially amusing and enlightening program.

I’m guessing that by now you’ve either guessed which show (Bravo!) or are wondering what the heck I’m talking about. As the smarties in the bunch could tell you, I’m talking about “Mythbusters,” which stars Adam Savage and Jamie Hyneman, two special effects geeks turned TV busters. These guys are so cool they've even appeared in the Marvel Comic X23!

Those of you who have seen the show know that while the science behind the show is spot on and regularly enlightening, the hosts themselves are what keep the fans coming back week after week. Adam and Jamie have an on screen chemistry that hovers somewhere between brotherly tolerance and sincere mutual dislike. Hubby does

an amazingly amusing and spot-on impression of the senior buster, Jamie, that has become slightly annoying through repetition but he tells me is still cute. Adam and Jamie aside, the real star of the show would have to be Buster – the much maligned crash test dummy who tests all of the more deadly and injury inducing myths. That poor Dummy seriously needs to fire his agent!

But you’re probably wondering who does all the work on the show. Well that would be the Junior Mythbusters – or, as Hubby likes to refer to them: Kari and a bunch of other people who aren’t as hot as Kari. Do I even need to mention that she’s a (dyed) redhead (Hubby note: dude, does that matter??)? Silly cute but predictable boys.

Now that you’ve met the team, I’ll have to explain exactly what Mythbusting is. The team takes urban myths and legends and tries to disprove them using (semi) sound science. Last night’s episode, for example, involved exploding jaw breakers (confirmed),

exploding PVC piping (busted), and deadly playing cards (busted). They tested the myths using various homemade gadgets, which included a literal iron jaw, a giant iron static ball, and a super-human, mechanical card tosser. Name an urban myth and they’ve probably attempted to bust it: from escaping from Alcatraz (plausible) and dying in quicksand (busted) to Archimedes death ray (busted) or the best way to cool a six-pack of beer (You’ll have to come over for a party to find out the answer to this one!).

This show seriously redefines fun and cool. Plus, for those us stuck in Kenya and wishing they were back in California, it gives them a little piece of home. Mythbusters, much like our earlier World Strong Man obsession is a very, very good thing. Plus its edu-ma-cation-al!
Posted by MsTypo at 6:32 AM