Earlier this week, I asked you all which bed I should buy: the boring futon or the beautiful daybed. I struggled with the decision, as I’m sure you can imagine, and not only because I’m the world’s most indecisive person. As all of you women out there can understand, this was more than a decorating dilemma: I would also have to put up with a certain Mr. Cheapo (aka Mr. Frugal, aka Mr. My-Wife-Spends-All-Our-Money, aka Hubby) if he didn’t like how I spent “his” money.

The daybed, as you may recall, was more expensive and thus sure to trigger an eventual response from the aforementioned holder of the purse stings if (when) it was selected. But it was sooooo pretty!!! And if there’s one thing all those John Hughes movies about high school taught me, it’s that pretty is always better than not pretty. (Oh, and some claptrap about the importance of friendship but I tuned that part out while I grooved to that always impeccable soundtrack of the 80’s.) 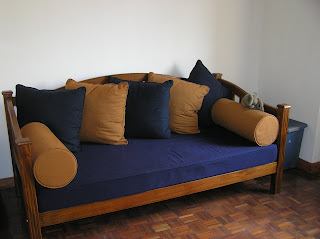 Is anyone here really surprised by my eventual choice? I didn’t think so.

(Hubby Edit by Typ0: He wants me to point out that he did not begrudge the cost as it is an investment, he really liked the daybed, and that he isn’t cheap... much.)
Posted by MsTypo at 6:16 AM

It is very nice...is that the knitting bin beside the ....bed...?
merthyrmum

it looks like you've put Deb's in the corener of the dining room or something!!! HA HA HA