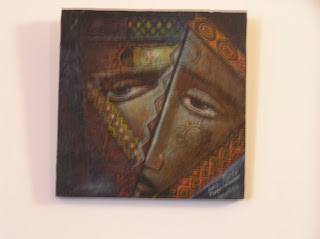 I’ve talked about the city and I’ve discussed the food but the one thing I haven’t described yet is the shopping scene in Addis. And with Shar as my shopping buddy and incredibly knowledgeable guide I did quite a bit of shopping! From roadside souvenirs and antiques to first-rate art, this city has everything a girl could ever want in a shopping venue.

On Thursday Shar eased me into things by taking me a cool outdoor venue. A line of shops bordered the road and we were prepared to breach the walls of each and every one in the quest for the perfect souvenirs for our families at home. We browsed and bargained our way down the block and I ended up with gifts for my niece, my mother and even Hubby’s sister-in-law.

Next up on our tour of Addis was an art/antique store called St. George where I realized that not being good at math can be a very bad thing. Hubby had mentioned at one point that the exchange rate was such that I could simply “drop the last zero.” That in mind, I perused the jewelry collection (Ethiopia is famous for their great silver) and, with Shar’s help, narrowed down my choices to two gorgeous necklaces. The first was a moonstone piece that was a wee bit pricey. The second was an antique silver chain with a lovely silver cross. The problem with this one was the cross screamed, “CROSS” when I wore it. After some debate with St. George’s owner I swapped out the cross for a rather cool heart shaped pendant that matched the dense chain better than the cross had. 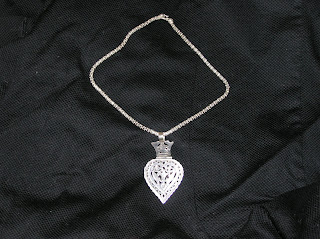 Having picked out a “me” gift, Shar and I continued to wander throughout the remainder of the shop. I laughed and told her that if Hubby and I lived in Addis I would likely have bought up the shop and refurnished our home. Instead I skipped past the un-ship-able furniture and onto the lovely (and portable) textiles where I picked out yet another gift for my mother.

I mentioned how my math was based on Hubby’s assertions right? So, really, the fact that the total was almost $100 USD more than I expected is really his fault. Right?

Later that evening I met Hubby at his office to show off my purchases. He knew I had been shopping so there was nothing to do but to tell him the truth – gently. I started off with Mum’s textile gift, which Hubby promptly said we would be keeping for ourselves since it was so nice. (Sorry mum!) Then I modeled the necklace, which he declared to be yet another good purchase saying it looked lovely on me. I reached into my purse for his final surprise – the bill. There were surprisingly few rants or raves (Perhaps because we were in public?) and he said I had shopped well and he approved of all my purchases – no matter their cost. Isn’t he best!?

But the shopping wasn’t done yet! 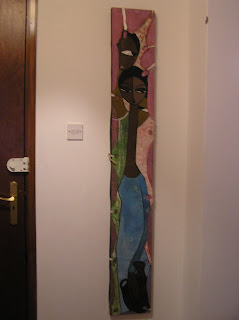 Saturday night I asked Ben and Shar if I could return to a small art gallery we had visited earlier in the week. Hubby, no doubt someone afraid of what I would do if left unsupervised, joined me in my perusal of the works of local artists. There, I showed Hubby a small painting I had fallen in love with during my last visit. He and Ben walked around the gallery and fell in love with a tall but lovely multi-media (leather on canvas) that I knew Shar liked.

Ben and Hubby declared that their choice was a must purchase and we debated how I would be able to bring it home on the plane. I was still gazing longingly at my little painting when Hubby decided to negotiate with me. I could get both paintings if I agreed to stop nagging him about going away somewhere for Easter. Could we still maybe do one night in a local hotel? Yes.

I had two words for him: Done deal!

But that wasn’t the end of our adventures. After waiting around for thirty or forty-five minutes for the paintings to be wrapped for traveling I went to pay for them. That’s when I was told that they didn’t accept credit cards. Uhoh. That’s not good news.

In an unprecedented move Ben and Hubby then hopped back in the car and hunted for an ATM for over thirty minutes in order to find the cash to pay for the paintings. I would have given up and chalked it up to fate but not these art lovers – they wanted their paintings and nothing as silly as a lack of close ATMs was going to stand in their way.

I carried both paintings on the plane (the small one, obviously, in my suitcase) much to the chagrin of the airline staff. Upon arrival back home, and after a few hours of debate with my other personalities, I decided on homes for each painting . So wearing my necklace and brandishing a hammer, I hung them up where I could appreciate them on a regular basis - in the living room.

The only downside to this trip, I think, is that Hubby is never ever going to let me visit Addis again. At least not until he has first divested me of all credit cards, ATM cards and cash. Little does he know that I’m more wily than he thinks when it comes to my first love – shopping!
Posted by MsTypo at 6:42 AM