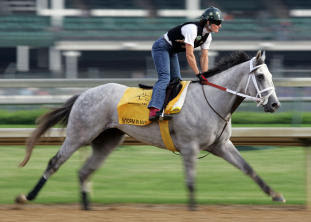 I don’t write often on this blog about my father. Don’t worry; it isn’t a bizarre conspiracy -- I just hadn’t gotten around to it yet. But this weekend marks one of the highlights of Dad’s annual calendar: the Kentucky Derby. My father has been attending this great racing event for as long as I can remember – he even has the commemorative glasses to prove it.

(And let me take this opportunity to say that I do not hate the Derby glasses and don’t remember saying that I i ever did. I think they’re a cool souvenir – especially since we have twenty plus years of them. Thank you.)

Wednesday night at 1:05 a.m. my phone whistled that I had received a text message. No, the world hadn’t ended and no one was sick, my father just wanted to advise me that he was on his way to Churchill Downs and wanted to know who to place my bet on. Now I know I don’t need to tell you that neither my sainted father nor I would ever bet on a sporting event…. Never mind, it didn’t sound plausible even to me.

Anyways, this morning I tuned into the Derby’s website to investigate the players and try to determine which one would be my first ever winning selection. I base my choices on science – who has the coolest name and the prettiest silks. It’s amazing I haven’t won yet.

My initial brain waves went toward Imawildandcrazyguy (with a name like that you simply can’t go wrong!), Nobiz like Shobiz (a great song that I am even now singing much to the annoyance of everyone within a five mile radius), and Zanjero because I keep imagining Antonio Banderas saying it in a really sexy way. “Zanjero!” But then I decided to do some actual research in order to determine who the winner would be. And, of course, by research I mean that I read the headlines on Yahoo.

Which brings us to my pick for winner of the 133rd Run for the Roses: Storm in May. Not to be confused with Stormello (whose jockey will be wearing a bizarre outfit that looks like something Blake from American Idol rejected as too plaid) Stormy is blind in his right eye. At 30:1 odds Storm in May is not the longest shot in the field and as his owner/trainer Bill Kaplan said, "He doesn't know he's handicapped. He thinks he can see perfectly."

Call me sentimental. Heck, you call me naïve but I really like this horse and his story. Good luck on Saturday, Stormy! I’ll be cheering for you!! And not just because I’ll have $5 riding on this victory.
Posted by MsTypo at 2:51 AM

As another of the Kentucky travellers has the same problem as bro, there were bets placed. Ah well. I'd say no-one won...including me.
merthyrmum