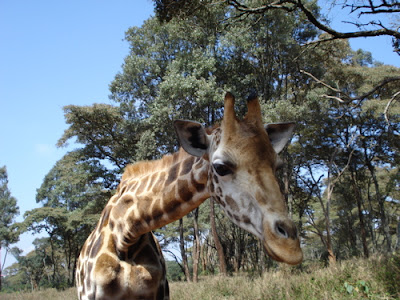 Last week, I headed out on another Association “Out and About” excursion. These monthly outings are usually an enjoyable way to discover something new and occasionally cool to do in Nairobi, while hanging out with a dozen other Association members. And last week’s trip was no exception.

After a 45-minute delay since everybody (other than me) was late, we headed off to our first stop – the Giraffe Sanctuary. Yes, I know, I’ve been there numerous times now, and blog about it almost every single time, but I really do enjoy it so much! The giraffes, especially our favourite Canadian giraffe, Gord, are always fun to visit, feed, and hang out with.

This trip was different for two reasons, however. The first was that we had an actual guide so we were able to learn quite a bit about the history and future of the Centre and its snuggly giraffes. The guide was incredibly knowledgeable and seemed to derive great pleasure from making some of the women kiss the giraffes. (I did not participate in any of these make-out sessions, thank you.) 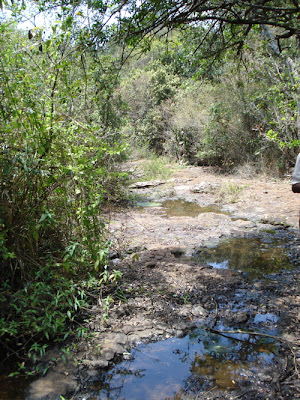 Our next stop was right across the street from the car park where our guide took us on a several mile nature walk through some of the Centre’s grounds. The extended grounds are home to Jock, the oldest of the giraffes, who has a slight tendency to kick the baby giraffes out of jealousy. He’s a lucky guy though, since the Centre’s handlers bring him a woman to hang out with every night. (Giraffe Centre = Pimps?)

The nature walk was a lot of fun even if the other women were taking bets on when I would collapse from exhaustion, a heart attack, or a combination of the two. Although we didn’t get to see Jock the Bully, we were able to see some fabulous views of Nairobi and the Ngong Hills. (Ngong is the Swahili word for knuckle, which is what the hills look like from a distance.) 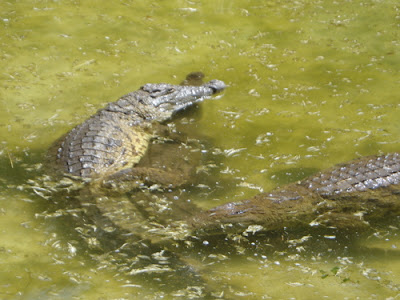 Our next stop was to Mamba Village for lunch. The Village isn’t far from the Giraffe Centre and was surprisingly nice. Before I get too far, I should start with another Swahili lesson and hint as to what we were doing at this relatively unknown Karen oasis. Mamba, you see, is Swahili for crocodile!

As some of you may know, I have been to crocodile parks in the past and *not* enjoyed the rather odiferous experience. My first impression of Mamba Village, however, was that the entire place was picturesque and decidedly not smelly. Our lunch, I’m sad to report, was not very good although the setting and company more than made up for its deficiencies. Our table was set next to a man-made lake, which was designed in the shape of Africa. They had even marked off where various countries would be located. (We were sitting near Sudan, I think!)

After lunch, we bought tickets (around 100 shillings, I believe) to see the crocs themselves. Unsurprisingly since I was there, two of them were having sex. (I do seem to have that effect on reptiles!) We were told that any eggs laid at Mamba Village were taken south to Mombassa where they were farmed for various purposes including leather and food.

In addition to the reptilian residents, Mamba Village also boasted several shops, a children’s playground that would meet with screams of terror from most safety experts back in the Real World, and a small flock of ostriches. In keeping with the theme of the day, we were permitted to feed the giant birds large kale leaves. Personally, I wanted to take one home, butcher it, and have it for dinner – but I was told that wasn’t an option. Dang it!

Overall, the ladies and I had a lovely day driving around Karen and seeing the local tourist-friendly animals. Best of all, I was able to fit in a small workout (and sunburn), learn a few new things, and make a new friend or two. Ok, one of the friends was a giraffe, one was a warthog, and the other was a crocodile that kept smiling at me. But hey, they were all really nice and I think I’ll visit most of them again soon!
Posted by MsTypo at 4:33 PM