The Sound of “Bobble Head" 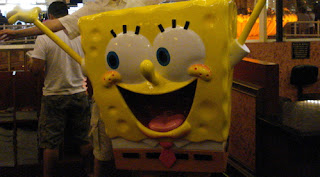 Let me start by saying that Hubby and I had a really enjoyable home leave. Let me also say that it was exhausting. From the time we arrived to the moment we returned to Nairobi, we took 17 flights, slept overnight in at least ten cities and three countries, and basically didn’t stop moving the entire time. That’s why we enjoyed our “us” portion of the trip so much!

Our “us” trip included three days in Las Vegas and five driving around Southern California. What made this part of the trip so lovely is that we did what we wanted when we wanted to: there was no schedule to keep. Well, almost no schedule…

After much researching, I decided that we would be staying at the Venetian. This seemed like a good idea as the rooms looked large, it was within walking distance to the bookstore, Mario’s B&B was located there, and we had already stayed at the Bellagio which was considered the other “best hotel” in town. For the same money, the Bellagio is a much better hotel with nicer rooms, better amenities, and far better service. Bellagio is also more centrally located on the Strip – a fact that we would be reminded of frequently when wandering the steamy, 40+ºC streets. I’m pretty sure that hell feels a lot like Vegas in July.

The deficiencies of the Venetian aside, we did win a bit of money there – even if it was by mistake. Allow me to elaborate. Our game is roulette as it is entirely all chance and there are few skills needed in order to win money. Put your chips on the number, on the half number, on the four corners, or you can pick a colour… Well, you get the idea. Hubby and I have a system that usually keeps us in the black (unless I’m trying to cheer him up) and means that we still have lots of fun.

One of the more interesting aspects of sitting at any table in Vegas is watching people bet. “One hundred on red,” only to watch the wheel hit 00. Hubby and I would be in tears, but these people just keep on betting like chips grew on trees. Our first rule is that we only go to $5 tables, which means that we get $1 chips and can play a minimum of five chips at a time. This let’s us maximize our fun, time at the table, and our money.

Back to the Venetian… After having won quite a bit of money across the street at Treasure Island (or TI as it likes to be called), I insisted that we tempt the gods and play one last table. Unfortunately, at a place like the Venetian, $5 tables are not exactly easy to come by. We finally found an electronic game of roulette where there is a real person in the middle of a circle of computerized betting seats. It wasn’t our cup of tea but we waited patiently for our turn.

Our first game we pressed the screen to indicate where we wanted to put our chips and discovered that the touch screens were VERY sensitive. Luckily, we managed to move our chips where we wanted them before the “No more bets” voice came over the speaker. We lost that round. The next round Hubby decided to get in on the game and started to press the screen seemingly at random. He had accidentally put money on number 14 rather than the corner and our time to move the chip was running out. He tried desperately to move the chip to the side and ended up playing a second chip instead. “No more bets.”

I chastised him for putting money on 14 in the first place as it had already come up two numbers prior. Then the wheel stopped and I strained to see where the little silver ball had fallen. I looked up at the screen displaying the winning numbers. Hubby had won – it was 14. We left the table that instant with $71 dollars in chips in our hands. I still have one of the $1 chips in my purse for luck – and to remind myself that sometimes accidents happen for a reason.

This installment of the blog is becoming rather lengthy and I still haven’t talked about Harry Potter and the room of requirement, K-Fu and California, or reliving Ryan’s odyssey in the OC. Perhaps tomorrow I’ll start to share those stories. In the meantime, I’ll fill you in on the photo at the top of the page – Hubby is standing next to Sponge Bob. And was sober. ‘Nuff said.

PS. I almost forgot to explain today’s title/Zen Koan. Hubby believes that the sound which exists even in your dreams after a few days in Las Vegas is what bobble heading would sound like. Close your eyes and listen to the sound of hundreds of slot machines singing, ringing, and winning. Now picture someone bobbling their head. It may not be the sound of one hand clapping, which a taxi driver did describe to great hilarity, but it isn’t bad.
Posted by MsTypo at 7:04 AM