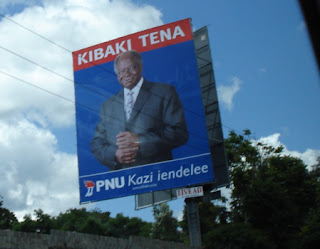 As you may have heard, the Kenyan parliament was dissolved on October 22nd. Since the laws here wisely state that the electioneering season should only last sixty days, the government had just a few days to call elections and still ensure that they fell within the 2007 calendar year. The subsequent announcement that the elections would take place on December 27th was expected but still a relief for many who are waiting to participate in what is sure to be an exciting election.

As in any country, the first sign of the upcoming elections are, well, the signs. From small fliers stuck to any available surface, to huge billboards posted throughout the city, images of those appearing on the ballot are everywhere. Their slogans range from reminders that voting in an incumbent is good – Kibaki Tena 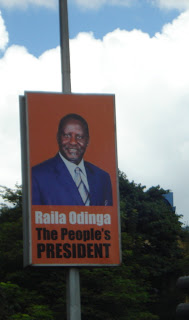 (Kibaki Again) – to promises of change from the opposition - being “Decisive and Dynamic.”

Lest anyone think that I am supporting one party in favor of another – I’m really not. I am simply enjoying being in the midst of a “young” nation exercising its democratic rights. The election season here is especially interesting given the excruciatingly long primary season going on back in the States. 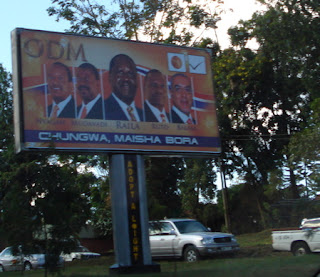 The one downside about observing the Kenyan elections is that we don’t get any local TV stations filling us in on daily election news. The newspapers, naturally, have quite a bit of information, but the power of moving images cannot be dismissed. Or, for that matter, the power of being on the periphery of it yourself. 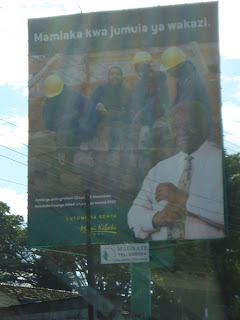 A few weeks ago, we witnessed what allegedly began as a political rally at a school near Hubby’s office. It ended in a riot that was broken up by teargas wielding police. I wish I had photos from that day, but I had forgotten my camera at home. Instead, I only have the memories of the scent of the teargas affecting those of us watching from the office almost a half-mile away from the actual site of the rally. 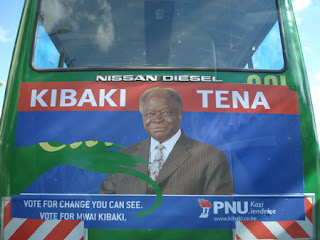 Today’s blog, however, isn’t about student protests or even campaign speeches being shouted out of bullhorns from matatus driving up and down the streets of Nairobi. Today’s blog is just an opportunity to show you some posters I photographed around town on billboards, light posts, and even the back of buses. Enjoy and don’t forget to vote!
Posted by MsTypo at 11:38 PM