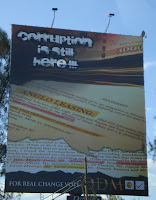 On the heels of this weekend’s vote in Australia, I have some more photos of Kenyan campaign posters from around Nairobi. As always, the posters were everywhere – huge billboards on main thoroughfares; small posters stuck on any available wall, light post, or fence; and even the sides of cars.

As I drove around town on Friday and Saturday, it was interesting to note that PNU

(the party currently in power) didn’t seem to have many billboards up at the moment. Indeed, with the exception of the “Kibaki Tena” poster I showed you last time, every billboard I saw was for the ODM party. I’m sure that this observation will be temporary and cyclical as the parties put up new posters and try to get different voters on their side. 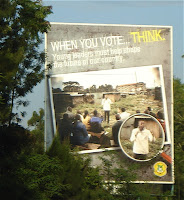 At the roundabout near ABC Centre is a billboard advising voters to vote wisely. I’m not entirely sure which party or organization has paid for this advertisement but it is one that I hope the voters see and remember. As with politics in any country, people here vote along family, tribal, and party lines often without consideration as to who or what they are voting for. As I mentioned, this is not a uniquely Kenyan problem although the various groups do seem to exploit this to their best advantage.

In addition to the federal elections, people will also vote in local polls for their MP’s. Campaigning in this area seems, at this juncture, to depend upon the candidate’s war chest – those with more money have large billboards, while those with a more modest purse make do with smaller posters stuck around their jurisdiction and campaign teams
shouting slogans from matatus. (I’ll try to get some photos of these teams for next time.)

With the date for the elections drawing nearer, the political climate in Nairobi is sure to change, with popular opinion swinging from one side to the other depending on with whom you speak. As December 27th gets ever closer, the tactics around town will change, the campaign teams will become more aggressive, and the posters will hopefully become even more interesting and plentiful. At least that’s what this photographer/blogger hopes!
Posted by MsTypo at 5:36 AM