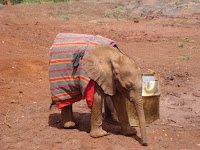 One of the most popular stops on any trip to Nairobi is the Elephant Orphanage. For one hour every day the Orphanage is open to visitors who are given the opportunity to see the elephants up close and maybe even learn something about these incredibly interesting and oddly human-like creatures. Run by the David Sheldrick Wildlife Trust and located on the grounds of Nairobi National Park, the Orphanage is more than a tourist attraction – it is a living lesson in conservation. I was lucky enough to visit twice this month: first with Kimmy, and then just last week with Hubby, BBS, and Eleanor.

Last month, I was fortunate enough to be in attendance when the woman behind this amazing project, Dr. Dame Daphne Sheldrick, spoke at an Association meeting. During her too brief talk she shared stories about individual animals, 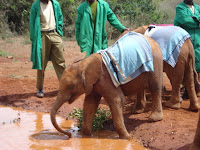 elephant ESP, and even the truth behind the phrase “memory like an elephant.” Dr. Sheldrick is an effective speaker who really believes in the Trust and the work it does of saving elephants (and rhinos) that might have otherwise died and then raising them to be full members of wild herds without any dependence upon their human caretakers.

Technically the Orphanage is free to visit but boxes have been placed near the entrance for people to make donations of what is hoped will be at least 300 Ksh per person. Since the Trust is run almost entirely on donations every little bit helps.

One of their other sources of fundraising is the Adoption Program which allows you to “adopt’ an elephant for one year. For a relatively small sum, adoptive patents get monthly emails about “their” elephant, keeping them up to date on how they are growing 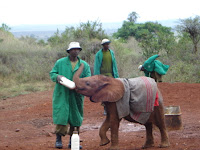 up, making friends, and developing. People who are physically in Nairobi even have the opportunity to return to the Orphanage in the evenings to assist/watch the elephant’s before bed snack.

The Nairobi Orphanage is currently home to nine elephants but the first to make their entrance are the five babies – the youngest of which is just a few months old. Compared to the big elephants one sees while on safari these babies are tiny. Most of the pachyderms have tragic stories – one was discovered after it fell down a well, another was found by locals who inadvertently hurt it in an attempt to mark it as their own.

The blankets you see on the youngsters are tied on to help keep them warm since we have had some surprisingly chilly mornings of late. Hypothermia and pneumonia, we were told, are both common killers of young elephants so this minor human intervention helps sustain their lives while their skin grows thick enough to keep them warm in any weather. 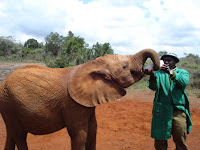 The next batch out escorted by their human handlers, was slightly older – these would soon be making their way from Nairobi to Tsavo for the next phase of their lives. The day I visited with BBS and Eleanor the older “kids” spent much of their time playing in muddy water and kicking the soccer ball around. The gentleman who was telling us about each of the elephants explained that soccer was one of the elephant’s favourite past times. Beckham better watch his back – these surprisingly nimble animals seem to be in training for the next World Cup.

Some of the elephants pictured may look familiar for fans of the BBC series Elephant Diaries, as the focus of that documentary was the Sheldrick Trust’s animals. The sequel, Elephant Diaries Two, will be premiering in the UK next month. So even if you can’t find your way to Nairobi to visit us, you can at least get to know Shimba, Emily, Dida, and all their friends on your television set every week. Which is almost the same… kinda...
Posted by MsTypo at 1:31 PM