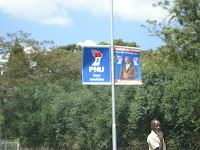 I hope you’re ready for your weekly dose of Kenyan election posters. This time around I was aiming for some posters I hadn’t shared with you yet. Unfortunately that means that there are not a lot of PNU ones today as they seem to have decided that the only poster they want to create is the classic “Kibaki Tena” you’ve already seen. And since his billboards are larger than life, so has everyone else in Nairobi. 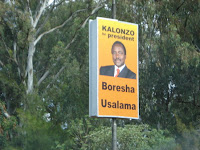 We do, however, have a new candidate in the mix with Kalonzo signs making his first appearance here. This candidate is putting himself forth as the alternative to the mainstream parties. Much like ODM, Kalonzo’s ODM-K party also emphasizes that they will not tolerate corruption, which they maintain is still rampant within the PNU party. 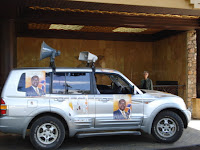 As promised last week, I have taken a few pictures of our local campaign buses. These are often matatus with posters stuck to them and bullhorns affixed atop so that they can “share the message” as they drive around town. Although not pictured here, there are also numerous pick-up trucks around town with their beds filled with teens shouting support for their candidate of choice. The locals that I have spoken with often say that these kids are often troublemakers for all that they are encouraging people to “get the vote out.” 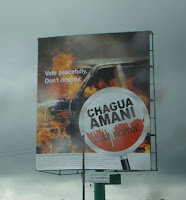 Which brings us to the latest in “vote peacefully” billboards. I took this picture on my way to Karen and it encourages people to “chagua amani,” literally asking them to “choose peace.” Everyone I have spoken with has told me that elections here are not violent but that “the constant reminders can’t hurt.” After quite a bit of zooming, this poster was brought to us by numerous organizations in Kenya including the Partnership for Peace, Hindu Council of Kenya, National Council of Churches of Kenya, among others whose names I was unable to read clearly. 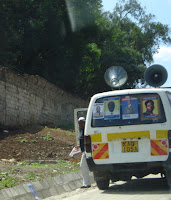 Our final campaign issue today will be the parties. I realized last week that I hadn’t told you what any of the party names meant so I am going to try to make that up somewhat belatedly and very simplistically. First off we have Kibaki’s party - PNU, or the Party of National Unity, which is actually a party made up of a lot of other parties that wanted a seat at the table. Next up is Raila Odinga’s party – ODM, or the Orange Democratic Movement. And finally, for the purpose of today’s blog, we have Kalonzo’s ODM-Kenya but I'm not entirely clear on how they are different from their ODM namesakes.

I’m sure that, as usual, a number of my facts are wrong, and for that I apologize. The campaign season here is becoming incredibly interesting and I’m really pleased to be here during such a dynamic time. People are divided about whom they want to see in power. Some talk about who will do the most good. Many seem to talk about who will do the least badly for the country. Either way, the next few weeks should be exciting.
Posted by MsTypo at 3:39 AM

At least the weather looks good for voting--we have mucho snow and a broken new snowblower. Ugh:(