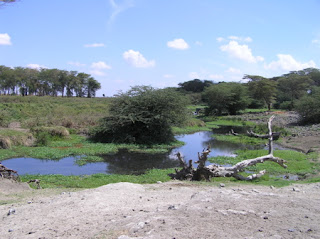 Two incidents marred our trip to Amboselli and left us feeling a little uncomfortable and more than slightly awkward. The first involved Leonard the Masai and the second, oddly enough, involved chocolate cake.

Since there is so much downtime between drives, the lodge tries to keep people busy with activities like nature walks and “cultural explorations.” The latter was an opportunity to learn about the Masai from a Masai employee of the Serena. It would, we were told, start with an informative talk and finish up with a dance performed by several people from a local village. We were also told about a popular outing to a Masai village which included going into people’s homes but we felt that option was too intrusive into people’s lives. We didn’t want to be the ugly wazungu.

At two o’clock, we met Leonard and introduced ourselves. Since my name was difficult to pronounce and remember Leonard started calling me, “My future wife.” This became rather amusing as he kept asking BBS how many cows I was worth. 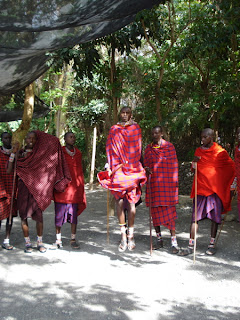 After dismissing all of my questions about the book “White Masai” by calling the book “ridiculous,” Leonard went on to discuss everything from his dislike of German and French women to the incidence of HIV within the Masai people. In telling us about the diet of traditional Masai, Leonard observed that since his people were traditionally nomads their staples included “milk, meat, and blood.” Eleanor and I later discussed this last tidbit as being rather dubious but said nothing of our doubts to Leonard. 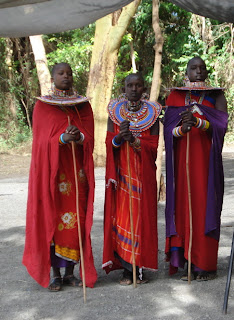 A discussion about both male and female circumcision was a prelude to what would be the most uncomfortable ten minutes of the entire afternoon. The three women and ten men who entered the clearing to dance for us were all dressed in traditional Masai clothing. The dance, which seemed mostly to be a contest of which man could jump highest went on for several minutes and was, at first, fascinating to watch. The chanting that accompanied the display was quite interesting but the whole thing went on too long and the look in some of dancer’s eyes made us feel like the ugly wazungu we had hoped to avoid becoming.

After the dance, beaded necklaces were put around our necks for a series of photos that only added to the voyeuristic nature of the entire debacle. Masai people do not normally like being photographed and here they were putting themselves forward for our “amusement.”

The incredible discomfort we felt with the Masai dancers was only equaled on our final evening. As I mentioned previously, all of the meals were essentially buffet style with waiters bringing us our mains at dinner and drinks during all meals. A point of amusement among the three of us had been the fact that although we were always one of the first tables to seat themselves we were also the last to leave since people kept forgetting to bring us the cheque for our drinks each evening.

We were always polite to the staff of the lodge and I practiced my Swahili when I could. While we were never rude or impolite, we didn’t go out of our way to break the “nice” barrier either. (Don’t worry, this entire preamble will make sense in a second.)

Our final night we had a nice meal and decided to ask for the cheque at the same time as Eleanor’s nightly cup of tea in hopes that it might ensure it came more quickly. While her ginger tea arrived fairly quickly, the cheque, unsurprisingly, did not. Our young waiter kept saying it was coming before disappearing back into the kitchen.

All of a sudden the kitchen doors swung open, with several waiters banging pots and a guitar player and a chef bearing a cake emerging from the kitchen. Singing a song I vaguely recognized from other tourist events, they made their way up the main alley of the dining room while everyone clapped along and smiled.

I spotted a few kids peeping from around a corner and realized that it must be one of their birthday’s – indeed the conga line turned in their direction. When it turned again we continued to clap and smile looking around to see who else could be the intended target. As if in slow motion the line passed the table behind us and stopped at ours. 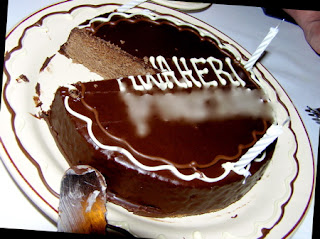 As if the conga line weren’t bad enough, they continued to sing as BBS, Eleanor, and I all stared at each other in humiliated terror. Hoping for the best, I took the knife that was offered to me and cut a slice of cake, which thankfully stopped the singing. The headwaiter explained to us that the cake was a gift from the staff for our kindness during our stay.

After he left we stared accusingly at one another each blaming the other for the embarrassing cake, which sat before us. Then we turned on loved ones who weren’t with us including my mother and husband. I defended the latter knowing he valued his life too much to do such a thing and BBS pointed out that our mother didn’t actually know where we were.

So there you have the tale of two very different yet still discomforting events. One left us feeling like voyeurs participating in a very private ritual in which we had no rightful place. The other left us the very confused owners of a lovely chocolate cake. Make of these takes what you will but if you know who sent the cake PLEASE tell me!
Posted by MsTypo at 2:14 AM

IndianTravelForum.com, An indian travel forum with details about different destinations of india. The forum has got information and discussions regarding tour and travel packages, hotels, resorts, tourism news and happenings in india tourism.
India Travel Forum