A Picture of Harmony 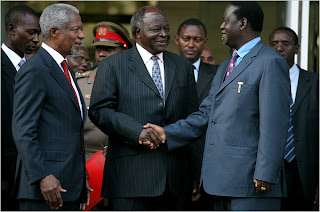 This photo of Kofi Annan, Raila Odinga, and Mwai Kibaki might have you thinking that Kenya is well on its way to reconciliation and having a peaceful and working government. Pictures may be worth a thousand words but in this case they can also be slightly deceptive.

Thursday marked the first time that the two stars of this tragedy have met in person since the election. And while the meeting itself reportedly went well, the fireworks started afterward with an initial salvo from Kibaki who pointed out that he was “the duly elected president” and insisted that any reconciliation would be on his terms: “I will personally lead our country in promoting tolerance, peace and harmony.”

Never ones to let such a comment go unopposed, ODM leaders shot back: “True to his fraudulent character, Mr. Mwai Kibaki abused the occasion by attempting to legitimize his usurpation of the presidency.” All I have to say is that Mr. Annan has my sympathies in dealing with these two and their quarrelsome entourages.

On an interesting (to me, anyways) and semi-related note, I attended my book club that same day where we discussed “Imperium” by Robert Harris. The morning started out with everyone catching up and finding out about people’s holidays and lives since the elections. As secretary, it was my job to take everyone’s minds off politics and get them talking about “Imperium,” which is about ancient Rome and the famous advocate Cicero. (The book concludes just before he becomes Consul.)

It didn’t take long for Harris’s story of power and corruption to become an allegory for the current situation in Kenya. After everyone had their turn discussing why they liked (or didn’t like) the book, we returned once again to talk about how various similar situations described in the book could be found in present day Kenya – everything from “tribal voting” to class warfare.

"It is the peculiar quality of a fool to perceive the faults of others and to forget his own."

"Orators are most vehement when their cause is weak."