A Return to the Everyday 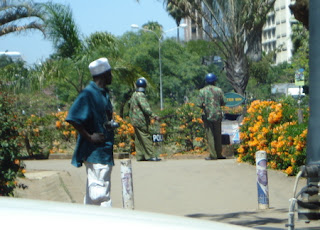 Rock and Tori arrived at the house yesterday for the first time since before Christmas. The good news was that both they and their families were ok and that they managed to stay out of the worst of the violence. They were both appreciative and surprised that we had been so worried about them and had urged them to stay home last week rather than coming into work. Several of their friends, they explained, had been asked by their employers to make the trip into work by expats who felt they couldn’t live without their cooks, maids, or drivers.

Tori told me stories of being locked inside her home while women were raped and the small dukas near her house were looted. Her teenage son was in the house with her, terrified by what he saw and unable to understand what was happening among his usually peaceful neighbors.

Rock explained that just about everyone his neighborhood left during the worst of the riots, taking what belongings they could carry. He and his son were the only two who stayed. When his neighbors came back, they asked how Rock had been able to sleep knowing what was going on. He explained that he “had faith in God” to keep him safe. Later in the week, the police arrived to patrol his area and “keep the peace.” He and a few other neighbors joined the patrols and saw firsthand the results of the people who had taken advantage of the situation and looted homes and businesses in his community.

A quick drive down State House Road on Monday was proof that the Government is not entirely sure of the current air of peacefulness in the city. Armed policemen were situated in strategic spots around the area, ready to cut off access if need be. Armed guards were also still blocking entrances to Uhuru Park. None of these armed militiamen, it should be noted, seemed very worried as most of the ones we saw were napping, chitchatting with friends, or reading.

Downtown Nairobi was still incredibly busy with the usual traffic jams, jaywalkers, and insanity everywhere. The lack of matatus, we were told, was due to the fact that many of them are owned by Kikuyu and their owners are afraid that hooligans would target their vehicles.

Later today, I will be heading out to meet with various people with a goal of raising money within the expat community to aid the people most affected by recent events. If Rock can share what little food he has with neighbors whose homes have been looted and destroyed then surely the rich middle class can afford to contribute to help rebuild those homes.
Posted by MsTypo at 12:24 AM

oh my gosh....I can feel it. Typo is becomming a dogooder!!! Mary

Good for you--raise the money but find a dependable agency to distribute the money and/or food/building supplies. Perhaps Rock and Tori can help suggest appropriate supplies etc. I'll try to get the other info for you soon.
Be Safe and Take Care,
merthyrmum