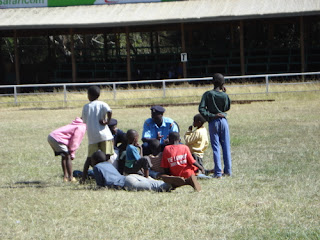 The time I spent yesterday at Jamhuri Park was amazingly moving in ways I find difficult to explain. I saw children playing with police officers and enjoying the fact that they weren’t in school. And I heard stories of people being beaten with pangas, and others who escaped being set on fire. There were also dozens of volunteers and even more arriving as we left – people, like me, who felt that they just needed to go out there and do something – anything - to help.

During our brief trip to the Jamhuri “kitchens,” we saw women trimming the green beans that would make up that day’s lunch and spoke with volunteers who told us that many people were simply dropping by with donations of everything from food to cooking 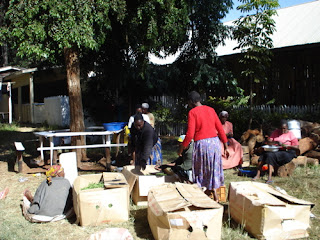 equipment. “We started with four knives and now suddenly we have many more.” They explained that the meals were simple by necessity and that requests for buttered bread would have to be ignored unless armies of volunteers started arriving at 6:30 a.m.


We had unfortunately arrived too late to help distribute breakfast although we were able to witness the tail end of the incredibly long lines of people queuing for bread and tea. Children were always fed first and then the adults came in separate groups. Peter, an elderly man we spoke with, complained that not everyone was receiving equal 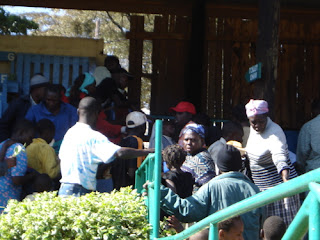 amounts of food. “I get three pieces of bread and the man behind me gets five. This is not fair.”

Peter also told us how people snuck into Jamhuri from Kibera to obtain food that they would later resell within the slum. These people who were taking the food meant for the displaced people, he said, were the same rioters and looters that had forced him out of his home in the first place. Spice explained to me that Kibera, which I had only ever seen from Langata Road, backed onto Jamhuri and could be accessed directly behind the arena where we were standing. 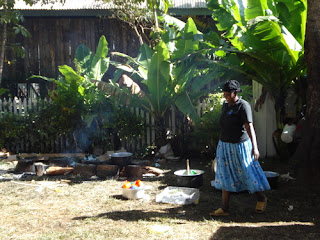 Peter went on to say that despite having his name on the official list (which Spice herself had helped draft on Saturday) he had not yet received a blanket. This is a complaint we would hear more than once during our time there. When we shared our findings with the organizers, they told us of a snafu the day before when a local charity distributed blankets during the night without consulting anyone in charge. Moreover, they pointed out, there were not yet enough blankets for everyone who was on the list. 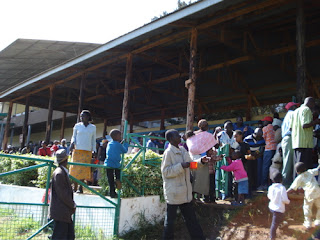 Two women who had been following us since shortly after we arrived finally approached Spice and I to ask us for money so that they could return home to Kisumu. They didn’t want to remain in Jamhuri Park, they told us, but did not have any means to return to their families up-country. I had not brought a wallet with me so I didn’t have the 1,000 Ksh per person that they said would pay for their matatu ride.

Returning home is the ultimate goal of both the refugees and the volunteers. The problem is that many people simply don’t have a home to return to or are afraid of further ethnically driven violence. On the other hand, the organizers are afraid that people will become too comfortable with the meals and “comforts” being provided and will refuse to leave. 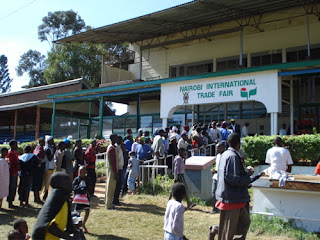 Either way, the question is how long these displaced people will have to stay and how long the donations, volunteers, and goodwill will last. Many people in Jamhuri believe that in a few weeks (or sooner), the world will forget about them and the food will run out along with the volunteers distributing it. It is up to people like us and organizations like the Association to continue to monitor the situation so that the current humanitarian crisis in Kenya does not worsen or become a forgotten line in yesterday’s news.
Posted by MsTypo at 12:54 AM

thank you so much for sharing your experiences and those of others, wrongly displaced for the rest of the world to listen, hear and hopefully act. i believe that traveling is such a wonderful way to learn about oneself and the rest of the world. i havent had a chance to fully browse through your blog entries, however, i must admit while living in kenya i always was curious about the lives of those who who chose to make kenya their homes, what are their lives like, experiences etc. if you like you can reach me via email
nehandadreams@yahoo.com
aburstoflight.wordpress.com

peace to you and yours.

Hope all is still well. Good planning re your latest projects. The latest blogs on the conditions in Nairobi are great.
merthyrmum