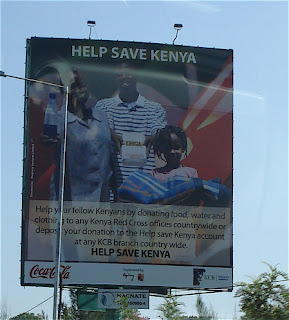 I saw the billboard in today’s photo on my way to do some Association work with a friend. Rock felt that the ad was a good idea but that he hadn’t seen any others in town. Nor had he heard much about this effort from other people. Most of his comments about my taking this photo involved him repeating the tag line in a rather depressed tone, “Help save Kenya.”

On Sunday, our guard, Askari, told Hubby that things in Kibera hadn’t improved but that everyone had simply become “used to” the situation. Indeed while, Rock, Tori, and Askari are working on daily survival in a drastically changed Kenya, some members of the expat community are firmly focused on where they always have been – on themselves.

I spent several hours today at the Village Market (aka the alternative universe on the other side of Uhuru Highway), and was able to overhear various people complain about the rising costs of food stuffs at Nakumatt, having to cancel safaris due to the current “crisis,” and perhaps my favourite, that they hadn’t received the latest copy of their favourite magazine because the current situation had interrupted their mail service.

As today is “Super Tuesday” back in the States, one gentleman was prompted to chuckle that if Obama became president we had the possibility of having two Luo’s as heads of State. His friend, on the other hand, pointed out that since Kibaki was still President, it could end diplomatic relations between the two countries forever. (I shan’t be commenting here about a conversation I overheard between two embassy employees who were pleased about being in Kenya during the crisis, as it would look good on their resumes. No, I won’t be mentioning that here because it would involve too many expletives and far too much anger at some people’s selfishness.)

The moral of today’s outing is that one should never underestimate the average expat’s ability to make absolutely everything about them. I wasn’t born cynical – this place made me that way!

EDIT: Hubby just made the point that I could be mistaken for one of these whiney, self-centered brats. I would like to point out that while I may be venting here and there, I’m cuter than the rest of these gits!
Posted by MsTypo at 1:15 PM