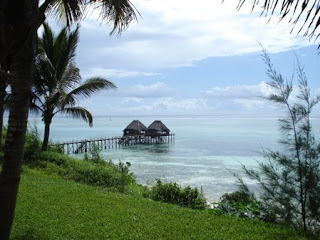 We have been watching the MTV show “X-Effect” for the last little while and are somewhat disgusted by it, yet completely incapable of looking away. The entire premise behind this show is that two people who once dated – and are now seeing other people – secretly wish they were still together. So MTV gives them just that chance!

The two couples go to a swank hotel and before they can even get to their rooms they receive a mysterious message asking the new half of the relationship to go to the front desk. (Nothing suspicious there!) With the couples separated from their new SO’s, MTV then throws the exes together in a sweet suite and treats them to everything from massage lessons to romantic meals. The twist is that their new SO’s are watching – after all, the whole thing isn’t set up at all despite the fact that there are cameras following the couple everywhere. Just like real life!

The whole show is set in a “romantic hotel” called Casa Bella. Which brings us to how this show relates to Zanzibar. We kept joking to one another that if a note turned up asking one of us to “go to the front desk for a message” that it would be a bad sign.

(Yes, that entire story was much ado of nothing and amusing to no one but us but I wanted to share it anyways because I love all my Devoted Readers so much! Or something.) 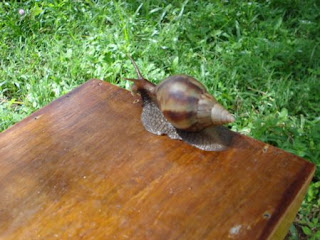 One of the really weird things about the hotel was the number of snails that were wandering about everywhere. And not small ones either! That said, they were kind of cute. I quickly decided; however, not to order the escargot if I saw it on the menu. *shudder* 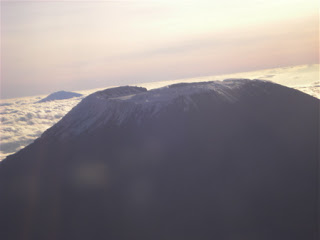 This is a photo of the top of Mount Kilimanjaro. No, we didn’t climb Kilimanjaro, we flew by it – which is almost as cool (if somewhat lamer). The pilot on our return voyage to Nairobi very kindly pointed out the famous landmark and flew by it very slowly. Hubby and I were quite fortunate that it was on our side of the plane as we certainly weren’t the only ones grabbing our cameras to take photos from 20,000 feet. The mountain looked close enough to touch!

Our original flight on Kenyan Airways was shockingly cancelled which meant that we flew Precision Air both to and from Nairobi. Kudos to this airline as their small planes appeared well maintained, their crews were incredibly courteous and efficient, and they didn’t lose our luggage. Heck, both flights were even on time!
Posted by MsTypo at 4:42 AM

I love escargot...but after that picture I am not to sure. Darn you!! M