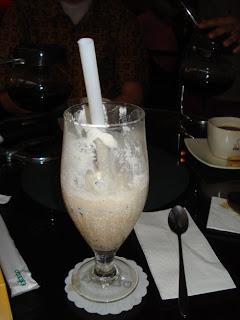 From the little bit I’ve seen of it, life in Jakarta would be terribly difficult – delivery McDonalds, malls filled with nothing but cafes and free Internet, and wine bars with incredible food and even better vintages. Don’t get me wrong -- I’m well aware that this is not how most Indonesians spend the their days but for an expat wife on vacation it wasn’t a bad first day.

Hubby, as you may know, is in Jakarta completing his final business trip for the Organization. And since leaving me behind in Nairobi wasn’t an option (that I was willing to discuss), Hubby said I could tag along. Thanks to the Organization, which is too cheap to pay for a hotel when something free is around, we are currently staying in the home of one of Hubby’s colleagues. For the most part, this is actually rather nice since we are living in a local neighbourhood and the home is tastefully decorated in traditional Indonesian style. On the downside, we are also situated uncomfortably close to a mosque and the morning call to prayer may soon be the morning call to the police if I can find the guy who “sings” the prayer off-key in apparent glee at waking up his “non-believing” neighbours. I realize that this is simply good 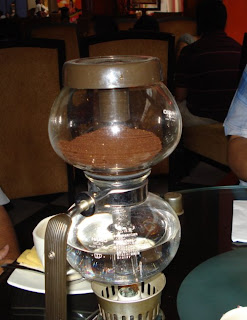 practice for living in Cairo but (and this may come as a shock to those of you who thought you knew me well) I’m not a morning person and being jarred from my slumber prior to the crack of dawn is not my idea of a good time.

But news from the Indonesian island of Java isn’t all bad – after spending less than 48 hours here, I am tempted to tell Hubby that he may happily apply for a job and move us here when our time in Cairo is done. Despite my continued status as every insect’s favourite three-course meal, I have rather enjoyed the dewy heat and remarkably friendly people we’ve met here.

This being the developing world, however, not everything works quite as well as one might hope. Case in point is the taxi we called yesterday at 11:15 a.m. to take us to meet Hubby’s colleague, Coola. We finally gave up on the taxi at 2:00 p.m. and decided that despite what the dispatcher kept promising, no car was going to show up 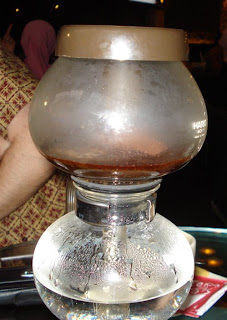 “in ten” minutes. Luckily, Coola was able to pick us up in his car to take us to one of the local malls, Citos, where we were amazed at the sheer number of cafes that one structure could support. 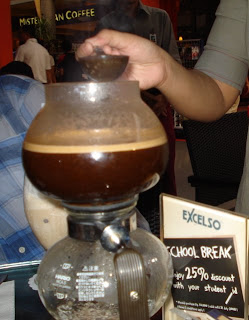 From our seat at Excelso, I counted no less than six cafes (including the one we were in) in my line of sight. And that didn’t even include the Starbucks I knew to be a few shops down the way. And it is here that today’s blog really begins.
Our local host, Coola, recommended that we enjoy a “siphon” coffee at his favourite café. As I’m not much of a coffee drinker, I optioned for a chocolate chip frapachino instead. Sadly, this meant that I could only be an observing bystander to the performance art portion of our meal. 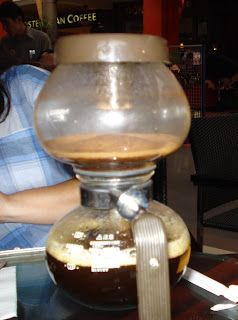 After an exhaustingly long wait, our drinks finally arrived. In front of Hubby and Coola were placed two Bunsen burners and a glass contraption with water in the lower bubble and coffee grinds in the top. When the flame below the water was finally set alight, all non-coffee conversation ceased as we immediately sensed that something cool was about to occur.

Slowly, the water began to boil and through the grace of magic (Coola’s words, not mine) the water and steam rose into the second bubble and began to make coffee. After 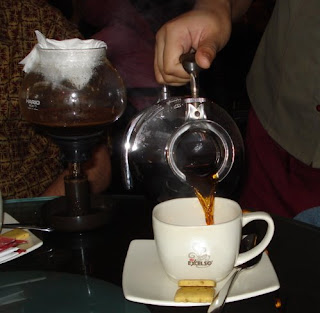 a few minutes we assumed the coffee was made when the top bubble filled with the dark elixir – but we were wrong. Suddenly, the coffee fell back into the bottom bubble. At this juncture, our waitress took the pieces of glass apart and poured Hubby his first cup of siphon-made coffee, which he declared to be quite lovely independent of the cool science show we had just witnessed.

By the way, my frappachino was good too. I even got a really big straw with which to drink said coffee beverage. The lesson here, my friends, is that sometimes you get to be part of drinkable performance art and sometimes you get the big straw. It’s up to you to decide which is better.
Posted by MsTypo at 11:15 PM

That looks like it might be the most amusing way to get coffee in the world....ever. I want some! (I would prooooooobably pick the big straw, too! :D)

Glad you're enjoying it, lady!

Well well well! Back comes the OLD coffee maker that MY parents used when I ws growing up> I think it was called a Kona machine.
Glad all continues to be well for you in Jakarta.
merthyrmum