Dedicated to the Muses 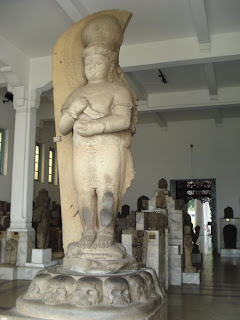 Although neither locale would be pleased to hear the comparison, Jakarta reminds me a lot of Delhi. Or at least what Delhi yearns to be – modern, clean, semi-efficient in that way that only developing countries seem to get away with. Even the ever-present graffiti seemed to the mold.

I attempted to walk down the tree lined street, bordered as it was with three lanes of traffic on the one lane road, but soon found myself confronted by that most un-Nairobi-like of obstacles – the heat. While it may be pleasantly “dewy” indoors, outside the sun bore down and left my skin slick with sweat. Not even pulling my hair into the world’s most unattractive bun helped slake the humidity from aura.

My goal yesterday was to visit the Museum Nasional, which I eventually arrived at 100,000 Rupiah poorer thanks to a taxi driver who decided to take me 12 km out of the 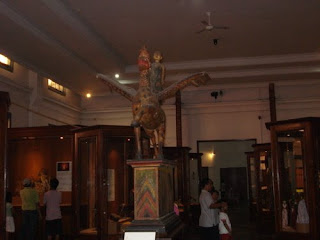 way before turning back around in the correct direction. (Evidently I agreed to this, although I can’t recall doing so.) Not knowing the way around is one of the key reasons I hate taking taxis – as soon as they pick up the scent of “tourist” they always take the scenic route!

Lonely Planet boasted that the National Museum in Jakarta is one of the finest in all of Southeast Asia. And if you speak or read Indonesian it may well be. Since I don’t, and I missed the English tour in the morning, I can say it’s a fine a museum. I’m just not quite certain what everything was.

The best exhibit by far was the room with all of the ceremonial weapons. Sadly, it was in a photography forbidden zone or I would have taken dozens of photos of the beautiful daggers, spears, and other assorted accoutrement. 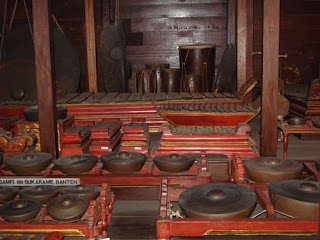 A Belgian woman I met (and spoke French with) urged me to see the beautiful (and also unphotographable) jewelry exhibit next door. I’m not sure what this says about me, but I greatly preferred the jeweled knives across the way to the frippery to be found amongst the golden rings and other such adornments.

On Hubby’s behalf, I took some note of the Batik exhibit. I found it interesting to see that for the most part, this ancient method of dying and printing fabric hasn’t changed much over the years. I even recognized a few of the print blocks from Hubby’s depressingly large collection of locally-made shirts. But then who am I to complain? In this museum even the puppets wore batik!

A great deal of space, in more than one gallery, was taken up with musical instruments of various shapes and sizes. From my mother’s school bells to elaborate xylophones (for lack of a better term), a love of music seemed to be an important message throughout the museum. One of my favourites was a series of hanging gongs that could be played almost like a series of base drums. 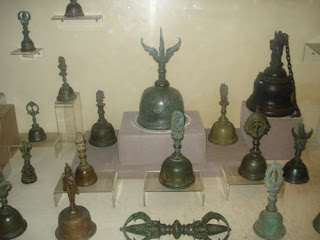 Even the weapons exhibit boasted its own instruments. What I had perceived at first glance to be a scabbard or perhaps even a ceremonial scroll holder (because you can never have too many of those), turned out to be a flute. Once apprised of its purpose, the six evenly spaced holes did seem a poor addition to a container meant to keep important military documents safe and dry.

More than anything else, even pottery jars, there seemed to be surplus of stone carvings of every shape and size. Most seemed to be religious in nature with random decorative pieces thrown into the mix here and there. Few, unfortunately, were labeled in any language, which made guessing their purpose and history a fun game. 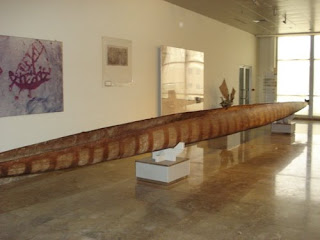 My favourite item, however, appeared to my Canadian sensibilities to be a canoe. Again, there was no signage that I could find whilst the guards were yelling at me and pointing at their watches – they were apparently annoyed that it was almost closing time and I was making them work.

Writing imagined histories is my favourite part of visiting any museum. I wonder what adventures were met in that boat. Was its great voyage to a nearby island to kidnap a local princess? Or perhaps a simple trading mission to obtain new musical instruments. Who knows?
Posted by MsTypo at 10:37 PM

Perhaps a visit to the ROM next week?
merthyrmum