A Little Soap and Water 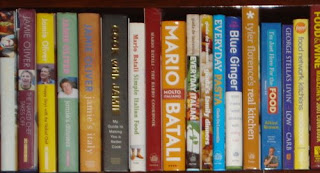 My obsession with the Food Network (and later BBC Food) has been documented and mocked numerous times over the past several years. Although I’m not a fan of the Anti-Christ (aka Emeril Lagasse), I do worship at the altar of Mario Batali, Jamie Oliver, and Alton Brown. When Hubby goes back to the States later this month, he will be purchasing the latest offering from Giada Delaurentis which will join the bookstore’s worth of cookbooks I have solely written by Food Network stars. (Please note that I do have scores of non-FN cookbooks; while wonderful, they are not the focus of today’s rant.)

The one thing that has always bothered both Hubby and I about the majority of these shows is the lack of hygiene they portray. While these shows help educate their viewers on how to create the perfect pear and almond tart, issues like food safety and buzz words like cross contamination do not seem to be on their radar. It sincerely disturbs me to see professional chefs touch chicken and then move on to chopping the next vegetable without changing the cutting board or washing their hands.

Some shows do pretend to care but very rarely are the food stars seen doing anything more than wiping their hands on a tea towel or even mentioning the dangers of things like raw chicken. Michael Smith, star of Chef at Home, is one of the few that is always filmed washing his hands with hot water and soap after handling raw meat.

Hubby and I discuss this issue almost every time we watch a cooking show so it was with great pleasure that I spotted a link to this article the other day. After all of the salmonella outbreaks in the US over the past few summers, food safety should be a priority not only for foodies but also the people that fuel their food fantasies.

The results were not good.

The survey found 118 positive food-safety measures and 460 poor food handling incidents, including not washing fruits, vegetables and herbs properly and a lack of hand washing in general.

Positive categories included hand washing, cleaning equipment, washing fruits and vegetables, adequate refrigeration, use of a thermometer or other positives.

Negative behaviors include food from unsafe sources, failure to use a thermometer, use of food from the floor, failure to refrigerate perishables, failure to wash fruits or vegetables, inadequately washing equipment, sampling food or licking fingers, cross-contamination of ready-to-eat or raw foods, touching the face and failing to wash hands.

(Since moving abroad we have been lucky enough to watch BBC Food, which boasts a new universe of cooking stars for me to worship and not a single one of them ever says the word, “Bam!”)
Posted by MsTypo at 4:03 AM

Good point... and after 20 years in the food biz (so to speak) the one thing that still annoys us is the "oh I got food poisoning from xyz restaurant last night!" "Must have been the lobster/prawns/foie gras/truffles...etc".

I'm hearin' ya.. and I am looking forward to a dinner party invite...with all those books, you must be a wizz in the kitchen!

I love cookbooks! I agree about the safe food handling. I am not insane about sterilizing my kitchen, but I am always washing my hands while cooking, and believe in owning multiple knives, cutting boards, etc.... use one, wash it with soap OR toss it in the dishwasher and grab another. Extra clean-up is better than food poisoning.

I absolutely agree and, as you know, your father is paranoid re the cleaning of implements after handling chicken.
And how about all the listeriosis in Canada?
Anyway: did you see the awesome recipe for Paella today in the local paper that only I read?
merthyrmum

My Marito told me that the Hygiene Dept in hospitality here is mostly only interested stickers with dates on food, while there is so much more that needs to be taken care of in the kitchen. Doesn't matter how dirty the equipment is, as long as there are stickers - no worries.
Cutting boards made of glass are I think the best. There should be one for meat, veg and bread. I usually desinfect the plastic ones with vineger. Kills germs and gets rid of the flavour. Strangely enough, having lived in Egypt I haven't really had much food poisoning. And I eat streetfood all the time.