NFL and other Nightmares 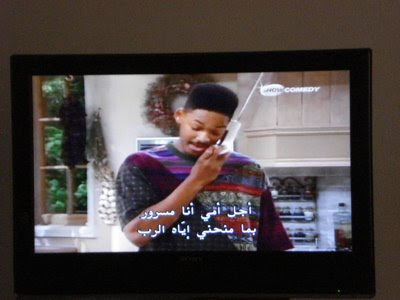 I have never made a secret of my obsessive love of television and all the wonderful hours I have spent with this surrogate parent. From the first kiss I ever shared with Hubby to learning where Will Smith was “born and raised,” most of my happiest memories include television. Heck, I even remember when Friends premiered because I was watching TV that night in Halifax on a friend’s bed in Bronson House at Dalhousie.

Today’s history lesson starts in the Midwest where we received cable completely free of charge. Television in India meant that we paid approximately $7.00 per month for six English channels and a million channels broadcasted in languages I don’t speak. Kenya’s cable boasted far more English but at the cost of a bill about twelve times that of the one we paid in Delhi. All of which means that in a span of three years our cable bill demonstrated a significant rate of inflation.

Not too long ago, we purchased our first flat screen TV and had cable installed. While it was initially a wonderful experience, I have come to almost regret the introduction of American-style programming in our home. You see, our new cable package comes complete with football. And not just the cute boys in short shorts kind either. You see, I got to spend Sunday night watching American football. Aren’t I a lucky, lucky girl?

While I don’t mind watching TV shows from the early 80’s like Knight Rider, and The Incredible Hulk, I draw the line at traveling halfway around the world and still having to watch crappy American sports that I don’t understand or like. When the “throwy guy” got injured last Sunday and Hubby was busy mocking people in his Fantasy Football League, I was simply amazed that he could have actually injured himself while wearing sixty pounds of protective padding.

So now, my first great love has betrayed me, and no amount of NCIS, Buffy, or Ugly Betty reruns can make it better. At this rate, I may actually learn to prefer the outdoors rather than the tender love that cartoons, 80’s movies, and old sitcoms can provide for me. Inshallah that will never, ever happen.
Posted by MsTypo at 8:54 AM

Don't forget the Monday night football too. :(
We had Magnificant Seven on this week but it was during the BBC news so...didn't get to watch. More boos!
merthyrmum

Did you know about about 'Showtime - Cable Network Egypt'? Movies, sports and series. I am especially enjoying the movies WITHOUT COMMERCIAL BREAK!

Btw, yep the Rock Slide local poorly covered. Just like the fire at the Maglis Shura. Check out

with a picture taken by the writer of this blog of the firemen PRAYING during the blaze...

No sympathy here >;-) Sorry. I am anti-TV. I do not mind DVDs of series and movies, but we have not had cable or satellite since '04. I was a 'go out and play' kid, my dh was raised by the TV - we've clashed. But I've had my way so long now that when we go back home to the US, I have to explain to our kids what channels, or commercials, are. Whoo-hooo! (and no football either - yay!)

You badmouthed Buffy. I...

So, to go against the general trend here. I'm in Cairo until early December, and I would love to catch some NFL games. As far as I can tell there's no cafe or anything where that's an option. So what did you do to get watch some football? I would love to see the throwy guy toss the ball to a running guy while a pushing guy keeps the other pushing guys away from him.

Tim thank you for confirming that i totally had the correct technical names for the players!! :p We watch football on ShowSports4. We get two sunday games live and i think we get the one on Monday. I think. So check out and get the deets with Showtime. :)

Showtime. Thank you so much. Is there anything I need to make sure of, or can I just call the number on their website and magically it'll work? I'm brand new to the whole apartment-in-Cairo thing, so if there's any wisdom you can impart that would be awesome.

Thank you :-) look at that emo boy hair over this blog:
http://emo--boys.blogspot.com