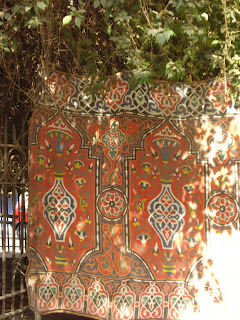 When Daylight Savings Time kicked in on Thursday night and we set our clocks back an hour, it was the first of many signs that Ramadan was imminent. Other signs that we were slightly less informed about ahead of time included the zoo of people to be found at every supermarket in Cairo over the weekend. We decided to take a Yellow Cab to get to City Stars so that we could buy a printer and go food shopping. We were successful in the former task, as for the latter… well, let’s just say that we left our cart in the middle of the store and fought our way out of the sea of humanity that was busy pulling everything off the shelves as if it were Christmas Eve and the day before a snowstorm all rolled into one.

Scary moments at Spinney’s aside, Ramadan has been interesting to experience thus far. This month of fasting, which kicked off on Monday, has made Cairo an oddly quiet place. During the day, no one eats or drinks so much as a glass of water, good Muslims also abstain from smoking (normally an Olympic sport here), and around 2 p.m. the entire city hops in their cars and heads home.

This exodus from the office is so that people can make it home in time for iftaar – the meal that breaks the fast. This daily feast is highlighted with a variety of foods, many of which I would describe (incorrectly) as Lebanese. Although we have not yet attended an iftaar in Cairo, Hubby was present for one when he was in Pakistan and he still raves about the food almost three years later. 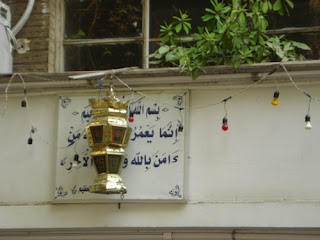 From the front window in our flat, Ramadan appears to be a quiet time (post-iftaar), a bright holiday thanks to the beautiful sheets of red fabric that are draped here and there throughout our neighborhood and the gorgeous lanterns that seem to be hung everywhere in honor of Ramadan. The other big difference that we have noticed is the prevalence of firecrackers that the local kids have been setting off every few minutes.

In case you were wondering if the religious fasting extended to non-Muslim foreigners like myself, the short answer is no. While it is considered polite to eat indoors and where your hungry Muslim neighbors can’t see you, restaurants are still open and willing to deliver. According to Hubby, people at the Institution were behaving as if it were any other month as the food kiosks and vending machines were all doing a booming business.

Once I have actually been invited to and attended an iftaar, and once I have gone out to experience Cairo during Ramadan more fully, I promise to blog about it in more detail. In the meantime, below is a list of words that come up a lot during Ramadan. Many thanks to the blogger who put this little wiki together – it was very educational.

If you do get invited to an Iftaar watch your hands and fingers...I have heard it is every man /woman for themselves when the cannon sounds...LOL

I've passed your message along to Sara, she's on the move just now (but when isn't she) but hopefully will get back to you soon.