You Can Quote Me on That 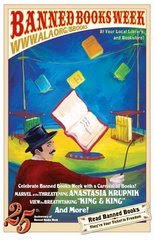 Here is some more food for thought on the issue of censorship:

"If your library is not 'unsafe', it probably isn't doing its job."
- John Berry, Iii, Library Journal, October 1999

"There are worse crimes than burning books. One of them is not reading them."
- Joseph Alexandrovitch Brodsky

"Everyone is in favor of free speech. Hardly a day passes without its being extolled, but some people's idea of it is that they are free to say what they like, but if anyone else says anything back, that is an outrage."
- Winston Churchill

"If librarianship is the connecting of people to ideas – and I believe that is the truest definition of what we do – it is crucial to remember that we must keep and make available, not just good ideas and noble ideas, but bad ideas, silly ideas, and yes, even dangerous or wicked ideas."
- Graceanne A. Decandido

"Don't join the book burners. Don't think you are going to conceal thoughts by concealing evidence that they ever existed."
- Dwight D. Eisenhower

"If the human body's obscene, complain to the manufacturer, not me."
- Larry Flynt

"They that can give up essential liberty to obtain a little temporary safety deserve neither liberty nor safety."
- Benjamin Franklin

"Books won't stay banned. They won't burn. Ideas won't go to jail. In the long run of history, the censor and the inquisitor have always lost. The only sure weapon against bad ideas is better ideas. The source of better ideas is wisdom. The surest path to wisdom is a liberal education."
- Alfred Whitney Griswold, Essays on Education

"Where they have burned books, they will end in burning human beings."
- Heinrich Heine

"To prohibit the reading of certain books is to declare the inhabitants to be either fools or slaves."
- Claude Adrien Helvetius,

"Civil government cannot let any group ride roughshod over others simply because their consciences tell them to do so."
- Robert H. Jackson

"Books and ideas are the most effective weapons against intolerance and ignorance."
- Lyndon Baines Johnson

"Censorship, like charity, should begin at home; but unlike charity, it should end there."
- Clare Booth Luce

"One cannot and must not try to erase the past merely because it does not fit the present."
- Golda Meir

"A censor is an expert in cutting remarks. A censor is a man who knows more than he thinks you ought to."
- Dr. Laurence Peter

"What is freedom of expression? Without the freedom to offend, it ceases to exist."
- Salman Rushdie

"Censorship reflects a society's lack of confidence in itself. It is the hallmark of an authoritarian regime..."
- Justice Potter Stewart, dissenting Ginzberg v. United States,

"Censorship is telling a man he can't have a steak just because a baby can't chew it."
- Mark Twain

"Adam was but human - this explains it all. He did not want the apple for the apple's sake, he wanted it only because it was forbidden. The mistake was in not forbidding the serpent; then he would have eaten the serpent."
- Mark Twain

"There is no such thing as a moral book or an immoral book. Books are well written or badly written. That is all."
- Oscar Wilde
Posted by MsTypo at 5:08 AM