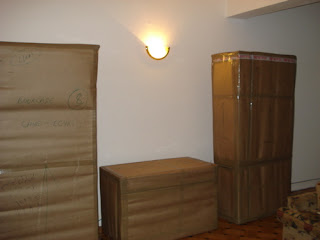 Yes, it's true, my long awaited sea-shipment finally arrived! *cue dance of joy* Although my flat has now been designated a disaster area due to the mountains of boxes, I honestly couldn’t be happier. *bounce* Not that the move-in was without its hiccups (trust me, there were plenty) but as far as I’m concerned, the entire process has been a success.

I will be blogging about the entire process later in the week but wanted to share one quick story with you that I hope you will enjoy as much as I did. Our somewhat extensive DVD collection arrived with our air shipment but I never got around to unpacking or cataloguing it since the shelves where I keep them were in the sea shipment. Naturally, once the movers had placed my teak shelves in their new home the first thing I unpacked was my DVDs.

The first thing I noticed was that the “Running Man” DVD I had previously joked about had definitely been used for pirating purposes. Not only was it one of the few DVDs that had been removed from its bubble wrapping but I also noticed one small telltale sign on the box that had eluded me on 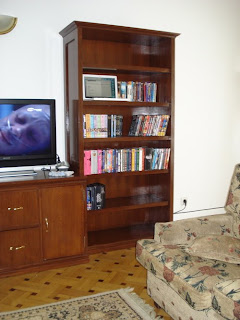 first glance. Someone had split the cardboard wrapper open to photocopy it, and then crudely taped it back together. The other box they had definitely had their paws on was my “Matrix” box set, which was no longer in the correct release order I had left it in. Moreover, they hadn’t even replaced some of the DVD’s in the right boxes.

But wait, it gets better.

In that obsessive OCD way I have, I carefully organized and alphabetized each box before assigning it a place. Once all the boxes were neatly arranged, I opened the Excel file on which I had catalogued all our DVD’s prior to moving. At first glance there was nothing missing, but thanks to my meticulous list I discovered that there are definitely some perverts in the Egyptian Custom’s office. The only DVD that I could find missing, was Tyra Banks’ 2000 hit “Coyote Ugly.” Trust me when I say that we have much better PG-rated, DVD salaciousness from which they could have chosen. Hmmph! (Luckily, we took the non-PG stuff with us in our hand luggage.)

Isn’t it amazing that what would normally make me seethe with anger can now only make me giggle uproariously thanks to the arrival of a few boxes. You know, I think Egypt is starting to grow on me.
Posted by MsTypo at 3:56 AM

Wonderful news! Anything (else) broken or missing?
merthyrmum

At least they copied the pother DVD's and left you with the original. How long did it take for the shipment to arrive?

And now the real fun begins-- maing it feel like a real home!

I agree very considerate for them to just copy (most of) the DVD's... it is quite amazing what people deem kosher to steal - or perhaps think will go unnoticed?

Sounds like you did well - Have heard far worse stories... we were lucky with the DVD's too...

Oh my! You are so organized! See, it's people like you who take the extra organizing talents, leaving people like me with only barely enough skills to keep the DVD's on one set of shelves, much less in order, in the proper jackets, etc. ;-) Just teasing! I am so happy to hear that you got your things :-) !!! Happy Dance indeed... no worries about bugging downstairs neighbors either, because this is usually a dance done whilst floating on air.