In Which I Seriously Freak Out

Last night, I bragged to Hubby about how all of the boxes were unpacked. While not everything had a home yet and none of our artwork is hung (stupid plaster walls!), “The place,” I told my husband, “is finally starting to feel like home.” After mutual pats on the back for our unpacking prowess and the dent we had made in our newly grown mountain of laundry, I continued to putter around adjusting frames and throwing out random pieces of paper.

That’s when it happened.

I was perched on the daybed watching some random program on TV when I noticed a bag I knew was filled with an incomplete knitting project. My eyes drifted right to my unsorted knitting books and I smiled thinking of all of the projects I could now procrastinate about. More importantly to my puttering brain, it was a hint to find a home for my needles, box of yarn, and other assorted crafting items.

I wandered into the back room and mentally catalogued the items I had unpacked and knew had not been stored into large, plastic bins. I was able to check off crystal, cutlery, and unneeded sports equipment, but no needles. I tore into a laundry basket paper-wrapped objects I couldn’t immediately identify. “NO!!!!!!!!!!!!!!!” I literally screamed across the apartment, tears burning their way down my cheeks.

“Call the Professor!” I urged Hubby.

“Why?” he asked calmly, unwilling to give into my rising hysteria.

“I think,” I choked. “I think I left all of my knitting stuff back in Nairobi!”

“Where?” he asked again in a somewhat disinterested tone.

“Remember that cupboard I told them to ignore? All my needles, notions, and knitting things were in that cupboard! I can’t find any of it! Not even my Jamaica basket with my sewing needles. What have I done?” My voice was becoming increasingly high-pitched the further into despair I fell.

“Could they be in there?” He pointed to a series of plastic drawers I had set aside for him to go through. 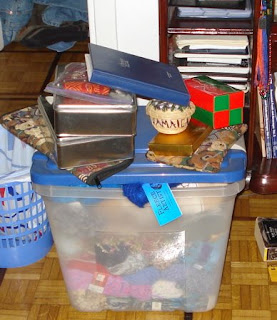 After spending several minutes trying to open the drawers from the back, I finally turned them around and what I beheld, without even opening the drawer, filled my panic-stricken heart with hope. Sitting in the top drawer were several tins of what I knew to be filled with circular needles and buttons. Behind those were cases of straight needles.

I attack hugged my husband and thanked him for his calm, even temper. “They’re here!”

“Whatever. You’re such a spaz.” And with that he sat back down at his own laptop, shook his head, and tried to pretend that he wasn’t married to this crazy lady.

I really do have the best husband ever. *sigh*
Posted by MsTypo at 3:28 AM

It's so exciting moving in, isn't it? Glad you found your stuff...

Thank goodness--although I am sure that Lynn and Mary could have helped replenish! Good to see the needle basket etal are being used.
Does that mean the afghan will be finished soon?
merthyrmum

Ohhh yes... When we moved last year, I set aside a whole "Do Not Pack" cupboard with things I thought we'd need soon after arriving. Then I completely forgot to put those things into the car. We had to call up and beg the landlords to send it all to us later on. Ugh. I'm glad you found your things!

Thank goodness you found them! Whew!!!

That must have been a HARROWING time. I would hate to lose my needles etc.
Glad you found them!

I'm so glad you found them but I have to ask you this? How can you feel like knitting when you're living in a hot climate? I used to knit a ton in Denmark, but very rarely in S. California. I just find that palm trees and knitting are incompatible.

Gosh that sounds exactly how I would react! Don't give yourself a heart attack lol. I am glad they turned up. Thank God for calm husbands who let us spaz!