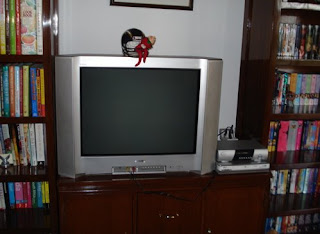 I could pretend that I’m not a TV addict but I think that we all know better. I watch more than the average amount of television and I’m okay with that since it gives me great fodder for the blog. For example, my husband is not a big fan of “Friends” but we watched it when it was on NBC and continue to catch it from time to time in reruns no matter where we are in the world. Moreover, he uses it as an excuse to legally cheat on me.

Allow me to explain. The episode in question had Ross and Rachel composing “lists” of five famous people that, if they met in them in real life, sleeping with them would not be considered cheating. On the show Ross famously removed Isabella Rossellini because he wasn’t likely to meet her in real life. Naturally, at the end of the episode he meets her at Central Perk but it was too late because he had laminated his Isabella-free list.

Ever since that episode aired, Hubby and I have discussed our own lists. We frequently debate the degree of fame one must attain to be legally allowed on “the list” but have yet come to any definitive criteria. I also added a rule (must to Hubby’s annoyance) that we are each allowed to veto ONE person from the other’s list.

Hubby changes his list on a fairly regular basis but a few women have permanent spots: Kate Winslet and Natalie Portman come to mind. I have long since vetoed Julianne Moore as I think he can do better.

Personally I have never been able to come up with five men good enough to replace my Hubby for a night. Hahahahaha! Just joking! I amuse myself.

Without further ado, my list:
So who would be on your list? Who would you veto from your Significant Other’s list?
Posted by MsTypo at 6:31 AM

Excuse me, lady, you forgot someone from your list.

thanks for visiting me the other day! Your right beer is insanely expensive :)

I have always dreamed of going to Cairo since I was a little girl. I look forward to reading more about your wanderings.

I heart friends :) I recently watched that episode and completely agree with Taye Diggs :)

Here's what a super dork I am: my list might very well also include Jon Stewart (laughing can be so sexy) and ... Barack Obama (see: http://www.flickr.com/photos/mattwright/400394507/)

Matt Damon might make the list of late. Leonardio DiCaprio, too, even though I don't heart him the way I did as a swooning teen. Very sad that I can't have River Phoenix on my list too.

I really don't want to know my husband's list. Seriously.

I love to watch TV too! And LOVE friends!! So we have 2 things in common already.

Thanks for your visit to my blog today. You should definitely come to Paraguay to visit some time!