Welcome to the Neighborhood

Last week, Christine asked about “the people in my neighborhood” and had me singing Sesame Street songs for about two days. Once the effects of my Oscar and Big Bird induced insanity had worn off, I started looking around for things I should tell you about my small corner of Cairo. 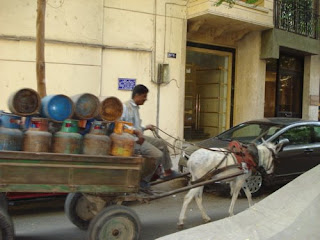 The moment I stepped outside my door, this cart passed by. I’m not sure about other Cairene neighborhoods but mine seems to have at least two or three delivery guys who travel this way. The gas cylinder guy is my favourite though since he tends to clang musically on the pressurized containers to get people’s attention. 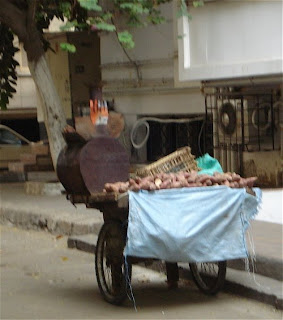 A few steps down the road, I saw the sweet potato vendor sitting in front of one of our local mosques. This gentleman can usually be found somewhere along our street early in the morning so that people can purchase one of his yummy sweet potatoes for breakfast. 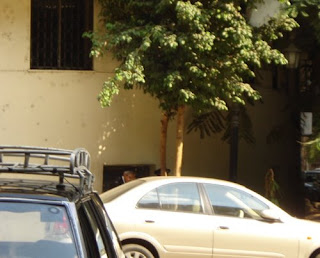 This is the intersection where I practice some of my very bad Arabic with our local policemen. (That’s them hiding behind the car, sitting down, and enjoying a break.) This corner is worked by the same few guys who always wave, say hello, and bravely endure my attempts to greet them in their local language. I’m not sure what use they would be if something actually went wrong, but at least they’re friendly! 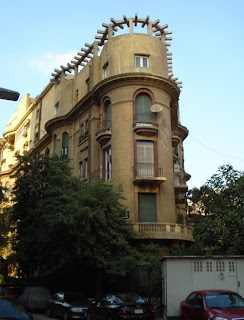 A quick glance to my left, and I can see this cheese wedge building. It isn’t a person in my neighborhood but Hubby likes the architecture of this particular edifice. 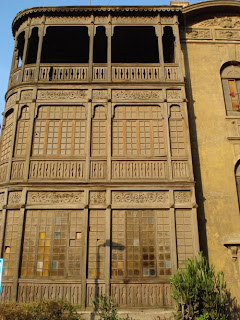 He also likes the windows in this building. I’m not sure who lives on the other side of the glass but I always imagine them to be artsy types. 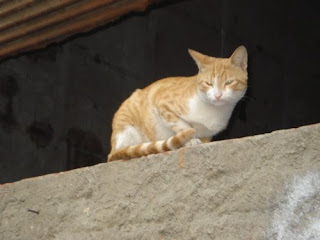 Like any neighborhood in Cairo, the stray cats here rule the streets. They can be found under cars in the shade during the day, and atop them in the early evenings. I even know several people who have adopted these street cats and brought them home. Given how adorable many of these cats are, it is probably only a matter of time before we open up our own flat to at least one of the local kittens. This particular feline was busy watching an empty building and wasn’t amused that I had disrupted its diligent study. 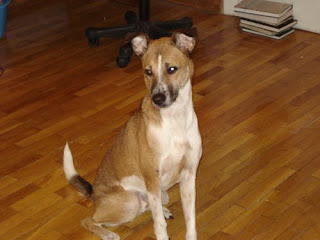 Our final picture is a local baladi dog named Alexander the Great who lives a few floors down from me. Although Alex’s humans are very nice people, he kindly adopted Hubby and I into his family and has been known to guard our flat whenever he visits. My favorite trick, however, can only be seen when Alex leaves – he opens the elevator door all by himself! That’s a great dog!
Posted by MsTypo at 2:58 AM

One of my favorite photos from Cairo is a donkey cart at a gas station. You have a lot of wonderful opportunities for writing, living in such a colorful city! (Colorful as in character, not dust!)

I like the 'ting ting' of the gas delivery guys too.. how odd is that? What should be just noise is really very homey.

Thanks for the tour! I'm in love with Alexander the Great and his lift-opening abilities... Amazing!

I loved that post! I love the donkey cart and the sweet kitty! What a neat place you get to experience!!

Hey, that could have been my neighborhood! Only the yam-guy doesn't get here until the evening. The fuul-guys are about in the mornings as is a man who sells rice puddings.

Do you have a garbage man? Ours rings the bell every other day asking for our rubbish!

I have a picture from Montevideo of the garbage man's cart.
I also like Alex as he reminds me of Bandit. The triangle building is like the Flat Iron building in Toronto!
Thanks for the views of the neighbourhood.
merthyrmum

i located your place from the photos, iam coming for a visit now, kidding :)

nice place and the guy like to clang on the gas cylinders cuz it's a kind of a Russian rolit.

i like sugar potato too, specially in cold winter nights

don't hurt the egyptian cat cuz this will make your ba suffer a lot in the second life.

Oh, I love this post. I love these glimpses into the every day life. And it makes me wonder what the gas cylinder guy is doing. And what are they for. And is that really a donkey pulling his cart? Are there lots of donkey pulled carts right there along with the cars?

And the sweet potato guy...oh, I can come up with a million questions...

hey Kat, nothing cheer me up like non Egyptians questions about everyday life glimpses, it's so cute :)

Thank you for a peak into your neighborhood.

Such fun pictures! I've got to tell you though, if I had the money, I'd send you my books. My friend referred to it as "crack on paper". I just loved them. Will read them over and over I'm sure.

I am very jealous of all the experiences you are having living in Cairo. It is a place I would love to visit sometime. But until then, I will live vicariously through your posts. :-)