When the Developing World Attacks 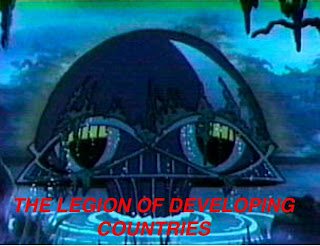 There is nothing worse about living in the developing world than when the country you have chosen to call home decides to remind you who holds the upper hand in your relationship. It should be noted that these unpleasant reminders will only come at the most inconvenient times like when your guests arrive, your spouse’s boss is coming to dinner, or you made plans to go out and have lunch with new friends.

India liked to remind me that She was in charge by poisoning me. Don’t laugh; I spent my 8th wedding anniversary wishing I were dead thanks to an ill-timed bout of giardia. For those of you unfamiliar with this amoeba-based ailment, I have two words for you: both ends. Happy anniversary, baby!

Kenya, on other hand, liked to use the elements to torture me. Or rather, one element in particular – water. My big plans to have lunch with Sicky? The one-hour installation of my water pump took a week. My first set of guests arrives? Thanks to the rainy season and the wonderful building codes in Nairobi, it rained in my apartment, over my furniture, and on my last nerve. A year later, I thought I had finally come to an understanding with Kenya and that she and I were finally friends. I was wrong. Once again, guests arrived that I really wanted to impress and my water pump died shortly thereafter, with a complete drying up of all the water available to my apartment.

When we moved to Egypt, I thought I had left my developing country curse behind me. Sure, we had a few hiccups during our first two months but nothing had happened that truly made me feel that Egypt hated me. Yet again, I was wrong.

Last week, I was incredibly excited to attend a friend’s surprise party. I packed my purse, made taxi packets so I could get to the party venue, and I made salsa that I told Hubby he could have no part of. Although I cannot confirm this, there were even rumors that I had picked out an outfit in anticipation of my outing.

That is when She struck. First there were twinges of tummy trouble. But I was able to quell that first incursion with some light medication and the power of my cast iron stomach. But Egypt would not be thwarted because soon my sink started leaking and then the gurgling beneath my bathroom exploded into a smell so rank I was afraid it would seep into my clothing. The emergency plumber I requested naturally took his time arriving, investigating the problem, and eventually telling me that there was nothing to be done about the stench. It wasn’t the pipe, he explained, it was Egypt.

Yes, I have been defeated by developing countries before, but I thought that Egypt and I were going to be friends. I thought She liked me! But now I know Her true colours and will be ready the next time She tries to get the better of me.
Posted by MsTypo at 2:11 AM

Mmm, plumbing problems. The worst. Though one time I lived in an in-town neighbourhood, and the people across the road from me decided to start raising pigs. The stench from that was unbearable.

I thought you were getting sick again at the end. Were you? I remember my gas stove exploding in Belize right before we had guests over for dinner.
Now I can laugh about it, but not then.

Giardia - Oh China was the name of my tormentor!

I am ashamed to say I laughed at this post - it was funny and so familiar. Hope the leaking has been stopped even if you can't do anything about the smell.

I do love your writing style, and I hope Egypt is smelling better today.

You have my sympathies!!

Oh no. But...why does it take two months for Egypt to smell?? Here's hoping it's coming up roses today...

She doesn't hate you... She's just glad she finally found you! The one that India and Kenya had told her was soooo much fun to play with!

Sometimes the pipes just stink. Make sure to close the traps, keep the strainers in place all the time. I often pour white vinegar down the drain.

Hope you are feeling ok. My guys, big and little, are fighting a stomach thing and fever. Might be a virus.

I just have to add one thing: YUCK!

Reminds me of Kuwait.
It always stunk in our place, we finally got a hang of it, but it still came back from time to time.
And hey, no wonder, all the technicians came from Egypt.....
(evil little grin)

And I only say air conditioning....an endless story in Kuwait, here's one:
http://nicoleb.org/b2/index.php/air-conditioning-adventures
I love that picture :P

But no worries, even in Hungary we have loads of *fun*!
:)