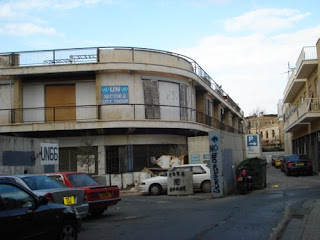 Hubby is somewhat obsessed with Turkish Cyprus (TRNC). So much so, that we not only walked across the border between the two parts of this divided island, but the following day, we drove back to Lefkosia so that we could drive across the border and enjoy the seaside. To properly demonstrate the extent of his newfound obsession, I should include a photo of him at this very moment as he is currently looking into Turkish property options in Cyprus.

Cypriots are proud of their Greek heritage. But their Turkish counterparts are even prouder. While we were still almost 20 kilometers away from Lefkosia we could see the not so understated Turkish and TRNC flags that had been embedded into the mountains before us.

The Turkish love continued on the other side of the border where we encountered more flags than we could count. Also popular were statues of the Turkish ruler Ataturk – flanked by the two flags.

We crossed the border on two different days and in two different ways. The first time we walked across. This UN guarded crossing was located at the end of a long 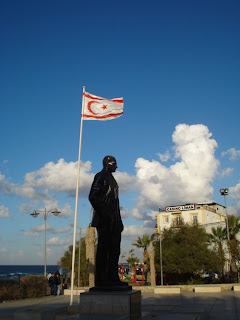 pedestrian mall (where Hubby bought himself a new pair of shoes). The old town we discovered on the far side of the long corridor didn’t have much to recommend it. This could have been the result of December not being a high tourist season but the entire old quarter felt somewhat run down.

Our stamped sheets of paper (for some reason border officials did not stamp anyone’s passports at either crossing) in hand, we wandered the streets enjoying the medieval fort and the familiar minarets that dotted the skyline. 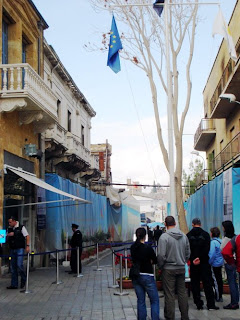 The following day, we drove back to Lefkosia so that we could drive across the border. This required our paying additional insurance on the car (about $20 for rental vehicles), and having those same pieces of paper stamped for a second time. After the very modern look of Greek Cyprus with its numerous McDonald’s and far too many Pizza Hut outlets, TRNC was quite a switch where the only major international brand we could see was HSBC.

The differences between the two sides of this coin went further than simply consumerism. It’s hard to explain but the Turkish Republic of Northern Cyprus simply felt less developed. Hubby and I both agreed that driving along mountain-lined roads was very reminiscent of Turkey itself. As opposed to Cyprus proper which felt very British. (As I said, it is rather hard to explain.) 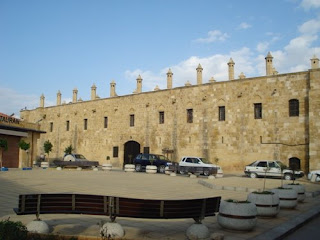 Turkish). My low blood sugar (read: Typ0 grumpiness) that day meant that I once again failed to buy a single souvenir although we did enjoy a wonderful stroll despite the light drizzle.

We bumped into several people munching on local pastries and others looking into the windows of the numerous jewelry shops. Further down the road, several men were gathered on the stone wall fishing and teaching their sons the art of the perfect cast. No one seemed to be catching much other than a cold but they all seemed to enjoy the camaraderie of the moment. Hand in hand with my sweetie, that was something I could definitely understand.
Posted by MsTypo at 2:02 AM

Fascinating!
For me this is so unfathomable, because when I travel it´s just to Canada and back. And it´s all "consumerism" there....
I dream of traveling to Europe some day and exploring the different country´s, but I know in my heart it will probably not happen. So I´ll just have to "live it" through your blog! Thanks for the interesting report!

This is so wrong, "Cypriots and their Turkish counterparts". In Cyprus there are Greek Speaking Cypriots and Turkish Speaking Cypriots.
On the other hand, all the flag fethis in the northern part of the island is not because of people there are proud of it, but because of it is about politics and occupation forces put them there. EVERYWHERE!! There is a very strong assimilation in the northern part of the island. Turkey and her army are carrying people from Turkey and giving houses/lands which were owned by Greek Speaking Cypriot pre 1974. They are trying to change everything into Turkish. According to them, Turkish Speaking Cypriots are not Turk enough and so they use their pressure in every step about every subject. And all the world just watch this occupation and assimilation.
We are CYPRIOTS living in both sides of the tragic "green line" and we are proud of it. We can have different languages but this doesn't make one a better Cypriot than the other.

So sweet - hope you also managed to munch on a pastry to shoot up your blood sugar level!

I never made it to the Turkish part of Cyprus when I was there, as it was not as easily accessible. I believe that not many tourists from Europe spend their vacation in the Turkish part; all travel to the Greek part exclusively. Thank you for sharing your experiences, it was an interesting read.

Sounds like such a wonderful time. We love to just explore new places with out guides, but by local word of mouth. And to be close to all that goes on. Sounds like you did a lot of that.

Wow, you are writing of places I'll never see...it is so interesting, thanks.

I love this travel story.
Northern Cyprus reminds me of Hungary.
I'm sure you guys would love the rural parts here.
It can be taxing though.
Try to get something done and you have to go quite a ways. And if you get there, they don't have it and you wait forever, communist leftovers ;)

I'd love to see that turkish part. Looks very intriguing!

I never knew how different the two sides of Cyprus really were. Thanks for sharing!

And I totally understand about your low blood sugar. I am the SAME way!! Peter knows when I need to eat because I get really grumpy. But he also understands that I don't do it on purpose.