Ruins with a View 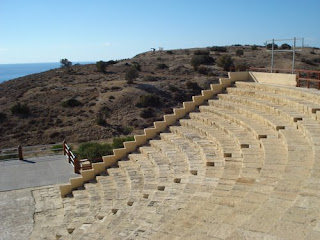 I realize that I’m about to go out of chronological order but since I’m your cyber tour guide today, it seemed like my prerogative. (Cue Bobby Brown soundtrack.) In any case, on Wednesday morning we celebrated Hubby’s birthday by popping open a bottle of Champagne to enjoy with our room service breakfast. After we sobered up enough for Hubby to drive, we checked out of our hotel and drove to Ancient Kourion.

The first thing you notice about Kourion (once you’ve found it in spite of the lack of accurate signage), is that it is stunningly beautiful. To be exiled to this haven of serenity was no great punishment in any age. Sure, I wouldn’t have wanted to walk around the archeological site in the heat of a July sun but on that sunny day in December it seemed like a slice of heaven. 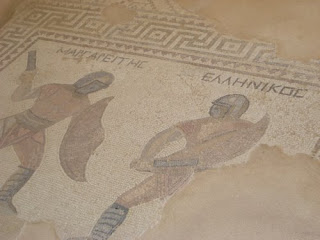 Our first stop was the amphitheatre. Sadly it is fairly obviously a reconstruction of the real thing but that only annoyed me because I was a theatre geek in school. I tried comparing Kourion to the Theater of Pergamon in Bergama, Turkey, pointing out the correct seating arrangements in traditional Greek amphitheatres but Hubby just patted my head and told me to go recite some of Sappho’s lesser known works. 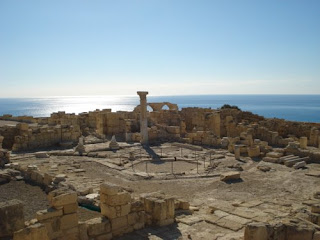 Despite my need to be an ancient Greek Drama Queen, Hubby enjoyed the amphitheatre and took plenty of photos of the area. He quite correctly pointed out that although the theatre is supposedly still used in modern times, most spectators would probably enjoy the beautiful views more than whatever play was being performed. As we looked down on the town at the foot of the hill we looked at each other with the same thought, “I could live here.”

After a short walk up the hill, I wandered through what was marked as an “early Christian Basilica” which dated back to the 5th century AD. Prior to Christianity, the site was also home 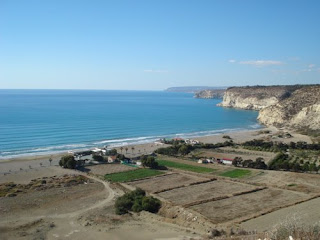 to a shrine to Apollo. No matter which god was worshipped here, the parishioners surely suffered the same fate as the theatre goers down the hill – the view was certainly far more of a religious experience than anything a priest would have said.

The mosaics that remain on this portion of Kourion are only outdone by those over by the House of the Gladiators. I looked and found no proof that Russell Crowe had ever lived there. Despite being saddened that I couldn’t throw things at the Australian actor, I was incredibly impressed with the preserved tile floors. These appeared to be a gladiator hall of fame. Most of us could do worse than find our mosaic likenesses still around two millennia after our heyday. 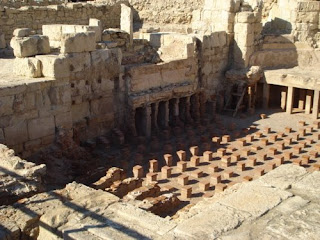 While local artisans worked on my likeness (guaranteed to be in perfect condition in 2000 years), Hubby wandered off to look at the Roman baths. Although the photos all looked like display miniatures, he swears they were really full sized.

After our morning of boozing it up and wandering through the past, Hubby and I enjoyed some beef döners for lunch and headed back to the airport and the reality that awaited us in Cairo. Luckily, we still had a few days of vacation left to enjoy upon our return. And luckily for you, I still have more Cypriot tales to tell.
Posted by MsTypo at 3:27 AM

I'm in awe of the amount of ruins in this part of the world. How was there this much slave labor? Surely the work would kill you quick?

I love the ancient greek and roman ruins. it just goes to show you how much can be accomplished when you don't have t.v. or books!

Between Ancient Greek, Ancient Roman and soon Ancient Egyptian ruins, I better hone up on my ancient history soon!
Seems you had a great time--looking forward to more photos.
merthyrmum
(the Fugate Family trip to Alexandria looked great)

And throwing things at Russel Crowe? Surely not...

I look forward to more tales..

Sounds like you had a wonderful time visiting ancient ruins and sites. I also remember driving around Cyprus some 20 years ago seeing exactly what you describe. To me it is always a special, almost magical feeling when I find myself surrounded by rocks that used to be buildings, places of worship and living quarters in ancient times.

The amphitheatre at Kurion is used fairly extensively during the summer for theatre performances... but the views aren't a distraction because the performances start around dusk (8-ish) and are thus mostly after dark. We've seen some wonderful Shakespeare plays done there, and last year my family helped with a musical production at Kurion.

Nice to have a new nick name for you ;)

And did I mention lately that I would love to go there?

Uh, and I forgot: Gorgeous pictures!
:)

Those views look spectacular! And I prefer to see places like that when there are not alot of people around.

How awesome! Do you still get excited and overwhelmed about all you get to see? I do.

PS- We are booking our trip for Spring Break on Monday. Guess where we are going? Egypt! We are taking a Nile cruise. Tips?

these things you are getting to see, are so amazing to me!

Now you really have me wanting to visit! It looks so beautiful.