We saw many great sites during our time in Cyprus but I don’t want to bore you all with a moment-by-moment trip-tic of our six days in paradise. Instead, I thought I’d share a few final highlights. 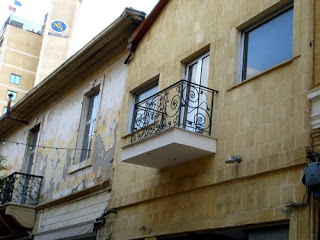 I took this photo while we walked down the pedestrian mall in Lefkosia. I just like the juxtaposition of the new and the old. It didn’t hurt there was a fantastic jewelry shop (where I didn’t buy anything) right below the window on the right. 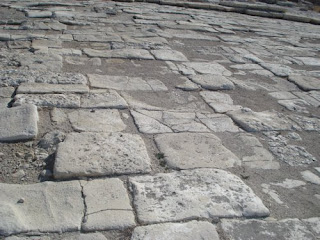 Further proof of my weirdness: When I saw this uneven cobblestone-like flooring at Kourion, my first thought was that it would make a cool grid for a really great game of hopscotch. Hubby pointed out that if people actually did that most would end up with broken bones. I replied with the verdict that whomever had the least number of injuries won. Who wants to go first? 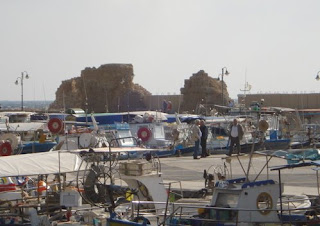 This old ruin in Pafos was really nice. Sadly, to get there you had to walk through a serious gauntlet of tourist hungry restaurant touts. 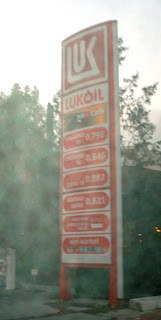 Due to the amount of driving around we did, we were forced to fill our gas tank one or two times. Regular unleaded cost us about $1.10/liter or $4.40/gallon. 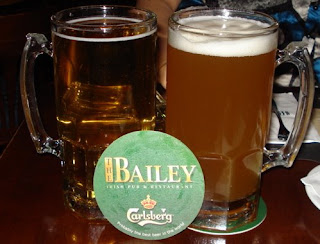 I’m going to be honest: we drank a lot of alcohol in Cyprus. Bur our favourite places to imbibe were numerous pubs to be found in almost every town. During our last night in Cyprus, we drove to Larnaka and each enjoyed a double pint. That’s right, we each drank a litre of beer (well, I drank cider but you get the idea.) The main reason for our delight is that you can’t get really good beer (or any cider) in Cairo. So we were going to enjoy ourselves while we could. 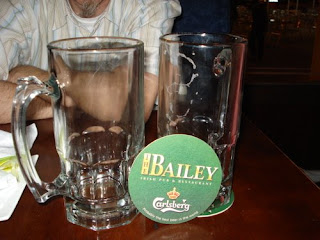 And obviously, we did. 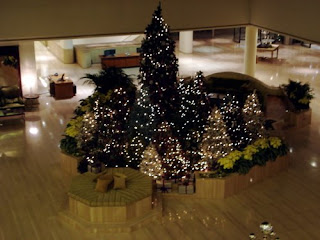 The best part of the trip was Christmas! Living in a Muslim country, I don’t get a lot of piped in Christmas music or randomly posted Christmas trees. I adore Christmas and found myself glaring at Bah Humbug-ers who complained about the constant carols and holiday spirit.
Posted by MsTypo at 2:00 AM

I always love to see the Mix of new with old when it fits. I loved that about Georgetown, Washington DC. I'll always remember that.
And no, I don't want to play that game, I rather keep all my bones the way they are ;)

I totally hear you about the alc part. We enjoyed our VISA hop every three months to Bahrain / Dubai. Get out, have fun and drink something decent ;)

Christmas I didn't miss much at all though.

I miss the Christmas-y things too! Hopefully next year we'll be in a place where we can! Although, there are some pretty creative Santas and decorations on Road 9!

i have been interested in visiting turkey someday for some time. too bad i live on the other side of the world!!

What is hop-scotch? Is that where you slam a shot of scotch and then hop up and down?

Wonderful pictures; I particularly like the beer, the cloudy one may I add, that is my favourite.
Happy to hear that you got to see a nice Christmas tree, I can understand you must miss this tradition.;)

Who would complain about Christmas carols?

I am trying to imagine what it would be like walking in my 4-inch heels on that sidewalk!

I'm gonna have to show Peter the picture of the beer....Carlsburg is a Danish beer which he loves and can't find in the US in very many places.

sorry, i have been out of pocket. lovely to see your pictures from what looks to have been a wonderful trip. glad you got a bit of a christmas fix.

A-star, A-star--it's nearly Christmas again! Yah!
I like the idea of the definition of hop-scotch. Maybe it is a mixture of beer and scotch. And then you play hopscotch on the squares?
Gas/petrol has gone down in price because of the fall in oil prices but we were at $1.40 for awhile.
Enjoyed the pictures!
merthyrmum

Was that cobblestone road for walking or for driving?

Great pictures! And I am glad you got a little bit of Christmas. I never considered how living in a Mulsim country would impact your Christmas. Interesting/

Goodness - double pints of cider? Whatever next? I love the cobbled street picture - very cool and unusual.

Sounds like a great time and much alcohol was had by all!

I like the Christmas Carols too. I have a CD in my car and every time I go somewhere I get my share of Christmas music/songs.

Oh and very nice pictures! Love the cobble stone one.

I love Christmas too even though I'm not religious.

I adore everything Christmas, too, even being quite sarcastic -- great photos!

What a fabulous trip! I'm so glad you got to have a bit of Christmas while you were there...I would really miss the music and lights and trees too...

first photo reminds me of the stuff on limningedge.blogspot.com

Love those cobblestones ;-) I too, enjoy the Christmas lights and decorations in other places.

I love all the pictures from your vacation. When we were in Honduras in April - I loved taking pictures there. It is a very poor country - just in the middle of all the beauty. And the juxtaposition is SO interesting.