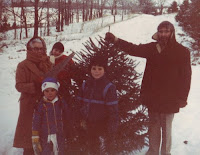 I have a confession: I am a huge Christmas freak. I have no problem with malls that play Christmas music in October. The rush of Christmas shoppers in December is simply an excuse to be happy and spread cheer among those grumpy Gus’s who left things to the last moment. And the only thing I love more than opening gifts is spending hours wrapping those that I am giving to friends and family. Yup, I’m that girl – the one who doesn’t realize that she’s being obnoxious by singing carols 24/7 or at very best doesn’t seem to care.

It isn’t entirely my fault you know. My father is the biggest Christmas kid on the planet. He still believes in Santa and it was literally a crime in our house growing up to talk about what you bought for people before the unwrapping extravaganza on Christmas morning.

Christmas in our house was a wondrous adventure every year. On Christmas Eve, we would set out a plate of three peanut butter cookies (my father’s least favourite), and a glass of Irish whiskey (my father’s favourite) for Santa. I didn’t realize that most people left milk out for Santa until I was well into my teens.

Around five or six in the morning, my brothers and I would wake-up, run downstairs and tear open the stockings that bore our names and the Santa sacks beside them. We’d giggle over the fact that Santa always left a Clementine orange, champagne truffle people, chocolate coins, and cash in our stockings year after year. Then we would debate who received the best box of Lego.

Around eight, we’d pack up our things and run upstairs to wake up my parents. Each of us would perch ourselves our my parents big bed (I always sat near my mother’s feet), and one by one we’d open our stockings again and exclaim at the lovely presents Santa brought us. My parent’s Santa sacks were filled with Santa’s adult gifts like a bottle of Port for mum or Glenmorangie or my dad.

When we returned from Christmas mass, the gluttony of the day would begin. First, a proper Irish breakfast including blood pudding, white pudding, sausage, bacon, freshly squeezed orange juice, and all the trimmings. After our heart attack inducing meal, my mother would start working on the turkey, while my brothers and I would gather all the snacks we had made the day before – spinach dip, herb dip, cocktail shrimp – and carry them to the basement. There we would remain a state mandated distance from the piles of gifts surrounding the Christmas tree we had cut down and trimmed weeks before.

Upstairs, my father would light the candle in the front window that told people they were welcome in our home for the holidays. Then he would add the baby Jesus to the crèche. 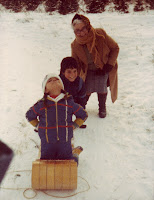 By mid-afternoon, the basement would be a minor disaster area of wrapping paper and ribbon. Earlier we would have elected someone to play Santa and hand gifts out to each person in turn. One by one, we would open the gifts from each family member and then wait for our turn to come around again. My eldest brother would wrap his gifts in eco-friendly newspaper and my other brother would “trick wrap” gifts in off size boxes and multiple layers of paper.

Over next few hours, my mother would disappear upstairs every so often to check on dinner while the rest of us put a puzzle together or played whatever game we had received in our stockings

At some point during the day, my mother and I set the dining room table with the good Irish linen, Waterford crystal, china, and good silver. It didn’t matter that my glass would be filled with orange pop – I still got to drink out of the adult glasses on this one day each year. (And no, we are not going to take this time to discuss the one time I accidentally broke a glass and how the two pieces sat behind my spot at the kitchen table the next twenty years. Nope, no need to discuss that at all.)

Christmas dinner was always an extravagant feast for the senses. We would start with one of my father’s amazing homemade soups – oxtail remains my all time favourite. Then the main event: turkey with every single homemade from scratch trimming imaginable. To this day, I have never made Christmas dinner myself because I would never be able to create anything as mouthwatering as those meals with their multiple types of stuffing, cranberry sauce, veggies, and moist turkey.

During dinner, we would all pull on Christmas crackers and read the inevitably lame jokes aloud. It was a house rule that you had to wear your paper crown all during dinner, which is why all my family Christmas photos have us sporting goofy pastel crowns and sheepish grins. 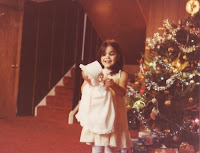 The final step of the evening was dessert. As the youngest member of the family, it was my job to carry in the flaming Christmas pudding and place it on the table in the darkened dining room. Once the fire was extinguished, we would bring out the trifle, custard, and orange pudding. (I did warn you about the gluttony.)

That was Christmas every year until I married Hubby and moved to the States. I haven’t celebrated Christmas with my family since then and I miss it desperately. My mother insists that Christmas is no longer like that since we are all so far flung now. With my brother only a short drive away, traditions have evolved and moved to his home instead.

I miss the perfect Christmases of my childhood but Hubby and I now have new traditions and since we are so far away from home, we make a point to make each year special. Santa, it turns out, knows his way all over the world and has never failed to visit us. And as long as you believe in him, he can make almost any Christmas dream come true.
Posted by MsTypo at 1:16 AM

Thanks for sharing your magical memories! I love Christmas but not the commercialism, I'm afraid.

Christmas with my family was special too as a kid. I was the one wrapping up pressies in magazines and newspapers, and burying tiny objects in huge boxes!

Hope you have a wonderful Christmas this year too!

Loved reading your story about your personal Christmas traditions! It's my first one back home in about 13 years so I am also thrilled this year!

LOVE, LOVE, LOVE this post! I couldn’t agree with you more, happy to have found a kindred spirit when it comes to the holidays. I love Christmases and they were always special in our family home.
Thank you for sharing your childhood Christmas with us, this was a wonderful read. I am truly happy to know that Santa still finds his way by your place even if you live in a very warm climate.;)
I wish you a wonderful Christmas! xoxo

That was great! I loved reading that and I wish you could go home for Christmas

That was such nice writing of beautiufl memories! Too bad those "perfect" days of childhood can never come back, right?
I wish you a special Christmas with your hubby! Hopefully you can go home for Christmas someday soon!

I didn't realize how long I'd been absent from blogger land - so much reading to do!

Oh, you are so lucky to have those pictures with you! I don't think our Christmases were quite as idyllic or predictable. I'm trying hard to establish some memorable traditions for my children that I didn't have!

you make me miss my childhood christmases. i hope my children will remember ours with as much fondness.

Our presents were generally not wrapped - Santa and his elves obviously enjoyed our toys so much, that they'd play with them all night before hurrying off to finish their rounds... trains left on tracks, dollies with their bottles, teddy bear sitting in a bike basket, etc.

Lovely story - I am sure you will continue to add to your own traditions as the years pass.

And don't forget the champagne in the orange juice for breakfast-- and the rest of the day! There was even that year when someone stole your father's fresh squeezed juice!
We will await Santa's arrival again this year. There is ALOT of snow here(more that a foot)so the reindeers won't have too much trouble with Santa's sleigh.
Felice Navidad:)
merthyrmum

what a beautiful post! thanks so much for this! it's fun peeking into the pasts of others :D

This is a wonderful account of a childhood, I loved every minute of it!

What an amazing post. I love your memories of Christmas. And the traditions you all had.

I have never had a Christmas away from my family. And I just can't imagine what that would be like. But I am sure...like you...all kinds of new traditions would arise.

And it was fun to read about another household who did the one at a time gift thing. When I went to my husband's family's Christmas celebration for the first time...it was such a free for all...that I was rather overwhelmed. And it was over so quickly.

I really enjoyed reading about your childhood Christmases! Thank you for sharing. My parents made every Christmas special for us, too, growing up. We always had lots of toys to unwrap, lots of cookies, coloring and watching our favorite Christmas shows.

That looks and sounds lovely!
I can imagine that you miss those times and am glad you and hubby make up for it!
:)

Its a wonderful, rich and personal post, very sweet to read, and I am sure your other readers, like myself ,were provoked and reminded of our own childhoods...thanks!

Thanks for the gift of Christmas traditions. I also love Christmas, way more than my hubby! Love the traditional glass of Irish whiskey for Santa!

Happy Holidays! Have a terrific 2009 and have fun in Japan.