The Year ‘Round Island 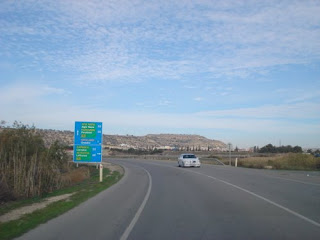 The last few months have been rather hard on Hubby. Not only did he start a new job this fall – he started a job he has never really done before. The new job, combined with commitments he has made to his old job, eventually snowballed to the point where my sweetie was more than a little stressed out. I’m pretty sure that I heard him mumbling equations in his sleep one night!

He may be the “doctor” but I was the one with the much-needed prescription for this problem: we needed to get the heck out of Dodge. Ever the realist, Hubby pointed out that the Eid break wasn’t that long and our bank account wasn’t that plump. The 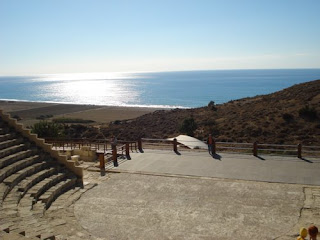 compromise we eventually reached was to take a long weekend away somewhere outside of Egypt, no more than hour away, and I had to find everything from the rental car to our hotel on deal.

After much debate and a little research, we agreed that Cyprus was the only location that made sense. Since it was technically an “off-season” the hotel we stayed at was a fraction of the price it would normally be during the summer. Sure, most of the restaurants and pools were closed due to it being winter, but we weren’t visiting the island to hang out at a hotel the whole time. 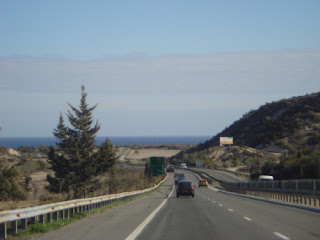 What we did do was drive. Or rather, Hubby drove while I napped in the passenger seat. Luckily, Hubby loves driving and doesn’t mind the fact that I always fall asleep within moments of sitting in a moving car. (Sadly, this trick doesn’t work on airplanes where I often struggle to get even a few minutes of shuteye during 8-hour flights.) We drove from one end of the island to the other several times as Hubby developed a rather odd fixation with the Turkish Republic of Northern Cyprus (TRNC) 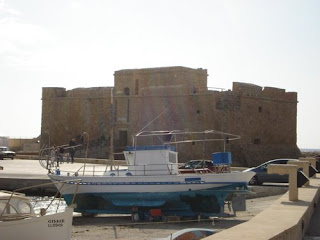 and insisted on driving to Lefkosia on two separate occasions. (Stay tuned for a blog about these trips early next week.)

I feel that this is a good time to share my biggest problem with Cyprus: no one there can be trusted to give directions. Ever. Thanks to the directions we printed from the website of our first hotel, it took us two hours to get somewhere that turned out to be maybe 30 minutes from the airport. Left and right are not bywords to whispered like curses – they’re useful directions! 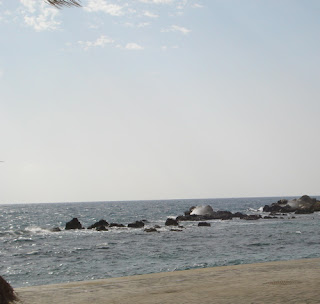 Several days later, we had the pleasure of having a detailed map, which we intended to use to find a tourist hotspot. We eventually realized that none of the streets in Lemesos are labeled. We struggled to find a single clearly marked street. The approximate distance from wherever we stood to the airport in Larnaka was no problem – there was no shortage of major city signs. But once you reached a city, finding your way around the rabbit warrens became a scene worthy of Monty Python.

From those rare car moments when I was awake, I can safely say that Cyprus is beautiful. With no shortage of historical sites to visit, fabulous Greek salads to eat, and beautiful vistas to enjoy, Cyprus is a place that I definitely see myself visiting again.
Posted by MsTypo at 1:07 PM

Seems the trip gave you and he just what you needed....I love Champagne and orange juice on a rare morning. And talk of Greek salads is so hard to hear about when you don't have one...Winter here has only begun..and I am already dreaming of my Spring garden....yum. Glad you guys had a great time! d.

Glad you still had fun even though there was no clear street sign.

Thank you for stopping by my blog yesterday and for leaving a comment while you were there :o)

How cool! I can't wait to see more of your trip...and pretend that I am a world traveler right there with ya!

Looks restful. The part about the directions is funny. I am directionally challenged in the first place, so bad directions only make it all worse!

I feel like visiting Cyprus now. Not somewhere I would have thought of before. Le Meridien hotel, looks beautiful. Was it as nice as the hotel looks? My husband also needs to destress. Maybe we'll take a short trip towards San Diego.

I'm sorry...I forgot to tell you that I have a new URL: http://notyetanexpat.blogspot.com/

However, I keep getting unpleasant comments even though I changed my URL.

Sounds great ... hope you managed to see a bit of the country in between catnapping!

Are you sure you ended up in Cyprus and not Jordan? No one can give you directions, no street signs....imagine trying to get food delivered to your house - when it doesn't have a name!!!!!

No directions.. hey, just like Cairo?? I can sure understand the joy of driving though. I like to drive and really miss good open road cruising.

That looks like a gorgeous place. We almost went there while in Kuwait, but we decided we are closer here from Hungary if we want to go.

Street signs,...., yeah, I know what you mean. You hardly find anything while you are in the Hungarian country side. *shakes head*

Glad you had a great time!

Glad to see your back and that you had a good time. My husband loves driving too, but I cannot fall asleep...:)

Oh great. Now I have "Love Cyprus..the year round island" stuck in my head! Damn you CNN!!!

LOL, but glad to hear you guys had a relaxing trip! I look forward to reading more blogs and oogling pictures!

Ever since a friend of mine who worked in the State Department was stationed in Cyprus, I've always wanted to visit. I can't wait to see the rest of your pictures.

What do the people of Cyprus have against road signs? Here in the US we have a surplus. Too many signs and they start making the roads look trashy.