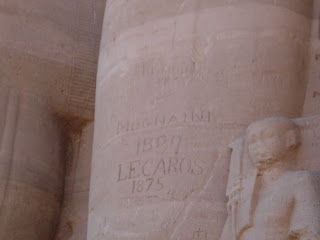 We all know that times change and with them the beliefs people hold about what is right and wrong. One of the greatest ironies of my Nile Cruise was seeing the visible evidence of how people once visited these tombs and temples and how their views on keeping these sites pristine for future generations may have been slightly different from those we hold today.

Museums and art galleries all over the world ask their patrons to either not take photos, or when that isn’t required, to at least not use a flash so that pieces that were painted hundreds of years ago will still be in good condition a hundred years from now despite the harsh florescent bulbs of the 21st century. As I learned the hard way, in Egypt this means that people must put their cameras away when viewing some of the better preserved hieroglyphics and tombs. 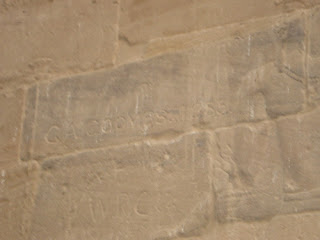 During my time on the Nile, I learned that this wasn’t always the case. Site after site, I saw people who had carved their names into the millennia old stone so that they could remain a part of history along with the Egyptian Gods these edifices sought to honor. The thought of destroying something so timeless and awe-inspiring simply boggled my mind.

Time and again, I was shown proof that these attempts to become part of history were not only the ideas of crazy foreigners who had fallen in love with the dessert. Some of the carvings were oddly professional looking – proof that someone had created a business out of carving people’s names into the walls of tombs meant to revere the likes of Ramses and Amun the Sun God. (If you can’t beat ‘em, join ‘em?)

Seeing the desecration of these ancient sites got me to wondering how people will judge us in 200 years when they see how we have treated their oceans and lands. Will they condemn us as having no respect for that which has remained here untouched and pure for millennia? Or will they see our names in the indelible deeds we have wrought and think only of what beauty we must have seen before we changed it forever?
Posted by MsTypo at 11:33 PM

I'm usually an optimist - but I have to say that I think future generations will judge us harshly for the ruin we have created...

I'm not sure why, but I'm really intrigued by the whole name carving thing. I think it adds, not detracts to the history. Don't we all want to be memorialized for all time? Not very PC of me.

That's a really interesting subject - and good points made. We've noticed the same thing while visiting many if the Native American ruins here in the states as well - people leaving drawings and names in pen and paint and carving things into the walls.

They will wonder why half the population was named Kilroy. "Who was this great man, Kilroy," they will ask, "that millions of people named their children after?"

The funny thing is that you'll find name carvings dating back to before the time of Christ as well; Greeks, Persians, etc. who came to visit the Ancient sites. "Heroditus was here!" I guess tourists will always be tourists...

Just amazing. You are so lucky to see all this!

I feel this way, too. There are some old indian ruins that my family goes to visit every couple of years and people are constantly adding their names to these amazing drawings. WHY? I also agree about the way we are leaving the earth.

I was going to say the same thing Jennifer did...since the beginning of man he has always had the desire to carve his name on stuff. There are places in the Middle East where Vikings carved there names and messages like "Rolf was here" on historical markers and buildings.

So, when I originally went to go see Constitution Hall up in Philly, we went in the off season, and so we got to see the Governor's quarters upstairs. The most entertaining part?

A piece of graffiti from 1800 that a kid put in on the stairwell, saved for posterity.

I think that to a certain extent none of history has remained truly pristine. I was mortified when I went to the British museum to find parts of the Parthenon there. It made me mad.

It always amazes me the lack of respect people have for history, and other people. I wonder if these name carvers would feel the same if someone carved or wrote their names on a loved ones grave stone?

I intensely dislike graffitti. Half the North American cities seem to be covered in it.
However, it was interesting in both Jordan and Egypt to see how old some of this graffitti actually is.
merthyrmum

What an intriguing post, and the comments as well. I personally wouldn't desecrate these treasures and wouldn't condone if done by others. And yet the commenters raise an interesting perspective.

I sometimes wonder about this as well. It makes you realize that we should live our lives to reflect what we want others to remember us by.

Interesting thoughts. Makes me wonder how differently we would all act if we thought about how people would view us not just now, but historically, too.

Those tourists people really have brass ones! I would be way too much of a pansy to even attempt to touch anything. My luck, I would touch the monument and it would crumble to a smithereens! Hope you have a great weekend :)

i dont know but i probably would have paid to have my name put there!

I should send you my "Egyptian Graffiti" picture folder. After day 2 or 3, you just go into "Pharonic overload". You can't process any more egypt, period. So I started taking pictures of the graffiti. I think I have pictures of those things, too. There's this really intricate one at the Temple of Philae, in French, that has the latitudes & longitudes carved in as well. It's really sad to see such history defiled.

I love seeing Egypt on your blog. It is beautiful. Good luck with South Beach, btw! I have been off and on it for about 4 years now. I usually go off in the fall and back on in about March. Oooo...that's coming up isn't it?

I think they will think we are arrogant.

If there will be anybody left in 200 years, they will not have a good word left for us, I bet :(
And I can't say I blame them either :(

If only we could take nothing but photographs, leave nothing but footsteps ... but I am afraid the final scene of the 1968 version of the movie Planet of the Apes comes to mind ... hhmmm
but I love your photos of the place

i can't imagine such destruction. but then I loathe grafitti in general and just really don't get what the point is in defacing property.

I fall into the group that thinks that some alterations add, rather than detract, from monuments - and I say that as an archaeology student. After all, every excavation or study destroys just as it illuminates. Sometimes that's just the way it is. However, I do think that we should preserve things as much as we can, without turning history into a sofa in the front parlour under plastic sheeting that no one every gets to sit on.