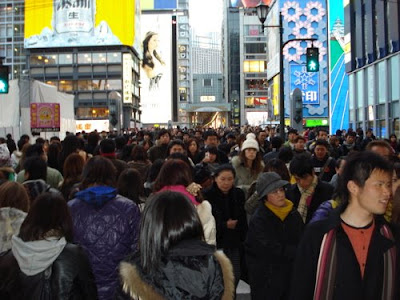 The other day Christine of Strange Pilgram invited me to join an odd meme. I was supposed to post the sixth photo from my sixth folder and then talk about it. Since we all know that I rarely if ever play by the rules, I decide to post a photo from my sixth day in Japan. Day six was our final day in Osaka and we were both very eager to board the Shinkansen the next morning for Tokyo.

To say that there are a lot of people in Japan is like saying that cab drivers in Cairo are merely crazy. Everywhere we went, regardless of the time of day, we were in the middle of a sea of people. This particular photo was taken as we crossed the street near one of the many ped malls near our hotel.

Some of you may be thinking that existing within a crowd should be old hat by now – after all, I have lived in both Delhi and Cairo which are not exactly plagued by a dearth of people. What made Japan unique, however, was how eerily orderly everyone appeared to be. Allow me to explain.

In Cairo, jaywalking is a sport in which drivers try to hit you as you walk leisurely in front of them in the middle of rush hour. I consider it a badge of honor that I no longer need a screen to cover me during these harrowing trips to the other side of Kasr el Aini. In Japan, things work a little differently. Despite the fact that there was no traffic coming in either direction, fifty people stood on either side of the street waiting for the light to change. Hubby and I looked at each other and agreed that we had arrived during an invasion of the Pod People.

Considering that over 127 million people live in Japan, the place simply reeks of law and order. There was no littering, jaywalking, or anything else I would consider part of a normal part of living in Cairo. The friendly people didn’t even want baksheesh for helping us!

We have long been taught that following the crowd will lead to our downfall but I think this is one time when the crowd may be right. Lawfulness and order are the new chaos and anarchy. And I like it.
Posted by MsTypo at 11:29 PM

And I like it too! Sounds like something to emulate. Lawfulness and order could actually minimize stress - what an interesting thought.

I love Japan...every where is clean and everyone is structured. I was very impressed with the crowd as well.

I guess with that many people a little order goes a long way!

Oh, how wonderful would that be? Waiting in a line? Do I still know how to do that? Be still my heart, only 7 weeks left till we reach the land of order! ;)

So many people!!! And to think EVERY time we travel we see huge groups of Japanese tourists, yet millions are still in Japan. That is A LOT of people!

My husband would FREAK out,if he had to walk down a street like the one in your photo! He is such a claustrophobic....
But I guess with law and order it´s manageable.

I have a lot of appreciation for Japanese culture...
So, I know you enjoy food and drink, what was your favorite nibble and beverage?

...and I worry about remembering to follow all the rules when we move back to the US!

Day 2 of the Where’s Wenda? Contest is here. Today, I am visiting all of the SITStas that commented on Hot Chocolate Caramel Mocha. That means you! Thanks so much for stopping by and for being a great SISta! -Wenda

I almost felt like I was walking the streets of Japan with you. I would love to be in a place with that much order!

I used to live in the Philippines, and we had that kind of crowds, but not as much of the order :-). THAT part I do not miss.

What a fascinating life you live!

I'm so glad that Wenda came back to your blog!! How do you find the time to chase her AND post. I'm fearful all of this sleuthing is going to come at the expense of my own blog!

Now to your photo... Will you adopt me please?! I know I'm in my 30's and all but I am so enamored of your life and adventures!!

Did you feel any anxiety when you were surrounded by so many people? I wonder if one person falls what happens? I was in Tokyo 26 years ago and even then, they crammed and shoved you in the trains.

I bet there was no pick-pocketing either!
I concur with the mad crowds in Cairo. Try crossing a road let alone walking along the road because the sidewalks are full of cars!
merthyrmum

Hey I see Wenda here, too! Just stopped by say thanks for visiting my blog...

Whoa! That is crazyyyy!! I hate crowds too. Eek!

Thanks for coming by and visiting me! =D

Stopping by from SITS to say hi! If you're looking for Wenda, you might be able to find her over in my little corner of bloggyland! =)

What an amazing picture! The enormous crowd frightens me a bit, but I love the look of the buildings and everything in the background.

I always set up the cable first thing too! Usually schedule it for the day we're actually moving in :)

Wow - that is quite the impressive crowd!

I'm not a big crowd person myself. Oh, by the way, did you know that WENDA is stalking you!?

My husband and I are dying to visit Japan. And I'm green with envy reading all your posts!

Hope you've enjoyed your time there.

In Boston, the cattle... I mean pedestrians, seem to feel that the sheer size of their crowd wills the cars to stop.

Hiya from SITS! Wow - I loved Japan. Went to Tokyo and Osaka years back with my family and I loved it! The Japanese are super quirky and fun, oh and the fashion?!? I love.

You made me long to go back there soon! Haha!

that is just amazing! i can't imagine being in the midst of so many people. i imagine it has to be orderly to survive the chaos.

I was particularly entranced by the fact that there were men whose job it was to keep the bicycles orderly - they'd come along and line them all up and move them closer together about once an hour (I spent an afternoon in Starbucks gazing out during my trip, which is how I noticed it.)

This is what I thought it was going to be like living in Korea, all the time. I was really surprised when it wasn't crazy crowded all the time. In fact, most of the time I don't feel like it's very crowded here at all - save riding the subway at peak hours, or being in a popular shopping spot on the weekend or something.

I think, I stay in Hungary.
I hate crowds :(

I love crowds! It fun to mess with people and get accidental gropes now and again lol. But seriously I think you get cained for jay walking in japan.