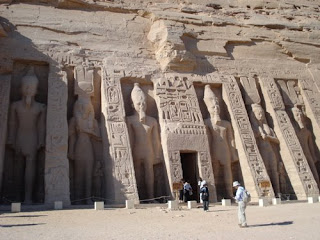 The biggest problem with going on a Nile Cruise (with or without one’s parents) is that you are essentially visiting a museum for 5 days. Don’t get me wrong: Egypt has some of the coolest “old stuff” in the world, and seeing Karnak and Philae was an incredible experience I wouldn’t trade for anything. That said, around day 3.5 you realize that virtually all the temples have very similar hieroglyphics and you keep seeing the same tourists at every ancient temple, tomb, and obelisk.

I took well over 600 photos during those few days so obviously I wasn’t having too bad of a time. That said, when we finished up our day of touring in Aswan, I was well and truly ready to head back to a city where the oldest things were the pyramids of Giza 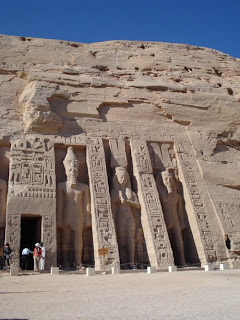 and those were a 30LE taxi ride away! (You have to put these things into perspective when you live in the middle of the world’s largest museum, also known as Egypt.)

On the fifth and final morning of our cruise, my parents and I still had one last tour to complete – the three-hour drive (each way) to Abu Simbel. Since the famous site is located only a short distance from the Sudanese border, we had to drive down as part of a convoy of about 10-15 cars and buses.

With an armed guard in our car, we set off on a three-hour race. The entire point of being a driver in this convoy appeared to be to pass the cars in front of you at the highest rate of speed you could achieve. We made it in less than 2.5 hours. Go us!

Keep in mind that by the time we arrived in Abu Simbel, I didn’t care that we had an incredibly knowledgeable and personable guide. I was sick of seeing things that counted their age in millennia and just wanted to get home to my comfy bed and centuries old neighborhood. As we walked past the beautiful Lake Nasr, this was the first thing I saw: 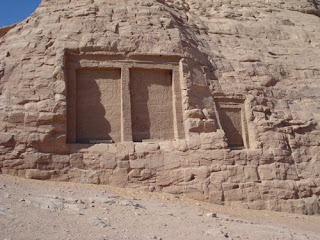 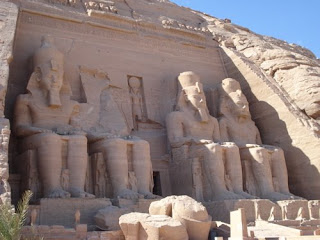 With my mouth literally hanging agape, my first reaction was, and I quote, “Holy crap!” Aren’t I eloquent? 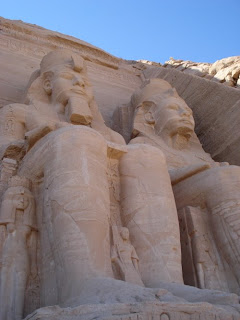 The giant statues towered above me and were suddenly the most impressive things I had seen in all of Egypt. Built by Ramses II in the 13th century BC, the temple is a brilliant work of art, craftsmanship, and engineering. We’ve already discussed how you can’t take photos inside the temples, so you’ll have to bear with me as I describe one of the most amazing “effects” at Abu Simbel.

At the very back of the temple is a relief carving of three gods and Ramses himself (how’s that for hubris and ego). The god to the far left is the god of the underworld. Now for the cool part: the temple was constructed and positioned in such a way that twice a year light fills the entry way and three of the four “gods” are illuminated. The one that isn’t? Mr. Underworld himself, Ptah. The days, for those of you who are interested are Ramses’s birthday and the date of his coronation. Take that, engineering majors of the 21st century! 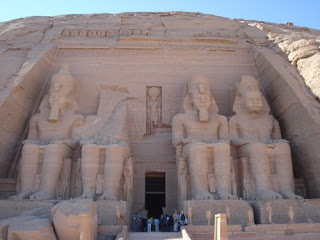 Right next door to Ramses’s temple is the one he built for his wife Nefertari. (These are the photos at the top of today’s post.) Although still incredibly impressive, Nefertari’s tomb suffers from “sloppy seconds” syndrome. Much like having to go on stage after Robin Williams has “warmed” up the audience, Nefertari’s tomb is smaller and less impressive than her husband’s when seen in succession.

Abu Simbel is not always included in people’s regular itinerary when they visit Egypt. We had to arrange for a separate tour that was more than worth the money. Next time you’re in the neighborhood, I must insist that you spend the extra day (and it will take an entire day) to visit this amazing UNESCO World Heritage Site.
Posted by MsTypo at 11:18 PM

I so so want to go there! Inshallah when the girls get older!

You made me chortle, with the spending 5 days visiting a museum thing and the wanting to be somewhere where they counted age in centuries not millenia...

But seriously, I did the Nile Cruise with friends last August and I've been pining after it since and plotting another visit this year and shoving it down everybody's throat. To be fair, I think I'll send them this way to get a somewhat different take before they make the commitment.

Amazing pics! My husband wants to do the nile cruise so bad. I am just afraid of going inside those places since I am claustrophobic!

I'm going to have to show this to hubby. He's been an Ancient history, languages and Old Testament professor for over 30 years! These are stunning shots! You are one lucky gal to be wandering the world!

What fantastic pictures! But I must admit, the idea of a 3 hour car/bus convoy ride makes me want to reach for my endless supply of Dramamine. Motion sickness is no fun! lol

Very cool! The pics are amazing!

Wow - did I really get a comment all the way from Cairo? You really ARE livin' the dream! Can I be an adopted family or friend? You know - the kind who gets to come visit you?

I know what you mean about being all museum'd out! After living in China, I was templed out - never wanted to see another of these masterpieces again ... well, for a long time anyway.

600 pictures. . sometimes we just can't stop ourselves! But I am glad we get to see some of them

I'm so with you. DH and I felt the same way after our upper Egypt trip- templed out. Now that we're in India, we've got a similar syndrome: fort fatigue!

***psst- don't tell anyone, but i think we prefer egypt to india. would love to go back someday.

I believe that you also had in your car on the way to Abu Simbel not only an armed guard but two drivers (one for each direction)and the guide!
These statues are truly massive and well worth the extra drive through the desert--although you can take a short cut and go by air but then you would miss that real "ahha" moment when you walk around the corner from Lake Nasr(which is also awesome).
merthyrmum

You really amaze me. You and your hubby are doing what most people can only dream of. Someday I will visit all these wonderful places. Until then I will just see them through you:)

I really really enjoy you sharing this with all of us who will probably never get to have such experiences....it's so awesome!

Reading your blog really get me itching to book an airticket... to ANYWHERE! :)

If it weren't for your blog, I wouldn't even know that Nile cruises existed. Now back to my life where we count things in decades.

This is stuff that I have only heard of in school. And here I am writing with a person who´s seen it all and can make it all come to life!
Thanks for that!

I have to agree, 5 days feeling like you are in a museum may be too much. BUT to still feel amazed on the last day . . . those must be SOME statues!!

Wow. Obviously, everything you wrote is intriguing. The pictures are magnificent.

Would you consider doing a post on your experiences with personal safety? You mentioned the armed guard. WHat do you do to make sure you don't put yourself in compromising situations -- whether it be traveling to tourist spot or even around town? I've heard Cairo can be dangerous, but then I wonder if that's just a stereotypical response (since most haven't been there...)?

Man! I'm getting to Cario in a few weeks but circumstances won't allow for any other travel. Now I'm a little bitter. Cuz I really do hope our time here in the ME will allow me some time to see this!

I'm dying to go to Egypt. Did you ever read Elizabeth Peters' Egyptian mysteries?

I think 'holy crap' sums it up nicely. They are huge! So awesome that you're getting to experience all this!!!

oh wow - those pictures are just breathtaking. beautiful and amazing, since I will probably never make it there.

That sounds like a great tour!
I know it can be taxing, but at least you have something great to remember!

Wow! Something I have only seen in ancient history books! Fantastic photos ... majestic! thank you

its like i was there with you, just minus the heat, sand, and funny smells.