Give My Regards Broadway 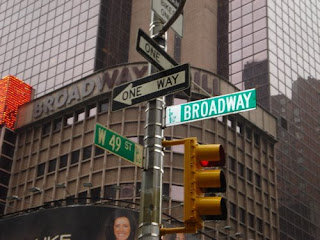 I am the original Broadway baby. I grew up watching musicals and have been known to break out into song at the least provocation. So you can imagine how excited I was when I first stepped foot on the real Broadway, looked up and down the street, and saw all the theatres where I once foresaw myself treading the boards.

My plans of world domination through drama may have fallen short but that didn’t mean that I was going to miss out on my chance to see a musical on Broadway. That, of course, left me with the dilemma of what to see. After much hemming and hawing, I narrowed it down to Wicked and Guys and Dolls starring Mama Gilmore, Lauren Graham. 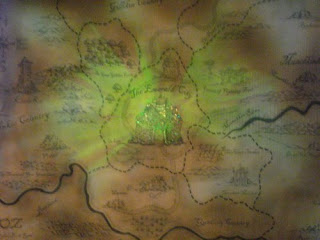 The deciding factor was finally that I know every single song from G&D by heart and wasn’t as familiar with Wicked.

I booked my ticket while I was still in Toronto and could only hope that my seat 118S would have good site lines. The online theater map of the Gershwin made it look like my seat would be good but I was still anxious since this was my big Broadway splurge. In the end, my seat was almost dead centre and at good distance from the stage.

There is something about live theatre that makes my skin feel electric. After giving my ticket to the guy at the door I stood and stared at the stage with the large dragon sitting atop it and had to physically restrain myself from breaking out into the few 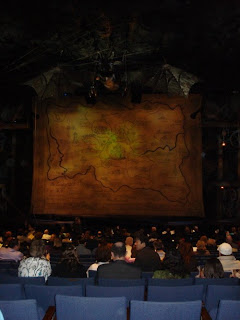 lines of song I knew thanks to Kat at Sunshine and Lemonade.

The title of today’s post was going to be “Simply Wicked” because that’s what it was – wicked awesome! I loved the seamless way the traditional story of the Wizard of Oz was woven into the plot and left you thinking, “Oh, now that makes sense! Of course she wanted the shoes back!”

From the music to the sets to the performances themselves, the entire night was 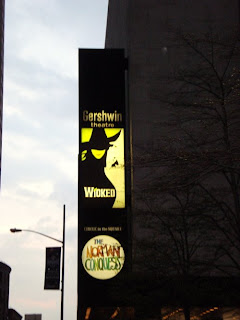 magical. I used to attend live theatre quite frequently but must admit that seeing Wicked on Broadway somehow made it even more special. A number of obvious fans were wearing green in honour of the musical’s heroine, and I was able to see several people mouthing along with the players during several songs.

(And now for the cheesy final number…) Wicked absolutely defied my expectations and deserves to be as popular it is. When the lights eventually go dark on this masterpiece, I won’t be the only one mourning the Wicked.
Posted by MsTypo at 12:06 AM

My daughter is a theatre person. For her high school graduation present she wanted a family trip to NYC. And we saw Wicked (her pick). It was amazing.

I have been a sucky commenter lately. But...today after being woken up by my children at the ungodly hour of 7:30...I thought I would read some blogs. And there is me...getting the ultimate wicked shout out :-)

How very cool that you saw it on Broadway. I LOVED the way they adapted Maguire's story...and the music is just incredible. And your whole trip...I am trying not to turn Elphaba green :-)

Maybe we can go together one of these days...wicked eh?
merthyrmum

Just so happens, my oldest girls and I have plans to do that this summer. The are addicted to Wicked. The only thing I mourn right now is that Kristin Chenoweth and Idina Menzel are not starring. :'( But I don't think that will stop the girls and me from going!

I just saw this here in Utah and I can't agree more! I. Loved. It.

I am wickedly obsessed with it (there's some cheesiness for ya) You can find me singing at the top of my lungs anytime I put the cd in. I just bought the piano sheet music and can't wait to get it in the mail!

I too will be mourning the Wicked.

Oh, what cast did you see? Who played Elphaba, Glinda, Fiyero etc.??

Wow, I guess I'm an outlier. I saw "Wicked" in London 2 months ago and I actually dozed through most of the first act. Don't get me wrong, the cast was excellent, the production was expensive, and everything went fine. I just didn't feel engaged in the musical. I did, however, read the book last year and I couldn't put it down. Is it just me or is the ending of the musical different (and cheesier) than the book?

I've wanted to see this for so long, my husband absolutely refuses to go. I think I'll go by myself if it ever comes back to my neck of the woods.