When we travel abroad, Hubby and I usually rent a car or hoof it everywhere. Oslo, being a walking town, was definitely a case of the latter. That’s probably why it is so odd that we became so obsessed with transportation while we were there.

We took the train from the airport into town and a bus back out on Sunday. While we ate lunch on our final day, we enjoyed a mini parade of classic cars driving through town. And on the day we arrived, we caught the tail end of an actual parade complete with a marching band and two mounted policemen keeping up the rear. 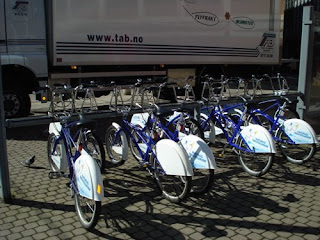 Yet with all these planes, trains, and automobiles, my favourite discovery was the rental bicycles. Throughout town, we kept seeing people pick up and drop off bicycles at random bike racks with seeming little care to security. It turns out that these were rental bikes.

After swiping a card, a person is allowed to borrow a bike and return it to any of the designated racks anywhere in town. I don’t know how much the bikes cost to rent but I was fascinated by this brilliant scheme as soon as Hubby told me the details. 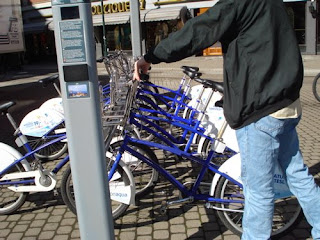 It turns out that they have these popular, eco-friendly rental vehicles in many European cities including Vienna where Hubby traveled last month. I don’t understand why more North American cities haven’t taken this up as being both a healthy alternative to driving, and an eco-friendly way of navigating the city.

Before anyone asks, I never got around to renting a bike myself because I didn’t know where to buy a card. More importantly, though, do you have any idea how long it’s been since I rode a bike? I’m not sure I remember how! *eek*
Posted by MsTypo at 11:13 PM

I noticed rental bikes in Montreal the other day. I think it's a great idea but there are no decent biking baths in downtown.

We have the rental bike system in Stockholm too. It's a genius idea! Every big city should have it...

That's one beautiful oldtimer!
And I've heard about the bikes from a friend in Paris.
I thought it pretty cool as well :)

We have these too in the city where I live; they are called "city bikes" and are very popular.;))

Paris was the first place I saw the bike rentals. They had them in Toronto but I don't know if they still exist. Could you imagine trying to get around the city streets on a bike?
And yes, I do remember you learning--I think we have the photo--I also have one of me learning. Can you imagine how long ago that was? Me learning that is. :)
merthyrmum

What a great idea for us here too. I hope it catches on all over the world!

Have you been to Amsterdam? I saw a lot once where people could park their bikes and there were thousands!

I just love your blog, thanks for visiting me from Sits.
Your a very good writer. I follow you now..
oh, can I come travel with you?
as soon as I shed the weight, perhaps you can just shove me into the carry on.
Cheers
Brittany
I love the Viking boats below.
http://www.papermoonies.blogspot.com

Those bikes look like so much fun! I wish NYC would rent bikes to everyone instead of cars but knowing New Yorkers there would still be road rage and crazy traffic! lol

First, I want to say that I just loooove your blog! I love travel, and your pictures and posts are bringing back such beautiful memories - and inspiring me to plan more trips! :-)

Thank you for visiting my blog yesterday! Otherwise, I wouldn't have known your blog existed! I am proudly following you!

That's such a cool idea! I wish we could do that here! SA is one of the fattest cities in Texas for a reason...

Though that old car is pretty sweet. :)

That is such a cool idea. You're right more cities should do this. I have a bike at home tha tI should ride more often.

I just bought a bike about 2 weeks ago. And amazingly, you do remember! I think it'd been at least 13-14 years since I last rode one regularly. I will take pictures and post. Soon.

Neat! I really want to go to Norway someday - was it super expensive like I have heard?

When I did my big European vacation 10 years ago (how did ten years pass?), there were free bikes in Copenhagen and in at this art museum that was in the middle of a park. Can't recall the name.

This is a brilliant concept -- rental bikes. I don't know why we don't do this sort of thing in the US... sigh...

I love the idea of rental bikes!

found you on SITS and thought I'd stop by to say hello and check out your blog!

I love this.
Madison, WI had a bike BORROWING program that was similarly brilliant.
The city police had all the lost & stolen bicycles painted a hideous yellow-green and spread them around the city.
They could be used by anyone and left anywhere. They were easily identifiable and no one was tempted to take permanant ownership because even the TIRES were painted that horrible color.