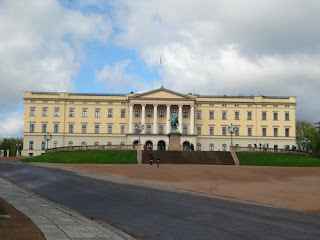 When Hubby heard the date I was coming home, his first reaction wasn’t to jump with joy. Since I had expected a parade of 76 trombones when I told him about my imminent arrival, I very politely asked him what the problem was and waited to hear that the brass section was late but on their way. Instead, Hubby broke the news that he had several business trips lined up that he couldn’t get out of scheduled very close to my return.

Luckily for me, I married not only a brilliant man but also a generous one. His solution to our abruptly interrupted reunion was to invite me along on his trip to Oslo, Norway. Since the hotel and his ticket were already paid for, one extra little plane ticket wasn’t much compared to marital bliss. 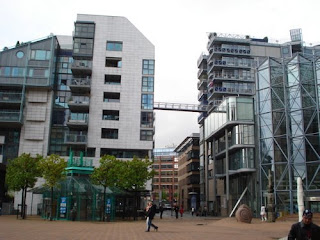 The architecture in Oslo is a fantastic blend of the new and the old. We were there for only a handful of days but I am officially ready to move and become Norwegian. I’ve even picked out the location for my future condo right in the waterfront area Aker Brygge. I was so enamored of the bustling area I even begged Hubby to pick up real estate brochures!

Hubby and I walked from one end of the city to the other, ducking into cafes when it rained and bars when we thought it might. Between bevies, we would people watch and I must admit that Norwegians appear to be incredibly fit as a whole and my rather round self stood out. 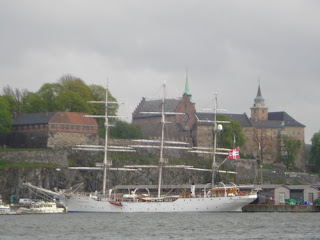 The only potential downfall to life in Norway is the price of food. We visited both restaurants and supermarkets and came away with two distinct impressions. First, wow food costs a lot here. And, perhaps more importantly, the quality of that food was amazing! Whether it was fresh veggies in the produce section or a pizza along the Aker Brygge, the quality of the (admittedly pricey) food was phenomenal. Oslo is also home of the $11 pint of beer (for the cheap stuff!).

I realize that I’m acting like a teenager dealing with her first crush but Oslo was a great city and I haven’t even mentioned two of my favourite things. One was kitschy and the other was weird yet cool. Check back in tomorrow for more of me gushing on Oslo and I’ll tell you all about the first of my new Norwegian loves.
Posted by MsTypo at 11:49 PM

I wonder why food is so expensive there? When I go to Hawaii I know it's because everything (almost) has to travel by container ship to get there ... but Norway? I'm left wondering ....

I agree - Norway is fabulous and beautiful.. and so very very expensive...

You have one great husband :D!
And I'm glad you could see Norway and Oslo.
I loved Oslo!!

Your husband is truly a wonderful man; imagine, I have never been to Norway, although I live in Scandinavia.;) I guess one never travels in one own neighborhood.;) But I think I will have to make plan for a visit soon:;))

i would love to visit europe one day. and...i think i have norwegian ancestors!

And that is why a lot of Norwegians take the ferry from Oslo to Denmark and then get smashed....cheap beer!

I so want your life right now...being able to travel so often. Sigh...

So it wasn't cheap but the memories... priceless, no?

I haven't been out that way yet. But it's on the list.. AFTER I come visit Egypt ofcourse.. he he

Visiting from SITS! I have never been to Norway, but I hope to make it someday!! Sounds like it is worth the trip...

Have not been to Norway and also wonder about the extreme prices you witnessed. Can understand when everything is shipping in but...?

What was the weather like--rain for cafes and 'maybe' for pubs? I like that!
Looks great :)
merthyrmum

thanks for stopping by my page..you'll have to tell me about cairo, i have dreamed of going to egypt since i was a child, and now i am a bellydancer so i am even more interested

I think I love your husband. You don't mind, do you? Now, hurry up, tomorrow, so I can read the rest of the story.

I bet it was super clean compared to Cairo too? Am I right? I know the feeling of wanting to move somewhere when you fall in love with the place. Happens to me quite often. I'd like to move to the Maldives part-time, even though I've only seen photos of it.

I've never been but you're making it sound pretty good! I can't wait to see what you've got up your sleeve for tomorrow...

I hope next time you come this way you will look me up! (serious) I am so glad you had a great time! I would love to tell you I have lost weight after moving to this crazy expensive country...I haven't

Awesome that you got to go on the trip with your hubby. Glad you enjoyed. I love that you came by my blog again. Thanks for commenting.

That sounds like a really fun place! I've never even thought about going to Oslo, but now it's on my radar should I ever get to Europe!

Maybe if you move there the "paychecks" will be bigger too. Somehow the people there manage to cope, right? :)
Sounds intriguing, can´t wait to read more tomorrow!

Maybe one of the reasons people are super fit there is BECAUSE the food is so expensive. They can't afford to over eat.