Not Quite the EU 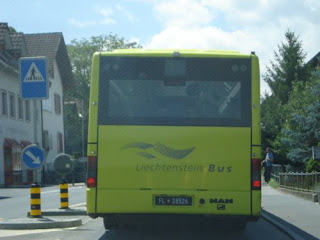 One of the many themes of this vacation was less a theme and more of a weather condition: rain. It rained in almost every country we visited for almost our entire trip. Sure there were brief moments of dryness and blue skies but for the most part we wished we had packed – or even owned – umbrellas. The two notable exceptions to this rule were Liechtenstein and Switzerland. What do these two countries have in common that make them different from the rest of the European nations we stopped in? They aren’t part of the EU.

Before too many days had passed, I was fairly certain that joining the European Union required agreeing to have a weather machine filled with rain situated permanently 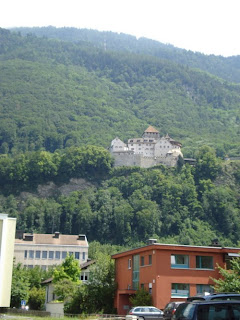 above your nation. I was incredibly grateful, as you can imagine, to escape this European weather menace during our drive from Austria through Liechtenstein and into Switzerland.

Liechtenstein is a dot of a country that could have taken us less than an hour to drive through. Instead we opted to stop in Vaduz for some castle hunting and lunch. Vaduz Castle is perched atop a steep hill above the capital and can be seen from almost everywhere in town. Not bad digs if you happen to be local royalty in this monarchical country.

Our initial plans included having lunch at Restaurant Torkel overlooking the Prince’s own vineyards. Sadly, for reasons we couldn’t fathom, their last seating for lunch was at 1:00 p.m. and we were turned away at the door. They were, however, nice enough to give us a token so we could get out of their parking lot without any problems. 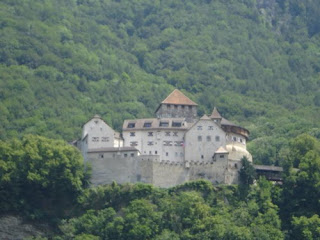 By now, we were frustrated and had low blood sugar to boot so we decided to dine in town at one of the many open-air restaurants that dotted the pedestrian mall. Given the array of food choices we saw there, I can only assume that Italian food (specifically pizza) is the traditional food of Liechtenstein. I shouldn’t complain, though, since it was a very tasty pepperoni pie.

Although there was definitely modern architecture present in Liechtenstein, the country seemed locked in an older, simpler time. Perhaps I’m romanticizing the place a little but it really did seem idyllic and peaceful. When Hubby and I become billionaires, I definitely foresee us purchasing one of our summer homes here. Maybe next door to the castle…
Posted by MsTypo at 12:33 AM

Sounds like a fairy tale country. You are traveling my dream trip. I love each addition!

A cute little country, I'd say. And I think I'm one of the few who doesn't mind rain...great sleeping weather!

I have visited Lichtenstein and that particular castle as well; but guess what - it rained the whole day we were there.;) Hehe.;)
xo

Also, I wanted to add that I really enjoy seeing Europe through your eyes.;) It is refreshing.;)

I am glad that the rain didn't dampen your trip! What a gorgeous castle!!

A great fairytale casle! Which Disney movie used it as a setting...?
merthyrmum

Haven't been to Lichtenstein so thanks for this photo journey; can't wait to see where else you've been and what you saw along the way.

I am really enjoying the travelogue.
As I have been a tad busy, I have been getting a couple of posts at a time, which is really nice. Friends have just returned from a river tour Budapest - Amsterdam and I think they are castled out, but I get to enjoy their photos/stories next weekend.

Us too on our European trip--RAIN!! But not in Switzerland- loved it there!

Ah, Sir Ulrich Von Lichtenstein. Name the movie.
This just makes me antsy to visit my parents in Germany. And you know where I had the best Quattro Formaggio pizza ever? Luxor. We have a wonderful hotel on the Nile that we always stay at and it has a little Italian restaurant on the premises for guests. Not overpriced, too much. 40 LE for a pizza to stuff both hubby & me.

You should link one of your travel posts up tomorrow - I host a Thursday virutal travel blog party. I think everyone would love this.

Save a lot for me next to the castle so I can move away from these neighbors!

I could totally live in a castle. But I would not be amused by low blood sugar or rain!

Looks like such a fun place to visit. Sorry that you hit so much rain! But there is certain romance to seeing countries in the rain. . .

It's absolutely beautiful! I think that sometimes inclement weather adds to the experience. Rainy England was a good example for me.. it was often wet when we explored and for some reason, it makes my memory of the time even more clear.

That's the beauty of this country; romantic castles and yummy pizza. Oh, and no rain. Mental note: Must visit Liechtenstein. :-)

Dig a bit deeper hon, hell often lurks just under the surface of paradise... Norway is not part of the Union either, though it is part of the EEA! BB.

I love visiting castles...But I wouldn't want to live in one though.

Always fun to do things like that -- and the changes in plan always add to the memories later. But ummm why didn't you buy an umbrella at some point? You're braver than I am!

Thank you for visiting me on my SITS Day!

What a neat blog! Glad I found it! Love the castle. Bet it's not comfortable to live in though. Also relieved to hear rain is constant everywhere -- we are in the south and it's not usual this time of year. I am thinking of building an ark. We have a wild mustang sanctuary and the mustangs are from Nevada, NOT used to this weather......

Big grin at the Pizza thing ;)
Yepp, Restaurants have the oddest opening hours in Europe.
Did you know, I've never been in Liechtenstein?
;)
Sounds nice enough though. We must try it one day :)

Yeah, we even organize our breakfast, lunches and dinners neatly at the 'right time'. My American friends complained that they almost starved until they realized they had to get hungry 'at proper times'...haha... you write wonderfully.

BTW, I grew up just an hour drive away from Vaduz - between Landquart and Klosters.