Where the Drunk Things Are 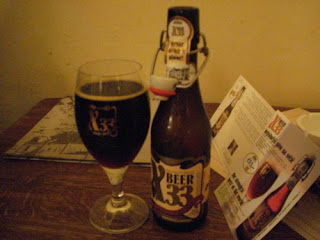 I will post about the many incredible castles, churches, and buildings we saw in the Czech Republic later, but it would be remiss of me to not start out this tour of our favorite European stop without talking about the drunken haze in which we wandered through this city. Our itinerary only allowed for one day in most of the cities we visited but since we arrived in Prague (or Praha as the locals call it) on the weekend and everything in Europe is closed on Sundays, we opted an extra day here.

We arrived at our fairly central hotel unexpectedly early thanks to my amazing Map Girl skills (and not at all thanks to blind luck) and immediately set out to find some of the bars we had heard so much about. I will admit here that we were not expecting to like (let alone love) Prague as we had heard so much prior good press and word of mouth that we assumed it was being over hyped. We. Were. Wrong. 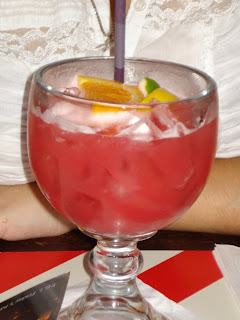 We started our Drunken Haze Tour of Prague at a bar Hubby read about that boasted serving the strongest beer in the world. Ever willing to dive into a new mug beer, Hubby was keen to order the 11.8% alcohol content X-Beer at U Medvidku in Old Town Prague. Since I didn’t want to be left behind, I ordered the ice cream version of this surprisingly sweet beer. I’m not sure if I would run out and buy a case of either the beer or the ice cream but it was a fun way to start what would be a great evening.

We wandered around Old Town popping into shops and reading restaurant menus in search of food. I refuse to reveal the identity of the embarrassingly American restaurant we eventually ended up at but what followed is definitely worthy of blogging. While we were waiting for our meals to arrive, I finished one giant Margarita, during the meal I drank another, I think there was a pink thing somewhere in there, and then we decided to have shots.

I’m not a shot girl under the best of circumstances but when we were offered a taste of the local liqueur Becherovka we knew it be impolite to refuse. My first thought was, “This smells like Christmas!” With the gingerbread scent wafting around me, I leaned back and slammed the contents of the small glass. Tasty! 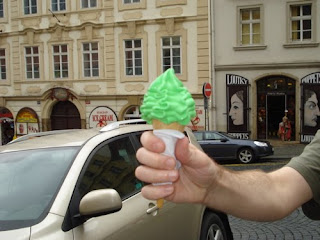 Our livers fared no better on Sunday than they did on Saturday. Between meals and tourist spots, we enjoyed a glass or two of wine and even an absinthe ice cream cone! (Yum!) The highlight of our drunken tour of Prague was Les Moules – a restaurant whose menu features a kilogram of mussels prepared just about any way you’d like. I would tell you how good the mussels were but yummy is too tame a word.

The reason this restaurant makes it to the drunken blog post is their highly impressive collection of beers on tap. As I’ve mentioned before, I don’t like beer. I do, however, adore cider. Since Les Moules didn’t have any cider (a mortal bar sin in my book) our waiter advised that I try their apple beer. “Beer?” I cringed. Hubby encouraged me to give it a chance and promised to drink it if I didn’t like it. I can’t recall if I had four or five pints but either way I think it’s safe to say that the beer was vaguely drinkable.

That night, the night before we had to hit the road for Poland, we stumbled back to our hotel on the subway. Hubby still remembers very little of this trip but I have vivid memories of our bedside clock reading 8:30 p.m. Yes, dearest Readers, we managed to get ridiculously sloshed and pass out before most families had even sat down for dinner. We’re talented that way!
Posted by MsTypo at 11:46 PM

Oh, I loved Praha. Such a beautiful city. Wish I could go back.

Ah, thank you for sharing a tale of city of MY roots from such a different point of view.;) I love Czech beer, hey it is in my genes.;) And Becherovka is my prefered *shot* when I feel a bit off, it contains herbs that heals any sore throat. I swear You are right, it does have a x-mas spirit to it though.;)
That ice.cream is a pistachio taste, right?;) My favorite; I recall my grandfather buying it for us when we were kids, in a small shop on The Lesser Side.;) It is not there anymore today...
xoxo

Don't like beer either, but love the way you and hubby "sloshed" your way to all the famous bars!

Cairo TypO, what a fun story! I loved Prague too; the old city is gorgeous. Only spent a few days there myself. I understand it's quite a party town for young Brits who come over for weekends on cheap flights.

I'm amazed you could still type a straight post after your liquid weekend!

Oh, the places you go! And the "things" that you drink!
So fun to be young. :)
merthyrmum

Definitely my kind of trip!! It's a beautiful thing when you are somewhere that you can walk to all the restaurants and bars. Paul and I are not beer drinkers either but I intend to try a few German beers on our trip there. We do, however, love German wine so we'll find something to our liking, I'm sure.

Your post made me realize that we will defintely have to put the Czech Rep on the to do to list.

I've never had a shot in my life but that one you had with the gingerbread scent does sound good. I could drink Christmas!

Thanks for stopping by my little area of the world.

Sounds like a great time. I've never been outside of the US...someday.

Europeans in general have a different view of alcohol, don't they? They aren't as uptight about it as we Westerners are.

Ooh, that absinthe ice cream . . . didn't know they made that!

I'm looking forward to the pictures. Have a nice day.

What a funny story. You make me want to start drinking beer! And I really need to try that absinthe ice cream!

We were saving our money to see Prague (until we had to buy a house)... Now we should start saving again, cause what could be better than all that beer?

I love Prague, I didn't have the opportunity to travel there ,though.
Sounds you had a really great time!!.
A whole Margaritta? Wow, i love pizza.
xx

Fun.
Visiting from SITS. Have a great day.
www.tuesdaysattonyas.blogspot.com

I think it's appropriate to say "Cheers!" rather than Hooray!

We tend not to keep much alcohol in the house. We don't drink it much. A bit of wine here or there. Some iced drinks in summer. When it is inconvenient to buy it, we tend to not have anything. Sad when I want it though! We've been watching a series with many scenes at a local bar.. reminds me I haven't had a good beer in ages! And here you go, reminding me again. I guess we ought to pick some up :D Talked me into it!

I don't drink beer either, more of a wine girl myself. Although I recently attented a beer pairing cooking class that made me appreciate beer more. But not enough to drink it more lol!

Ahahahhaaaa! 8:30 PM? I think it's safe to say that you two don't waste time when it comes to imbibing while on vacation! ;-)

Great adventures!!! I look forward to drinking my way through Europe.

I'm still stuck on the ice cream beer. Seriously? Then again, you're like me and don't like beer so maybe it's good? The apple beer sounds worth a shot though. I love my cider!

That green ice cream is funky.

My sister tried a stout beer at lunch the other day that was over 9%. That X-beer sounds like some crazy stuff!

Snicker, sounds totally familiar.
Hubby and I manage that quite often too.
I guess it would be fair to say that we would make excellent travel companions ;)

Ummm love, you might want to Photoshop out the red and white table cloth of the embarrassingly American chain restaurant ;)

Ha! The first time I went out to dinner in London was at the same chain. We were mortified.

Ya know, I once heard (from a travel show on TV, maybe Rick Steves) that the Czechs drink more than any other country in the world. Being a girl who is 50% Czech, I am oddly proud of this!