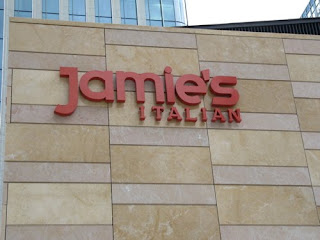 We left Fifteen feeling decidedly underwhelmed by the experience. It certainly wasn’t the first time we had ever eaten a disappointing restaurant meal but we had both held such high hopes and expectations for a place run by Jamie Oliver. We had plans to do some Real World shopping while we were in London but had not yet determined where to go. “As long as there are good pubs nearby,” was our mantra as we attempted to narrow down a location.

Never let it be said that I don’t have an awesome husband who loves and spoils me. Hubby knew how down I was about our meal and went out of his way to cheer me up. After a little research on the Internet, he discovered that Jamie had recently opened the first London branch of his chain of Italian restaurants. Located in Canary Wharf, Jamie’s Italian would, he promised, give us an opportunity to give Jamie a second chance and still leave us with plenty of time for shopping. 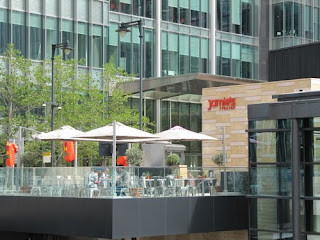 The differences between our first experience and our latest started at the front door. Jamie’s Italian is a laid back place that doesn’t take reservations. The warehouse-like space was bright and airy with large windows along the back wall. The room boasted innumerable tables but we didn’t feel crowded in or rushed during our meal. Admittedly, this was not a five-star dining experience and the space was meant to reflect the casual atmosphere Jamie wished to convey.

The staff too was a contrast: instead of cold automatons, we had upbeat waiters and waitresses with personalities who genuinely seemed to like their jobs. As at Fifteen, they were well trained and familiar with the menu and its myriad of choices.

We kicked off lunch with a selection of “artisan” breads and dish of olive oil, both of which there was a charge for. As a great lover of bread, Hubby did not begrudge the cost of the bread and inhaled it, pausing only to express his delight at the crusty offerings in the basket. I ordered a side salad of tomatoes and mozzarella to start and was quite pleased with the freshness of the flavours.

We both chose to have pasta for our main courses. Hubby’s sausage pappardelle was a delightful romp of flavours on his taste buds. The fresh homemade pasta was perfectly cooked and the flavors in the ragu were expertly combined. My bucatini carbonara was light without being too creamy and fresh thyme added a unique twist on this old favourite.

By now, our faith in Jamie had been restored and we were determined to order dessert even though this was far more food than we normally ate for lunch. Unsurprisingly, Hubby ordered a selection of sorbets. He declared each of the flavours tastily authentic and homemade. I enjoyed the Italian Bakewell Tart – a flavorsome slice of almond cake topped with crème fraîche.

Jamie’s Italian was not only a better dining experience than his more upscale Fifteen, it was also far less expensive. We enjoyed three courses each plus a soda and a glass of wine for Hubby for less than even one of our meals cost at Fifteen. This was definitely one time where price was not a sign of quality. More importantly for me, however, was that Jamie’s Italian renewed my faith in the British chef I had adored for so many years.
Posted by MsTypo at 10:11 PM

I'm enjoying your tour of fine food and love seeing and reading about all the good things you eat!

i'm sure jamie would be very happy to read this post! the food looks amazing

Glad you had a good experience after!

Hooray! I'm so glad you had a good Jamie experience. Your hubby is a keeper. ;-)

oh, that's great to hear, after your previous disappointment. i also envy you your husband. ;)

I have to go to bed now as you've made me most hungry for tomatoes and mozaarella. The entire meal looks incredible.

Thank goodness your faith was restored in Jamie! I do admire him for all the hard work he has done in bringing real food into British schools!

So sorry to read about your boring experience in his posher restaurant.

This looks divine! Love your site found it through Permission to Unwind!

Happy to hear that Jamie managed to redeem himself.;)
You take great pictures of your meals, I find it to be so difficult to take good photograph in restaurants.;)
Thank you for the very kid comment on my post yesterday, it meant a lot.;)
xo
Zuzana

okay, NOW I'm hungry! Thanks for the tastebud tease, sitsta!

I'm near you today on the SITS Roll Call...certainly enjoying your gastronomic tour!

I am so glad that you had a better experience this time:-)

I had to walk away from this post and fetch lunch. It all looks and ...reads?...so delicious!

It's interesting that often the more basic restaurants are better than their fine dining counterparts. The meal sounded delicious and the pictures made me hungry. I'm so glad you have such a wonderful husband who found this place for you.

Redemption for Jamie! But if you have a big name and a big following you should have big standards everywhere.
merthyrmum

I can imagine how empty you felt with your disappointing trip to Jaime's but am so glad you found a place that you enjoyed!

Jamie's Italian sound so much more in tune with the style of cooking and eating he conveys in his cookbooks. Maybe that's why it was so much better?

If those pictures had been biggger I might have licked my computer screen. Thank goodness for small pictures.

Delicious! I love it when things work out so well. :)

I'm not coming back to your blog until my diet is over!

Yay for second chances! Now is the food blogging done? I have been craving unobtainable foods for the past week! There isn't much diversity in Idaho, gastronomically speaking. Export me, now!

I love Jamie! Hopefully I will be able to try that restaurant out one day. It sounds like a fun place!

Agh! Too many food posts this morning! I'm hungry!

Anyway, sorry about that. So glad Jamie got the chance to redeem himself!

Are Jamie's restaurants in other parts of the world? I love the price and delicious seafood restaurants in Naples, Florida. What a nice surprise after the cost, and less fresh fish in California.

The food looks so yummy!!!!

Did you see the gorgeous wee cups and saucers they sell at fifteen? That is such a shame about your experience, such is the way of things at times though. I had such an amazing meal at Gordon Ramsay's now gone Glasgow restaurant but the experience made me not want to go back, which is how he went out of business. Great food...actually, wondrous food but the service, the cost and the attitude made it sink.

You should go to Nobu and try their black cod!! Mmmm mmm.

Thank you for the lovely birthday wishes. xx

Yay! I'm glad that you had better luck here... I think the one I went to in Oxford was the Italian one too - it was more casual and just plain good food! :)

I'm glad Jamie had a chance to redeem himself. And for less than the cost of one meal at Fifteen, no less! The portions look larger too.

Thank goodness he redeemed himself! I too enjoy coming along your food journeys :)

I´m glad you wrote about this experience after the failure. Makes me think of him better too.
I love to watch his cooking shows too!

Yay, glad this experience was better.

I love tomatoes and mozzerella. So good.

Thanks for coming over today and making my SIT's Day so special!

Blessings to you,
lana @ www.ilovemy5kids.blogspot.com

Nice review. Pasta looks fab! I am on a diet and need to stop reading about food...

I hope you went to Liberty when you were in London!

Mmmm! Now this is a restaurant that I would truly enjoy! :)

Go Jamie! SO glad he got to redeem himself.

I am enjoying your fascinating blog. As a nomad myself and a collector of characters I think you are doing a wonderful thing. I will be following you on your travels and wish you bon voyage from France!