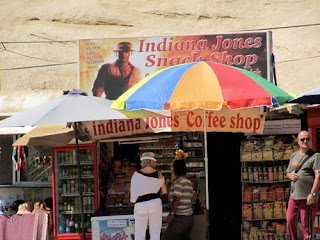 From the moment Hubby announced we were moving to Egypt, he talked about visiting Petra in Jordan. Petra is perhaps best known as being where the Holy Grail was hidden in the movie “Indiana Jones and the Last Crusade.” This fact is not lost on the local vendors who would probably have copyright infringement suits on their hands if George Lucas ever visited.

Tickets were available for one, two, or three-day visits. While you definitely can’t see all of Petra in one day, the mere fact that you have to walk all the way in and out each time makes returning day after day a little daunting. Although there were plenty of guides waiting to be hired, Hubby and I once again elected to go solo on our tour of this historic site. We purchased our tickets and a small brochure, which laid out our route and gave brief details about the most significant things we would see. 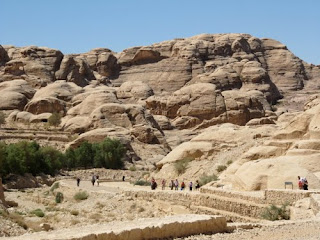 We had done at least a little homework before heading out on this adventure. Hubby wore his Akubra (which totally looks like Indy’s hat) and I had a nice big floppy hat as protection too. We also packed water, snacks, and sunscreen. We supplemented the water as needed and ended up consuming three liters of water each in addition to two sodas each. The latter were mostly at my urging since the mini muffins I stole from the hotel’s breakfast buffet brought were not nearly enough sustenance to get me through our five hour walk.

More importantly, we also wore sturdy shoes to get us through the gravelly terrain ahead. By the time we left Petra our shoes and the bottoms of our trousers were coated in dust at least an inch thick. I was beyond words when I saw people starting their decent into the valley wearing flip flops and tank tops – even I put on sunscreen about half way through after Hubby noticed a decidedly pink tinge to my arms. But I’m getting ahead of myself. 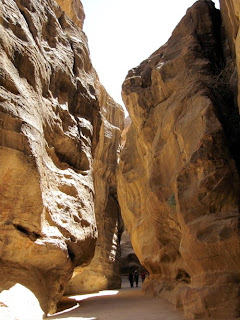 Based on advice from my parents who visited in January, we eschewed the horse drawn carts and began the decent downhill toward the Siq on foot. I am loath to sound flip but there was literally something to gape at every few feet. From the dwellings hollowed out of mountain to natural and made man carvings that looked like they may have inspired George Lucas’s Indiana Jones movies. And we hadn’t even reached the Treasury yet!

Around a few more corners we blissfully and finally reached some shady protection from the harsh Jordanian sun. The Siq is the long, narrow gorge that leads to the Al Khazneh (the Treasury). No more than three to four meters wide in places this long walkway is a natural split between two sandstone cliffs. 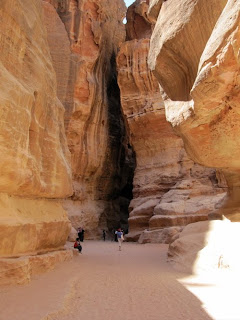 The cliffs themselves are worth the visit to Petra. Words cannot do justice to the natural beauty waiting to be found during this one-mile portion of our walk. From carvings in the sandstone to natural formations that, to this whimsical blogger, looked like faces, Hubby and I shot almost 100 photos in the Siq alone.

The stone here has a marvelous living quality. From the melting wax tops to the impression of roots just beneath the sandstone surface, I sincerely could have spent all day simply taking in the breathtaking sights of this one small portion of Petra.

I have a strict policy of not posting photos of myself or Hubby on this blog that I seriously thought about breaking for this post. The light quality in the Siq is 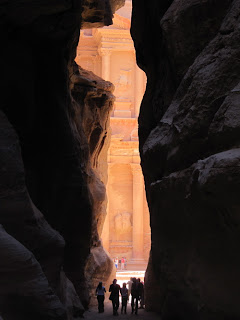 stunning and resulted in some of the best photos we’ve ever taken of ourselves. I know that sounds braggy but finding photos of myself that I don’t want to delete immediately upon viewing is tough for me. Something about the reflection of the yellow rays of light off the orange stone created a unique play of light and shadow that was so subtly dramatic that it took uploading our photos for us to truly appreciate it.

Little did we know that by the time we reached the final steps of the Siq, we had barely begun our tour of Petra. Ahead of us, partially hidden by the cavernous sandstone, was what we had come all this way to see: the Treasury. The gleaming shaft of light that tore the cliffs in two beckoned us like the Grail itself. We had only to take those last few steps into the glowing radiance of the sun’s rays to fulfill the dream that had brought us this far.
Posted by MsTypo at 10:18 PM

And The Treasury is only the first of the glories to be seen in Petra.
merthyrmum
{I've never been the first post before! :)}

The pictures you did share are just amazing...and that view of the Treasury from the sandstone...incredible!

So...how was the walk?? Was it exhausting? Handicapped accessible?

A wonderful article - can't wait to read the second part. I read much about Petra since it's one of the places still on my wish list - but I am not aware that I read somewhere the way in was so long. What an adventure!

Great description and shots. I love the glowing stone in your photos.

Aww, if you'd gone a few months ago I could have met you there. Just saw your news about Norway. AWESOME!!!! I am kinda jealous. I'm half Norwegian but have never been. Maybe I can come visit you hehehe. I look forward to hearing about your life there. I hope you like xcountry skiing and ice skating!

Ah Norway. When is the move?

I have never been to Petra so impatiently waiting your next steps..

Oh, it st here a second part to this? It ended almost like a cliffhanger.;)
Seeing Petra and the Egyptian Pyramids is my life long dream. It will most likely never happen as I hate to fly and I can not see myself taking boats or trains or cars, (horses?) to these destinations. So, posts like yours are as close as I will ever get and very much appreciated.;))
Beautifully written and I love the pictures.
xo

Cannot wait to see your photos of the Treasury and all the other great places at Petra. Cannot!

Can't wait for Part II. Years ago, I remembering putting Petra on my must-see list. Now I remember why.
Can't wait... are you posting it soon? :-)

Can't wait for part 2 either.
Amazing!!

WOW! Have loved reading your stories while I rehabilitate ... my physio is a monster! - only kidding ;-)
Thank you!

Wow! I'm so loving your photos and descriptions! Looking forward to the next set!

Wow!! What a great experience!!

Glad you got to fulfill this dream! What a fantastic one it is.

Wow, those pics are wonderful. It's a place I'd love to visit someday.

You are very descriptive and I loved reading this post. Can´t wait to see more!

Even though we'll have the option of doing a one, two or three day pass. Uh uh, no way. one day is enough. and yes, a picture i actually like of myself? priceless!

Seriously, you enlighten me to think of visiting places that would never even cross my mind...

I am so jealous! I was hanging on to every word! It sounds like a marvelous time!

So amazing! I'd love the chance to travel the world. Though I think I'd be too scared to live in Egypt!

Thanks for stopping by my blog.

I was so busy looking at the stones on the side of that last picture that I almost missed what was in front. Gorgeous! Wish I could see more of it.

I wish you would've broken your rule about posting pix of yourself. I have an image in my head of what you look like but it's probably totally wrong.

I don't like pictures of myself either. I went through a very short time when I was photogenic and I'm not sure what happened but sadly I am in no way photogenic now!

I'm so excited for your big move! And so thankful that you share all these great adventures with us. Heaven knows I probably will never see any of these amazing places!

I so want to go! We have been thinking of sitting still this weekend and avoiding crowded places - because most everyone in the country is probably on holiday for the Eid, but you make me want to gas up the truck and get on the road right now!

Wow. Those cliffs are breathtaking.

That is amazing! I really envy your globe trotter life:)

Your blog keeps getting better and better! Your older articles are not as good as newer ones you have a lot more creativity and originality now keep it up!

I just realized you haven't been back here for awhile (saw the spam links still up) but noticed that links are allowed. So am re-sending the note I wrote last week.

And we have similar cameras, mine is a Canon SX10 IS but you have more gorgeous exposures than I got inside the Siq. I felt as you did - the Siq alone was just amazing.

We were on our feet from 9:15 to 4:45 except for lunch and did not take the hour's walk up the steps in that mid-day heat. I guess you went earlier than November?

At any rate, I don't have the discipline you do and posted over 100 photos at http://bit.ly/petraphotos and they are impossible to look at (too many), so I usually recommend that interested people who might be planning to go there and want to know what the walk was like can choose the slideshow instead at http://bit.ly/petraslideshow.

I would love to see the other pics you took. Let me know if you do put more up. Love the shots here. Great use of light and terrific composition - especially the silhouettes at the Siq facing the Treasury bldg. AND very much enjoyed your writing.