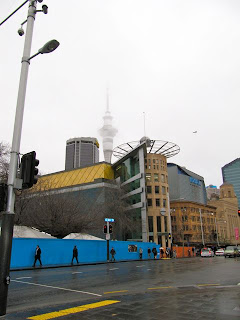 This post marks the beginning of what I hope will become an Internet rumor that within a month or two becomes an Internet truth. Here goes: Auckland is Māori for rain. As rumors go, it doesn’t seem too big or important but as someone who lived there for three months it seems incredibly and unerringly true.

Kiwis reading this are undoubtedly yelling at their screens that it is my own fault that I chose to visit this fabulous country in the middle of winter. It was, I confess, my own conceit when I believed that no “southern hemisphere winter” could impress a Canuck who just survived a snowy winter in Oslo, Norway. Yet the dampness of Auckland had me kvetching like no torrent of snow ever could. One of my flat mates even had to use the oven to dry out his shoes from the omnipresent moisture one day. With those admissions on record, I just have to say that I am officially and utterly over any weather pattern that involves rain!

Of course, it was the rain that helped push me from long term tourist to an official (by my personal standards) local. 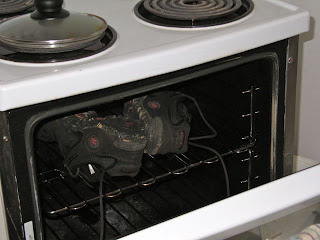 I wasn’t initially certain if living in Auckland as an overgrown backpacker counted as “officially” living in New Zealand. While I did have a mailing address, I wasn’t there for very long, didn’t have a job, nor did I stay long enough to develop one of my patented faux accents. Yet when one looks back on my “homes” over the last five years, one thing theme is evident: water and the many ways it can drive me insane.

In India we literally had a hole in the wall that caused a flood in our guest room. In Kenya, I loved the sound of rain on the tin roof but it always caused heart palpitations since there were several gaps in said roof that caused it to rain in the living room. Egypt was home to the pipes that stopped providing water on a semi-regular basis shortly before we moved. Not, as one might think, due to a drought but simply because the fifth floor didn’t seem to deserve water on the days when my maid was scheduled to work. In Norway, our water problems were brought on by the washing machine we bought shortly after arriving. Due to a comedy of errors, I ended up partially installing the machine myself and two or three floods later can safely say that I am an awesome plumber when the need for clean clothes outweighs my need to be a girly girl.

Which brings us to New Zealand and its never-ending pattern of rain. The owners had only recently renovated the house where I lived and I was among the first people to live there. My little corner room had a large bed, small wardrobe, a desk, a tiny window, and two exterior walls. The latter would prove to be my downfall as the rainy season persisted in Auckland.

It turned out that the eaves of the house weren’t quite up to code. Or maybe it was the mortar in the walls or simply the rain gods who so enjoy mocking me but almost every time it rained in Auckland, it rained in my room. Not simple holes in the roof, but cracks in the foundation that would find rivulets of moisture tracking their way down the walls and gathering in yellow puddles in the freshly painted white floor. Dots of mold formed on the venetian blinds and even on my suitcase as the problem persisted week after rainy week.

My landlord’s solution was to plant towels throughout my space but even these eventually fell to the power of the rain gods who were not about to be thwarted in their quest to make me feel at home with H20 related miseries.

Lest you think the indoor rain made life unbearable, allow me to ease your fears: after a while I simply learned to ignore it. After years of water-themed headaches (starting with Poseidon trying to kidnap me on a trip to Mexico as a child), I refused to be beaten by something as mundane as poor masonry. Despite the fact that I still don’t know what Auckland looks like without the shield of omnipresent rainclouds, I loved living there. If the water gods trying to make me miserable is the standard bearer of my past, then I guess Auckland was, if only briefly, home.
Posted by MsTypo at 2:45 AM

When I was growing up in South Wales ( not NSW but Wales UK), I always seemed to have "damp" in my room--usually associated with the chimney in my bedroom but after all, it tended to rain or snow most of the time in Wales!
Enjoy the sunshine when you can,
merthyrmum