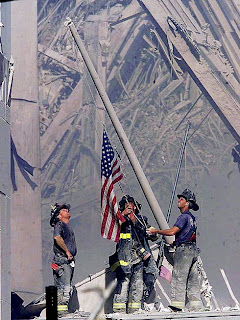 I was surprised to look at the calendar earlier this week to see it was September 11th again. It has been nine years since that day but even the date manages to chill me and serve as a constant reminder of the events that changed American history. Horror had a new name that day as my coworkers and I listened to events unfold on radios throughout the office. We were all paralyzed by what we heard and waited for some unseen force to turn back the hands of time and undo what was happening.

So many people died nine years ago today. They were mourned by friends, family, and even strangers around the world who stood and grieved for the senseless losses. They remain lost to us and nothing we do can change that. Avenging their deaths won’t bring them back. Nor will denying people their rights or hating blindly.

I wonder what some of those people did that morning. Did they remember to kiss their children on the forehead as they headed out the door? Did they say, “I love you,” to their wives before they picked up their briefcases? Did they cut people off on the road because they were running late to the office? Did they laugh at something funny in the newspaper while they sat on the train? Did they give the bum on the corner a nickel of their change from Starbucks? Did they curse their boss as they snuck into the morning meeting five minutes late?

Nine years ago, 2,996 people died. When most of them woke up that morning, they had no idea what fate awaited them and acted as if that Tuesday were just like any other. The small transgressions of each day passed because those weren’t supposed to be their last moments on earth.

No matter how much we wish for it, we cannot change the events of that morning. All we can do is learn from them. It sounds trite, perhaps, but the lesson of that day shouldn’t be about lashing out blindly, looking for someone to blame. The true legacy of the victims of 9/11 should be to live each day as if it were our last: to share our gifts with those around us so that we can be remembered for how we embraced life and lived each moment to its fullest.

Not, how did he die, but how did he live?
Not, what did he gain, but what did he give?
These are the units to measure the worth
Of a man as a man, regardless of birth.
Not what was his church, nor what was his creed?
But had he befriended those really in need?
Was he ever ready, with word of good cheer,
To bring back a smile, to banish a tear?
Not what did the sketch in the newspaper say,
But how many were sorry when he passed away?

Senseless violence always seems to be with us.

Let us be thankful for what we have and for those friends and family that cherish us.

Great post. Thanks for remembering this day on your blog. It is definitely a day I will never forget.

Excellent post. It is so important for us to always remember the importance of this day.

Thank you for posting this, it's so important to remember.

I don't think the importance of this day ever really hit me until a year later. It all seemed so far away because it was across the country and I didn't see the devastation in person, only on the news and in the papers. But I had a pen pal who lived in the heart of NY when it all happened. I heard from her shortly after and she basically just said that she was fine. A year later though, she went into detail about the anniversary of the day and how it affected her and what she experienced on that day. That's when it really dawned on me just how important it was never to forget.