Around Sydney in 500 Words

I realize I’m verbose which is why I’ve set myself the goal of sharing the following photos without explaining or talking them to death like I usually do. 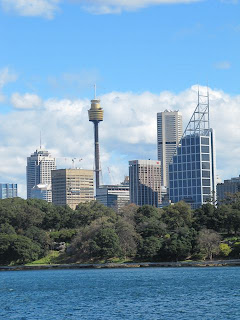 I don’t have much to say about this photo. Sydney is a beautiful city that stretches for miles in virtually every direction. One of the best ways to appreciate the city is by water. So hop on one of the many ferries to Manly, Bondi, or points in between and soak in the breathtaking scenery. 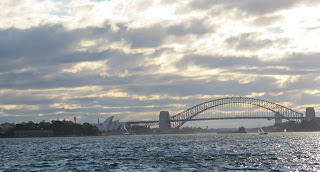 I crossed the Sydney Harbour Bridge twice one day with my friend LoJo. While I’m not brave enough to walk along its exterior, the option is there for those with steady nerves and deep pockets. 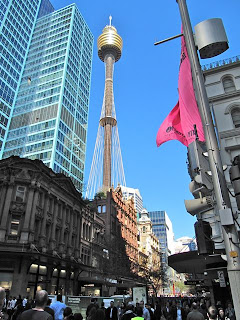 Unlike the CN Tower in Toronto or Eiffel Tower in Paris, Sydney Tower doesn’t dominate the skyline or mental image of Sydney. At 305 meters high it can be seen throughout the CBD peeking out from behind newer office buildings downtown yet remains a must-see for tourists. For the truly daring there is even a Skywalk to tour the outer perimeter at a scary 268 meters up. 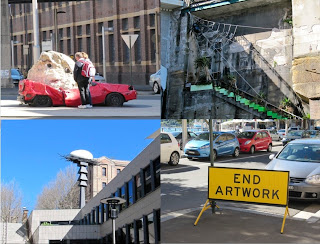 I have always been a fan of random sculpture art and Sydney doesn’t disappoint in this area. A brief tour of The Rocks finds a new sample of modern art behind and attached to buildings where you least expect them. 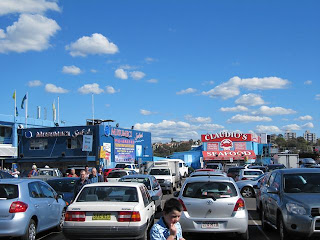 BBS and I visited the Sydney Fish Market with our wonderful cousin and his wife. Anyone who likes seafood even a little must visit the Fish Market where the fresh fish and seafood are beyond tempting. Freshly sliced sashimi, huge freshly shucked oysters, massive prawns, prehistorically large crab legs, and every fish you’ve never heard of are on display and ready to be brought home and popped “on the barbie.” No kitchen in your hotel? No problem! There are dozens of restaurants small and large with the fresh catch of the day on the board ready for a quick snack or a sizeable meal. 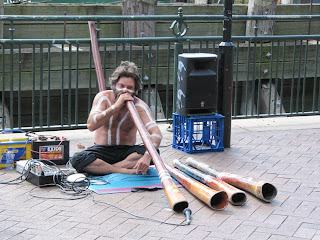 In much the same way that visitors to Kenya insisted on buying six foot tall giraffe’s that never fit the in overhead, many people who come to Australia feel the need to buy a didgeridoo. Most days, buskers along Circular Quay can be heard playing the Aboriginal instrument. I understand from a friend who sells them in her shop that they are surprisingly difficult to play.

The ten-year anniversary of the 2000 Sydney Olympic Games was on September 15th of this year. Olympic Park is still well maintained and worth a visit out to its grounds. LoJo told me about the exhilaration of being there during the Games to watch the events unfold in person. She described the chill and pride she felt hearing 120,000 people yell, “Aussie! Aussie! Aussie!” and reply, “Oy! Oy! Oy!” in the stands of Stadium Australia ten years ago.
Posted by MsTypo at 7:01 PM

Got to have a didgeridoo!!
Great photos too.
merthyrmum

I love your blog because I don't have the means to travel like you do but I feel like I've been all over the world just from all of the pictures you've posted from all the places you've been.

I wonder who LoJo could be?

That artwork is fabulous. How come I never see stuff like that! You've got a talent for finding it.

Hope you got up to the observation deck in Sydney Tower.

You can use and spell words like verbose and didgeridoo. I am awed.

The pictures all look amazing, Typ0! I've never been to Sydney, but would love to go sometime. It looks fantabulous.